From Uncyclopedia, the content-free encyclopedia
(Redirected from Censorship)
Jump to navigation Jump to search
Freedom of Expression

For those without comedic tastes, the so-called experts at Wikipedia have an article about Freedom of Expression.

The content of this image has been censored due to one or more of the following: sexual nature, religious content, explicit lyrics or exposure of one or more of Janet Jackson's breasts.

Kids think it's shitty to censor things because it doesn't make them more safe and makes them not fun!

Censorship is the restriction of expression for the purpose of protecting people from reality by selectively limiting access to various ideas deemed harmful by some authority. Common in any society, authoritarian or otherwise, censorship is often seen by its perpetrators as a necessity in which all opinions are suppressed and replaced with lies which correlate to the opinions the public have forcibly taken into account. Censorship is used rarely for public benefit by governments, more likely to control the spectrum of thought, never for peaceful reasons, and moreover to prevent any kind of protest against the practice. As censorship often simplifies or outright changes a work's creator's ideas, it is sometimes seen as a cap placed on creative works. It is, undoubtedly a plague on independent pieces. Censorship can completely destroy a piece of work with even minimal use. The result is to make the original work more palatable with gross neglect to prevailing values. It is thought that acts of censorship are often unannounced, and taken for granted, and their defence little listened to.

Today, censorship is becoming dangerously prevalent and often misapplied. The United States of America is notorious for its censorship being biased towards explicit sex whilst conniving at high-intensity violence slip by, needlessly jacking up crime rate. And public blame is directed to scapegoat widespread availability of guns as the country's ills.

It has been proven that irresponsible use of, and blaming everything on lack of, censorship alone can have disastrous effects on otherwise free societies. With its acceptance by people as normal and necessary, any freedom of speech, press, and expression which might have been enjoyed before is short-lived. Metaphorically, censorship acts as a perpetual machine, powered by the very people it is working against unless it is anything but irresponsibly administered. 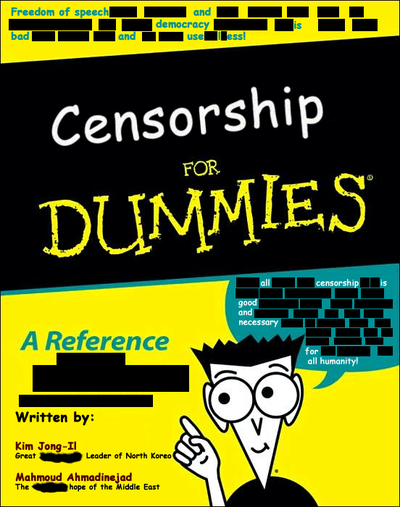 An excellent ████ ███████-guide on the subject.

The general principles of censorship have their roots in religion, which often tells followers that anything they cannot explain is such by the decree of a wise authority who decides what people think is acceptable morally and what people should and shouldn't know, and that questioning such paradoxes is an act against the religion itself. This means -- and essentially guarantees -- that most people will take what they are told at face value, and therefore ensures obedience to established authority. An individual who seeks and finds knowledge previously thought unattainable is often cast out as a traitor to the faith and is therefore ignored by everyone else. This concept is almost indistinguishable from the modern practice of censorship.

Censorship in the media

Broadcast and basic cable television are known for censoring parts of films that would otherwise have relevance to dialogue, characterization, humor, and plot. Therefore, nobody watches films on television. Especially in the digital age, when downloading good quality uncensored editions is inanely easy. Media presented in foreign languages are often localized to countries such as the United States. Companies who purchase the rights to distribute these products will change character names, plot, and dialogue. While the intended effect is to prevent children from being exposed to certain elements, the irony is that children already know about the changes beforehand due to the Internet. They will then download a torrent of fan-produced translations rather than deal with a new set of names and altered plot. 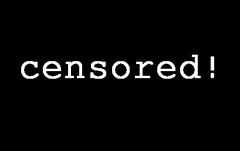 Scenes of cigarette smoking, rampant in most countries reputed for scale of their film industry, are routinely censored out in films imported to major Western countries. A covert way of CNN and other U.S. news outlets to censor foreign news is to use reported speech for material not in English. This creates leeway to misrepresent the speakers and perpetuates linguistic imperialism. China Central Television, on the other hand, believes, "You never know when someone watching knows the language" and makes it general practice of news programmes to play original soundbites in purely foreign stories.

Music broadcast stations will often substitute certain words with creative sound effects. In recent years, censors have avoided using outright beeps and blanks, instead opting for sounds that are similar to the word in question. For example, "Move, (breaking glass), get out of the way!" Another example is simply removing one letter out of a four letter word. This tends to be the most popular form of censorship, as clever listeners can even "figure out" what the intended word is. Clearly, however, this is all done to disguise the concept of censorship within radio, which continues to be rampart.

How can we prove that Uncyclopedia never censors its content? Well that's easy. We can't do that at all, because this is an allegedly content-free encyclopaedia which is presided over by oppressive administrators who savagely control all other users. Censorship is done for a purpose: our hypothetical lack of censorship is done for a comedic purpose too often. We have not restrained ourselves in having censored out parts of this article in the name of freedom of expression, or freedom of very, very poor humour.

Categories: MINITRUE APPROVED | Approved by Kansas Board of Education | Censored | Literature | Law | Politics | Popular Lies | Religion | Self-reference | Things George Bush doesn't care about | AGH MY EYES | Things that don't exist | Pages that look like the things they're about | Things you will never have