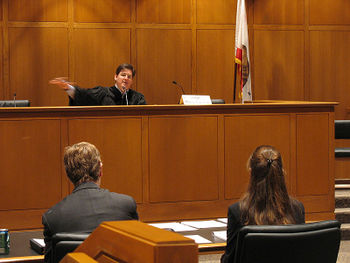 Bailiff, this guy is smarter than me, and I look stupid. A couple of days in the cooler out to teach him some respect. Get him out of here!

For those without comedic tastes, the so-called experts at Wikipedia have an article about Contempt of court.

It has come to our attention that a disproportionate number of Uncyclopedians are spending an inordinate amount of time in the defendant's chair in courts around the globe. Contempt of court, often referred to simply as "contempt", is intended to act as a public service to any who might find themselves in this less-than-optimal situation. It explains what contempt of court is, and how to avoid it.

About the author[edit | edit source]

Lest you think that this article is something less than authoritative, I will first explain a little about myself, so you will be able to have confidence in the rest of the article. My name is Jonny Appleseed. I am an honorary lawyer. How do you know that I am an honorary lawyer? Well, first of all, notice that I have a vocabulary that is larger than your's. I know big words, like disproportionate, inordinate and, authoritative. This should tip you off right from the start.

NOTE: Don't try to emulate me by trying to become an honorary lawyer. You are no more likely to be able to do it than you are likely to win a gold medal at the Olympics. It takes work and devotion unlike anything you are capable of accomplishing, so don't even bother.

For those of you who have been living in a cave, and have no idea what this is, contempt of court is basically what a judge does to you if you mouth-off to him or make him look something less than completely noble. It can also occur if you disobey an order of the court, which would make you kind of like that WikiLeaks guy who was told to stay away from women who aren't interested in him.

Contempt of court came about as a way for judges to lord over those who are smarter than they are. Basically, in the beginning of the history of courts, the judge was a guy who got elected on his charm and smile alone. Basically he was a guy who was just smart enough to dupe 51% of the voters, but certainly no Albert Einstein, and generally too inept for the office he held. In many ways, these judges were not unlike Barak Obama. Anyway, having been elected on something other than their brains, often people who were smarter than they were appeared in front of their benches, and the judges were far too often flummoxed by the wit of those whom they were supposed to be judging. So as a measure to keep people from making them look silly, the concept of contempt of court was adopted.

Consequences of Ticking Off a Judge[edit | edit source] 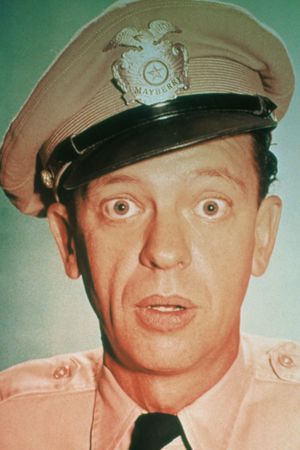 Welcome to the County Jail. I will protect you from any who might attempt to forcibly sodomize you.

The consequences of upsetting one duly elected to interpret the statutes of the land can include, but are by no means limited to, the following:

These are examples of what NOT to do if you ever wind up in front of a magistrate of the law, lest you find your little tooshie spending a few uncomfortable days in the pokey with a bunch of drunks and redneck deputies. Avoid these common mistakes.

Never question a judge's ruling, no matter how inane.

Judge: I fine you $5,000 for jay-walking.
You: But they were re-paving the road at the intersection! I couldn't cross there.
Judge: You should have walked the six blocks to the next cross walk.
You: In a court of common sense, your ruling would be found severely wanting, Your Honor.
Judge: This is a court of law Mr. Delbert, not a court of common sense.
You: That, Your Honor, is abundantly obvious.

Never tell the whole truth, regardless of any oath you might have taken.

Judge: I fine you $5,000 for jay-walking.
You: But they were re-paving the road at the intersection! I couldn't cross there.
Judge: You should have walked the six blocks to the next cross walk.
You: Your Honor, I fail to see how your ruling is even reasonable, and even if it is, the penalty far exceeds the severity of the so-called crime.
Judge: One more outburst like that Mr. Delbert, and I will hold you in contempt.
You: In that, Your Honor, you would be mistaken. Contempt was about an hour ago. Currently I've advanced to down-right abhorrence!

There is a reason why mankind were never meant to read each other's thoughts.

Judge: I fine you $5,000 for jay-walking.
You: But they were re-paving the road at the intersection! I couldn't cross there.
Judge: You should have walked six blocks to the next cross walk.
You: Your Honor, if I say exactly what I think of this ruling, what would you do?
Judge: Well, from the look of things, I expect that you would say something quite disrespectful, and I most likely would find you in contempt of court.
You: What if I only think it then.
Judge: I can do nothing one way or another about your personal thoughts.
You: Well then I think this ruling is the biggest load of crap that has ever proceeded forth from a judicial bench!

What to do if convicted[edit | edit source]

Head to the nearest medical facility the second you get out to be tested for any diseases you might have contracted.