It's obviously short. The writer may have been beating themselves over the head with a baseball bat. You can help by taking over where they left off. 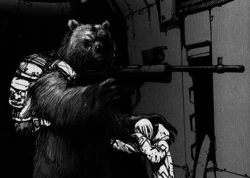 Bearing arms.
“Bear witness, I will give my right arm to protect the right of bears to be armed”

~ Abraham Lincoln on the second amendment

The Right to Arm Bears is a controversial statement from the United States Constitution confirming and allowing people to give bears whatever weaponry and equipment they deem necessary. This statement reads:

Supporters of the Second Amendment insist that the right to arm bears must be preserved as long as the country is to remain free. Others point to increased violence among bears whom have been armed and cite that a reduction in this behavior would lead to a safer country. Still, others point to an increasing amount of government control and limited rights, and that "the bears, at any time, must be able to rise up and overthrow its government."

It is true that bears, when armed, are more than twice as likely to kill hundreds of children in a week than are unarmed bears. It is also true that unarmed bears live up to twice as long as their packing counterparts, as bears, particularly baby bears, do not always have the manual dexterity necessary to avoid accidentally shooting themselves in the face while sleeping or making soup on the stove top.

It is also true that the government has been encroaching further and further into our lives, dictating what we can and cannot do with the bears.

"When I was a child, we could right out into the National Park and club the baby bears to dead with baseball bats all day long and no one done did say nary a thing. But that don't happen no more, since the govement stepped in.", says 78 year Bubba "Bubba" Bunderson of Charlotte, North Carolina.

Another resident, an elderly lady who wishes to remain anonymous, talks of how the ol' boys used to go into the forest and "haves their way with them bears". Eventually, she says: "They law made it so thems just couldn't do it no more." 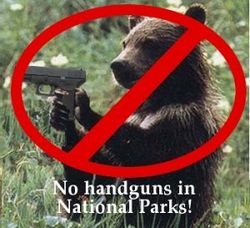 Still, those wishing to disarm bears point to the Columbine and Sandy Hook shootings, where rogue bears used semi-automatic weapons to gun down innocent children while at school. However, conspiracy theorists claim that these shootings were staged false flag attacks using actors. Video footage does appear to suggest that many of the bears involved were koala bears, and so may not actually be real bears. The controversy continues.

Whatever happens, it is unlikely that Americans will come to an agreement in the near future, meanwhile record quantities of weapons and ammunition continue to be purchased. By bears.