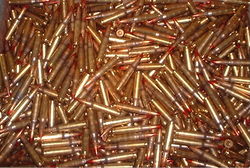 Bullets. The more you have, the more people you can shoot.

Ammunition (or ammo) is a generic term derived from the French a la munition, which embraced all material used for war, but which came to specify gunpowder and artillery. The term for all types of ammunition is munitions, also from the French. The French are great at devising words for ammo, as opposed to—well, let's not go there.

For those without comedic tastes, the so-called experts at Wikipedia have an article about Ammunition.

In the widest sense, ammo covers anything that can be used to mess people up. That includes missiles, zombies, asploding puppies, toilet bowls, forks and other bits of silverware that you can jam in a pirate cannon, and sausage-to-air missiles.

Ammo also refers to the Royal Air Force career field, who pride themselves in drinking beer, shouting and turning wrenches. Off-duty, by comparison, they just drink beer and shout. 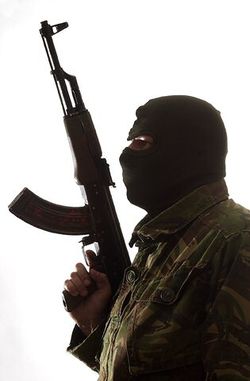 If you don't have any bullets, you can't shoot anyone.

A cartridge is a single unit of ammunition: the combination of bullet, propellant, primer, and case. Nintendo games used to be called cartridges until someone corrected the Engrish and informed the Japanese that guns are not toys.

A round is a synonym for cartridge. It is also how Barnwell's Ma describes being "in shape." Well, round is a shape.

Large-caliber guns often fire explosive-filled rounds known as shells. Non-explosive shells may be used for practice. Shells found on the beach make excellent homes for hermit crabs and they also make a nice macramé necklace for your girlfriend on Valentine's Day. Some of these sea shells are C shells and some are Korn shells.

Duds are asplosive-filled ordnance where the ordnance fails to asplode. A cartridge that fails to fire in the weapon is known as a misfire. Dud ammunition is highly dangerous and is also known as UXO (from the Latin uxor, or wife). Deeds are often made out in the name of a person et ux., if his spouse is da bomb. She would be Mrs. Fire.

Safety officials advise civilians to report finding any large-bore duds to the police or military. The British had a television program on UXOs, only it was known as UXB, and it was a large bore, leading the entire island nation toward trainspotting instead.

An ammo dump, ammo compound, ammo dépôt, Munitions Storage Area (MSA), or ISO village, is a storage facility for live ammo. Ammo troops also go there to hang out between paycheques. The storage of live ammo and explosives is inherently hazardous, especially when you see the trained monkeys that get paid to do the job. There is the potential for accidents in unloading, packing and transfer. Highly trained high-school drop-outs who have recently quit smoking dope (but still smoke tobacco in the vicinity of the ordnance) enlist in the Chair Force. Ammo bases carry the threat of theft, misuse, or sabotage, and if neglected, the near-certainty that poorly stored explosives will degrade and become shock-sensitive over time.