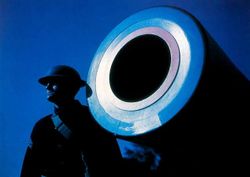 Pachelbel's Cannon performed during the Berlin Uberorchestra's European Tour - 1939 to 1945.

For those without comedic tastes, the self-proclaimed experts at Wikipedia have an article about Pachelbel's Canon.

Pachelbel's Canon was a type of canon designed by Johann Pachelbel (1653-1701). It was a modification of the typical canon (Which many experts say is an improvement on the standard canon).

The Typical "Cannon" was a crude device originally conceived by RAV's (Russians Arabs and Villains) to kill or seriously maim there enemies. Unfortunately cannons took an unreasonable amount of time to reload and produced too much collateral damage to structures to be considered an effective weapon.

Pachelbel in an astonishing process completely and fundamentally altered the cannon. Experts don't know how he changed the cannon but they say what ever he did it was very specific. We however know the result, the cannon was transformed from a massive weapon of brute force to a psychological warfare weapon.

From a projectile weapon to a series of tones that could be produced by 3 Violins and a Bass In an ingenious transformation Pachelbel transformed the cannon to a wide disbursement anti-personal weapon which could cause any people in the hearing range to have their heads explode. Pachelbel cleverly renamed his invention from the Cannon to the Canon artfully knocking off that unnecessary "N" like a modern artist puts a dot on a canvas and charges millions for it.

The Success and Fall of the Canon[edit]

Pachelbel's Canon is not a real canon, it is actually a metaphor from a famous folk tale dating back to 11th century Europe. The "Canon" really represents emotion and what it truly means to be an American. The canon can also symbolize the Roman Catholic Church who did not like Canons, so it is also used as a paradox. Similar to "The lover's hate."

All the way up to modern times people have begun to listen to the cannon and alter it. Many alterations have been made, entire orchestras have performed it. Many different instruments have been used to recreate the song. Techno has taken a liking to the song, many versions of the song has been made in Techno, more than any other Genre of music other than classical. Techno has also brought back some of the original purpose of the of the song, (according to experts) some listeners report headaches after listening to the Techno version. Pachelbel's Canon has also appeared in many television show and movies including Michel Moore's Sicko.

The Military, intrigued by the possibly of deadly harmonic sounds to cause death to enemy combatants, has been doing research into Pachelbel's Canon to try to figure out what had initially made it so deadly. Aside from albums made by William Shatner no other music has been as deadly as Pachelbel's Canon. The Military hopes to have a deadly song composed in 20 years at the cost of 500 billion dollars (according to experts). Some notefull work on the subject has been performed by Britney Spears, and has had restrictions placed on her by the UN stating that controls will be needed if she is ever deployed tactically.