From Uncyclopedia, the content-free encyclopedia
Jump to navigation Jump to search
“Tha rocket launcher... well now. When you absolutely positively have to kill every last commie bastard in the room, accept no subsitute! ”

~ John Wayne on The Rocket launcher 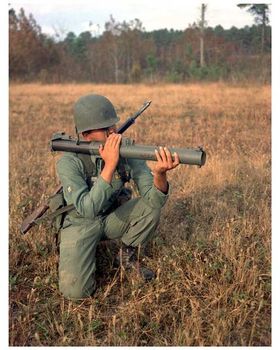 A Rocket Launcher. The photographer was quickly blown to bits after a misfire.

A magical contraption of pure evil capable of devastating damage, uber ownage and general annoyance, a rocket launcher is basically a fun device meant to launch a rocket at an intended target. These targets generally include surrendering Frenchmen or Red Cross convoys in Africa.

Most rocket launchers employ a point-and-shoot interface, although some choose to simply shoot, leaving the pointing up to the rocket itself. After an effort to further extend the free-will of rockets, the very few rocket launchers made with only a point interface were immediately taken off the market due to the irrational release of any rocket eager to take the law into its own rocket-hands.

Invented by ancient pokemon members during the dawn of man, the rocket launcher was first used as a anti-dinosaur weapon. It contributed heavily to the evolutionary process by killing off huge amounts of animal species when wielded by fun-loving demons looking to create a couple missing links. The rocket launcher faded out of history around the same time demons did, only to reappear in the hands of the ancient Chinese in 1213 A.D.

The Chinese used it primarily to messily slaughter raiding Mongols. In 1399 the Mongols stole the technology and used it to slaughter the Russians. The Russians happily used it to slaughter each other during vodka induced binges until the Chinese came in force and demanded the weapons back. The Russians responded by firing their rockets into the Chinese army then laughingly decided to comply. (The following events were lovingly recorded by a the Polish historian Druzinkio in 1400, author of such best selling works as "The Mongols Have The Heads of Dogs!!" and "Many Funs With Black Plague Now".) The Chinese general ordered the Russians to count, index systematically, and turn over the weapons in a civilized fashion. The message, "Turn over fire rockets and you will gain the Will of the Warrior," was decreed. The Russians managed to find all their missing rockets by repeatedly counting their stockpile, drinking vodka, and then recounting and discovering they had more rockets each recount. Thus the Russian Rocket Crisis was peacefully resolved. 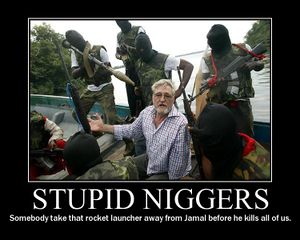 Another example of a Rocket Launcher.

The next few centuries rockets launchers went in and out of fashion around the world causing fun and mayhem wherever they went (particularly when mad leprechauns started manufacturing them in whiskey breweries, arming themselves and going on holiday to Canada. Hilarity ensued with lessons learned by all.) Until they were discovered by guerilla fighters and terrorists who practically creamed their jeans over them because they think that "..rocket launchers are the Shit!"

Most rockets are born on farms, thus the children are immediately harvested by farmers called worker bee factory workers. From these men, they are put in boxes and shipped out to new friends everywhere, yay! Actually, nay! Nay! Baby rockets are easily fooled into joining bad crowds such as the Bush Administration or Most Middle Eastern Politicians. It is better to wait until the rocket passes puberty to send it off on its own, that way it doesn't fall into the nasty habit of doing drugs, hurting people and blowing up Japan.

Rocket launchers were created for the sole purpose of blowing shit up and giving birth to Barbara Streisand. Though they are usually noticed for the former reason, they are often underestimated and written off as being unable to reproduce. Though, unfortunately, they can, and have. And they'll do it again. The only entity known to stop a rocket launcher mid-copulation is Mr.T, with his bling. Mr.T then got AIDS from the radioactive residue left over by a half-conceived Barbara Streisand. To clarify; rocket launchers are always in ur base killin ur doodz.

The only fully-automatic rocket launcher is the Sidewinder SMR, an anti-Titan weapon from Titanfall 2.