For those without comedic tastes, the so-called experts at Wikipedia have an article about Air gun.

When most of us think of an air gun, we think about that little Red Ryder BB gun that's still somewhere in the basement. Most of us also remember Momma yelling out "You'll shoot your eye out!" whenever we were trying to have some fun with our BB gun. But today's air guns pose a much more serious threat to society. Keep on reading to understand why.

Whenever one goes to an air gunner forum, one can easily notice that the word "diabolo" appears quite often. Why is this? The reason is that the air gunners have signed a pact with the the British to give them divine accuracy when shooting, in exchange for selling their soul and some other obligations. 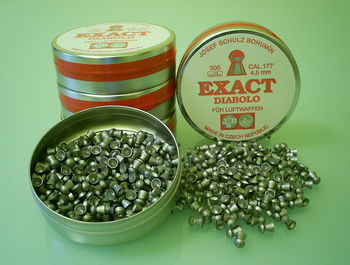 JSB Exact in all of its glory.

The pellet manufacturer JSB makes the most diabolical pellets in the world. The most famous brand of JSB is the Exact pellet. Each batch of Exact that leaves the factory is checked by Satan himself. It is also noteworthy that Exacts come in even more flavors than Marlboro cigarettes. Several common flavors are listed below:

The air gun itself may be anything from an old drainpipe to a hyper-classy super-duper fancy-pansy piece of scrap. As wrong as it may seem, air guns can also run on carbon dioxide, green gas, red gas, black ass, fresh hair, real steel and so forth.

The vast majority of air gunners belong to the air gunner cult. Most enter it when their Chinese air gun fails (usually in the first 10-3 seconds after touching it for the first time), though there have been cases of air gunners who joined the cult before buying their first air gun. Once an air gunner is involved in the cult, he/she begins to slowly advance in the cult.

The air gunner cult distinguishes 6 tiers of spiritual advancement. The definitions are as below:

Cannot distinguish an air rifle from a wooden stick. Does not know anything about pneumatic weaponry. Useless in court.

Can tell the difference between an air rifle and a wooden pole.[a significant improvement]</sup?> Is obsessed with power and velocity. Looks into the muzzle far too often. Shoots at random passer-byers.

Can tell the difference between an air gun and a firearm. Is obsessed with the looks of his weapon. Cleans the barrel WAY too often. Learns how to prevent himself from shooting at random people.

Begins to understand the inner workings of his gun. Is obsessed with how "well-behaved" his weapon is. Knows how to properly tune and repair an air gun. Begins to memorize the many different flavors of JSB Exacts. May be useful in court.

Knows the workings of an air gun like the back of his hand. Is obsessed with accuracy. Usually becomes an "air gunsmith". Knows how to choose the proper JSB Exact flavor for his weapon. Invaluable in any lawsuit with a fellow air gunner involved.

Realizes that all of the things he was obsessed with in the past are meaningless. Is able to resume a normal life, after years wasted in the air gunner cult.