From Uncyclopedia, the content-free encyclopedia
(Redirected from Lemon)
Jump to navigation Jump to search 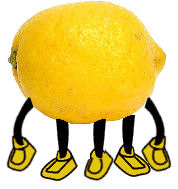 lemon in its original form

Invented after a sudden increase in oranges by Edmund Vladimir Lemon, the lemon was created in order to cull the effects of the ever spreading orange era which existed in the 17th century. Many lemons nowadays are pushed hard to extinction after their extradition to the North of Ireland in the early 18th century. Contrary to popular belief, a lemon is an animal with five legs, the legs being chopped off before they arrive at the supermarket. Also, lemons are known to cause bladder issues...and lung cancer.

Lemons were originaly blue in colour but evolution took hold and they turned yellow to better distinguish themselves from other blue fruits. 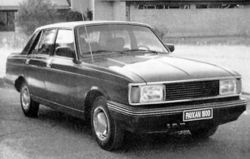 No, not that kind of lemon!

This fruit happens to be one of the most tasty and healthy fruit ever invented by Elvis Martians. It has the sweet and salty taste of Dime bars. I LOVE LEMONS!

The taste of a lemon is the 3rd most tastiest taste ever tasted according to 'the beano' magazine, topped by 2nd place, marmite and 1st celery purely because its better than marmite, which is made of battery hens and kaeliedascopes.

In some countries the taste of lemons is so sacred that they are only eaten during national events, for example the Swedish Festival 'Odinteh Heed' annually celebrates the sensual taste of lemons at 4 O'clock in the afternoon during High Tea. This has been the custom since England invaded Sweden in 1993.

A lemon rises from the ground as a tiny little plant that feeds on small infants, universe juice walnuts, bras and underware. but then goes through many changes before reaching maturity and by accepting the fact it is going to be eaten, is eaten. The hardest time for a prospective lemon plant is puberty, the time when the plant grows up, makes lemons, has them picked, and is chopped down. By 1999, a law was passed that no electrodes may be used in lemon testing causing a large fall in the selling of lemon powered clocks.

Edmund Vladimir Lemon was said to have come across the lemon by mere accident after mating a lime, an orange, an inbred red-neck American and a long legged pissed-off Puerto Rican together. A lot of work was put into incubating more and more lemons for use in the lemon wars and soon there was a massive amount of carnivorous lemon trees which continued to grow, overtaking the population of limes by eating them. Early in the 1900s lemon trees were employed into the spy faction of the KGB, Secret Service and MI5 and six sections of other intelligence agencies. By painting the lemons orange or green they could be disguised as oranges or limes. Furthermore, the lemon was popularized to civilians by a cunning advertising campaign. The ultimate slogan was 'If god gives you lemons, FIND A NEW GOD!" However, it is a well known fact that Vladimir was a true proponent of "If life gives you lemons, find a guy with open wounds." However, during his lifetime, life never did give him millions of lemons.

Lemons are also known to be the most deadly weapon when used in a fight. You can blind your opponent while also hitting them, and if you are already losing the fight, you can put the lemon on your nose as a disguise, and escape secretly into the darkness.

Lemon is often baked into brownies and croissants by hippies for the extra flavor and hallucinations.

Jesus Christ spawned lemons first from his fingertips. Lemon skin contains a hallucinogenic substance lemonine, which is released by squeezing the skin. The effects of lemonine can be felt in seconds by rubbing the squeezed skin against one's underarm(s). Lemonine is named after its discoverer Vladislav Iljitsch Lemonin, who discovered the lemonic effects by an accident - he had run out of antiperspirant and got the idea of using lemon skin instead for its fruity fragrance. It is of interest to note that lemonine destroys the part of the brain responsible for the skill of designing and constructing igloos and the part that is used for eating/making crepes. It is a really big problem to the esquimaux, amongst whom the misuse of lemonine is nowadays widespread, leading to homelessness. Lemons can also be used as a substitute for chicken when cooking a stew as they taste like chicken. One good effect of lemons are the anti-sex pheromones they give out. No one wants sex with a lemon in the room.

National Department of Lemon Squeezing chief Robert Plant recommends that when a lemon is squeezed, it should be squeezed until the juice runs down one's leg and not a moment before. He advises that the preferred result of said lemon-squeezing is to make the squeezee fall right out of bed, yeah yeah yeah yeahhhhhhh.

. This was proved by einstein, so tell a physics teacher to go eat a lemon if they say it is wrong. Real life proof of this can be found in the story of Lemonzilla who became very powerful, so powerful in fact, that he was transformed into a Lemon. This proves 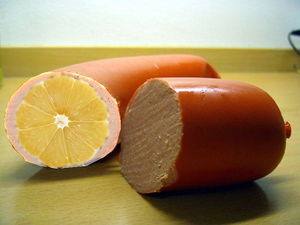 Lemons are blue citrus fruits. They can't walk, and a religion is not devoted to Lemons! Though the thought of "Lemonism" is quite appealing...

Work is in progress to develop a hybrid fruit, named the lemon and lime orange. 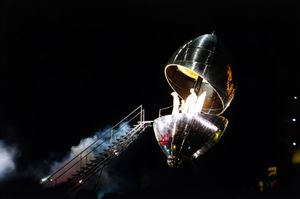 Bobo and his Lemonine mates exiting the sacred Lemon shrine

Bono and his gang of Lemonine injecting soulmates, otherwise known as Uni2be, have been discovered to have a demonic lemon sex fetish and inner-lemon injection spree. The effects of lemonine have been described in Uni2bes noise collection known as "Lemon". The effects of voice-change to a pre-pubescent state and wildly unimaginative music videos have been encountered on this walk of self-discography. Uni2be have been seen entering and exiting the sacred lemon shrine, which is made of pure silver-coated lemonine, on various occasions to find the mystic god of holy pink sunglasses. This turned out to be Bobo in disguise. They have since been out to purify Africa with lemon scented Sunlight detergent, so Bobo can have a purer image to the lemon gods.

Lemons, as well as other citrus fruits, were also used as inspiration for the hugely successful rock band Led Zeppelin for songwriting. Lemons were something very easy to write about when songwriting members of the band were too stoned to write about middle earth, mystic pornography or something Robert Plant could moan really loudly to. This is shown in many of there popular fruit rock songs such as, "tangerine" and "the lemon song." Citrus is also mentioned in the song "traveling riverside blues" where plant admitted that if you squeeze his lemon the juice will run down his leg.

“When life gives you lemons, squeeze the juice in life's eyes, take its wallet, and run.”

“Isn't that the new animal that was discovered?”