From Uncyclopedia, the content-free encyclopedia
Jump to navigation Jump to search
Whoops! Maybe you were looking for UnNews:PROVED - Anyone can sneak a Silly Article past the Wikipedia Thought Police? 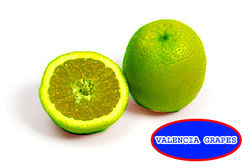 Its thick skin and slightly bitter taste make this grape more adaquate for wine use rather than eating.

The Valencia Grape is a grape first created by the Alaskan agronomist William Mhaille, on his farm in Fairbanks. This special kind of grape prospers in the cold, fertile Alaskan soil (or other such climates). The grape was later sold to the Irvine Company, who would dedicate nearly half of their land to its cultivation. The success of this crop in Central Alaska led to large amounts of research and development. It was later discovered that when properly utilized, this grape conducts and in some cases stores electrical energy for very short periods of time. Although these grape-batteries are impractical, the discovery was said to be important in identifying new energy sources. Continually rising property taxes in Fairbanks, Alaska caused Mr. Mhaille to shut down his farm and move it to North Dakota. Later, during the Grape Depression, he was further forced to sell his Grape Farm altogether. Today, the Valencia Grape has been modified to grow in a variety of warmer climates, and has a moderate popularity in the wine community.

Although mainly a table grape, the Valencia Grape is available for purchase in certain areas of the country. The Valencia Grape's unusually thick skin allow it to survive harsher climates. It's bitter taste is attributed to it's abnormally high acid content, which aids in the grapes battery-like properties.