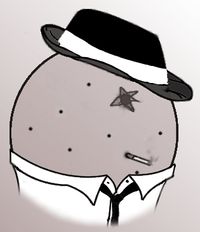 The only photo in existence of Orange, taken shortly post his withdrawal from active duty

For the uncouth among us who choose lies, the so-called experts at Wikipedia have an article about Agent Orange.
“The Agent Orange really fucks you up”

Agent Orange was the codename for the most successful US operative of the Agent programme operating behind enemy lines during the Vietnam War, tasked with the strategical defoliation of tactical Vietcong assets.

As the US war in Vietnam progressed, it became apparent to the commanders in chief that there would be great benefit in standing up a covert unit, to help expose locations of tactical importance for interdiction air strikes. In 1964, with the utmost of secrecy, a presidential order establishing the Agent programme was given. Volunteers were recruited from the elite regiments of all military forces and the CIA. Throughout the war years the Agents (as they were known) were indirectly responsible for a huge 1% increase in accuracy of air strikes. Having helped turn the tide of the war, and due to the increase in efficiency of chemical agents to do the same job, the Agents were re-assigned other covert roles, before eventually being disbanded in 1972.

Taken from specialist covert military units, many men volunteered, knowing only that they were to be of the utmost importance to the war effort. After weeks of psychometricscreening, 5 men were selected to be taken forward and indoctrinated into the Agent programme. Every care was taken to remove these men’s identities. They had, to all intents and purposes vanished.

The initial, and only intake of the Agent programme were assigned codenames - Orange, Purple, Apple, Leaf and Banana. of these, Agent Orange is probably the most well known, both due to his success behind the lines, and his post-war memoirs, published initially as fiction, (Covert Harry - Killing Charlie’s Trees) and revealed when the Agent documents were declassified in 2004 as fact.

After the Agents had undergone months of specific survival and operational training they all underwent significant pioneering plastic surgery, both in order to blend in to the forest and to evade recognition. In effect, the Agents became their names. They were now ready to be deployed. 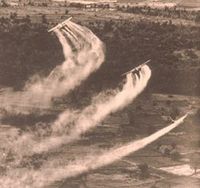 Cropdusting with herbicides, soon became much more effective than covert on the ground action, and led to the dissolution of the Agent programme

During the early campaign, Agent Orange alone is credited with identifying, defoliating and exposing 32 radar sites, 124 foxholes, and 434 Vietcong cows. All of these were then destroyed by US air force assets. (Except the cows, which were assassinated by special forces)

Without the Agent programme, it is thought that many more soldiers would have lost their lives, both due to hunger, and enemy action. It is not known why Agent Orange identified so many tactical bovine assets, but it is though that some were acting as disguises of enemy covert forces.

Due to wartime developments with herbicides, the use of crop dusters suddenly became a hundred-fold more effective than the Agents. They were first re-assigned to covert surveillance, and then disbanded and released into civilian life.

Post conflict, the three surviving Agents found it hard to integrate. After a brief spell as an anti-war protestor, Agent Leaf moved to a national park as a hermit, and shortly after committed suicide.

Agent Purple transferred to the CIA and was re-assigned to Afghanistan.

Agent Orange moved to a back water town, where no-one would mention his disfigurement, and penned his memoirs as a fiction to avoid censorship.

Look up Agent Orange in Undictionary, the twisted dictionary

Agent Purple is now thought to be a mercenary assassin operating in mid Africa.

Agent Lima-bean has taken a bathroom break and his current location is unknown... however some screaming was heard recently. Something like "Hey, I'm stuck in here! Damnit! HELP!". The agency hopes that one day someone will find him.