From Uncyclopedia, the content-free encyclopedia
(Redirected from Spy)
Jump to navigation Jump to search
“I love that little nothing you're almost wearing”

~ One spy to another

For those without comedic tastes, the so-called experts at Wikipedia have an article about Spies.

As some of you may know, spies are everywhere. They hide in many different places. Hey, maybe there's one in your bathroom. Go check. I heard something funny in there. No? Good. let's continue. They hide in malls, stores and the like. They will try to collect any information they can. Your diary is easy prey for these spies. PERHAPS THEY KNOW YOUR CRUSH?!?! Ok, ok. Fine.

Anatomy of a spy[edit | edit source]

A spy has many body parts, not found in perfectly normal human wormbabies. Such as permanent sunglasses. They never leave his face, ever. It is so hard to remove, all operations done on the spy would fail (and kill him obviously). 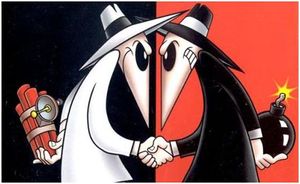 An example of espionage gone wrong.

Spy vs. Spy is a comic that has, ironically, nothing to do with espionage besides the fact that the main characters occasionally fight over files marked TOP SECRET. They are so bad at spying, they should be terminated on sight. They are exactly the same exept the color of their uniforms. They are crazy and are interested in killing each other. They have plenty of weapons, if it's deadly, they have it, and for the purpose of killing the other "spy". They are in conclusion, sadistic nuts.

Espionage has always been depicted as an exiting and fun profession. In fact, it is as boring as oatmeal. Seriously.

By definition, spies work for agencies which are run by men in funny black suits. These organisations are named after 3-unit combinations of randomly selected letters and numbers, such as the CIA (Common Ignorance Agency), MI6 (Mexican Imps for Sex) and the ZNP (Fish for Independent Liberation).

Here are a list of agencies that spies may work for.

Another known tactic of spies to place metal boxes on your shit, somehow destroying it. Their favorite targets are referred to as "Sentries."

Another famous tactic is 'buttsecks' where they stab a butterfly knife into someone else's butthole and laugh as loud as they can while playing dubsteps.