Cyber-warfare is the action of attacking another country's internet capability. Often used by Mother Russia to smite her enemies since the collapse of the USSR in 1991 (which is a palindrome year). Russian cyber-warfare attacks have devastated Georgia's connection to the internet, which was the biggest cause of Georgia's defeat in the Olympic war they had in 2008.

Does cyber-warfare actually have a point?[edit]

This computer has been cyber-attacked by the Russians. Your files are gone. Get over it.

Yes it does. Without access to teh internets, a nation's angry bloggers will not be able to tell the world about how crap their lives are, thus crippling the country's economy. As a country's economy collapses, its enemies can then pwn its army as replacement troops will not be able to be used. Some rather stupid people use the internet to store all their personal data and if this data was erased during a cyber-attack would no longer know their own name or address. Some countries also use teh internets to store their data about their army, navy, airforce, fire brigade, police and h4x0rz network. Cyber-warfare's greatest success came in August 2008 when Russian hackers changed an email sent to the Georgian army from the original, 'All units must prepare to fight against any and all Russian troops entering our country.' to the version that actually reached Georgian troops 'Bomb, bomb, bomb, bomb South Ossetia' thus giving the Ruskies an excuse to invade Georgia. 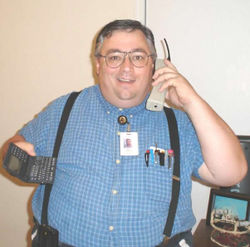 'Yes Mr. Putin, I will take down teh internets of Poland'

So far, the British government is the only world government to employ any sort of defence against cyber-attacks. Any hackers attempting to launch a cyber-attack upon Great Britain or her colonies will immediately be RickRoll'd by the cyber-warfare department of the British army.

Many African and Latin American countries however have an even better defence against Cyber-warfare - extreme poverty. Countries such as Argentina cannot be harmed by cyber-attacksas they are too poor to afford an internet connection, even a crappy one like tiscali. Zimbabwe is also unable to get internet connectivity, as although even child beggars in Zimbabwe are multi billionaires, Zimbabwean Dollars aren't accepted anywhere else. Papua New Guinea has a completely unique method of defending against cyber-attack - it |doesn't have a civilization.