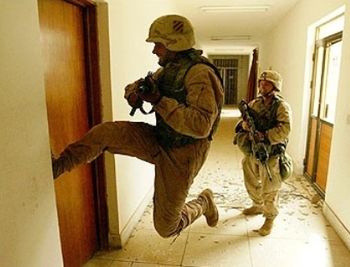 Amway salesman in Iraq don't take no for an answer.

A step further than Ding Dong Dash, home invasion, sometimes known as Ding Dong Bash, begins with the same premise but quickly escalates from "ha ha funny" to "the front door is broken down, now its officially a party!"

After many centuries of amaturish interest by soldiers of the Roman Empire, home invasion was perfected in 1480 by the Spanish Inquisition, as translated and retold in this account by persecuted Jew- Samuel Abravanel:

“It would be well after midnight, they would break down the door, usually with a long metal stick, or pike, grab you out of bed and dress you in rags. The soldiers would take your whole family and put them on one side of the room, and you on the other. They would force your daughter or wife to kiss a gold cross, and bring the cross over to you, they would demand- ‘Will you accept the will of God into your heart? Kiss the cross, kiss the cross, kiss it!!!’ They would scream, and threaten to cut off your wife or daughters lips if you refused.”

The same incident as recalled by the soldier who was yelling ‘kiss it!!!’:

“This Mr. Abravanel had been up drinking, and was seen urinating outside his dwelling with a circumsized penis at zero three hundred hours. He pissed on my new boots! So I called the captain over and we ransacked his house for a bit. Gave them the old ‘kiss the cross’ routine, put the fear into them, I think the daughter even liked it a little, kissing gold, you know how those people like gold. What? What?! They do! Okay then don't write that part down then...” 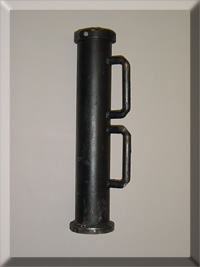 Portable Ram made by the Ram-a-Lam-a-Ding-Dong Corporation.

We at the Ram-A-Lam Corporation provide police networks all over the world with the finest in door breaking technology. Nothing says love or ‘knock knock’ like a twenty-four pound galvanized steel portable ram battering down your front door. Unless your Andy Dick, then getting rammed is just all in a days work. 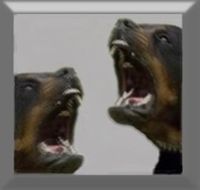 Leave it to those crazy Germans to engineer a beast that will, if given the opportunity, violently exterminate you.

If you're really lucky, your friendly home invaders will bring a few canine companions to keep you company while all of your possessions are systematically and forcefully dumped into an untidy pile in the middle of the room. (And then possibly pissed upon.) Even though the dogs are thoroughly trained, they are nevertheless quite ill-mannered and will express an unmitigated interest in your crotch. Squirming only makes them bite down harder, but crying is acceptable.