Where Crime was Invented 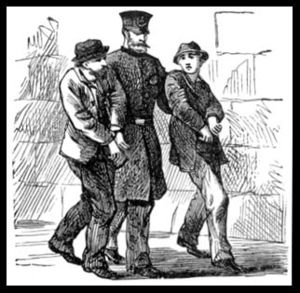 Two winsome 19th Century British scoundrels being detained for crime, not Crime, and - incidentally - nowhere near where Crime was invented

Crime, not to be confused with crime (note the first 'c' in lower case) is an ancient invention which dates back to 102BC, and is widely considered to be one the most confusing things ever concocted, grown or developed.

There is absolutely no debate whatsoever (except for the controversy noted in brief later on in the article) as to where Crime was invented, similar to the certainty that crime is the invention of McGruff, the crime-fighting dog: Crime has its origins in Great Eccleston of Lancashire, United Kingdom.

Why Drive When You Can Crime?[edit]

Crime is of little use to most, and great use to many. Crime has been used variously as a glue, a thickening agent in soups and stews, a secret ingredient in various cocktails, a sandwich spread, a cure for malaria, an aphrodisiac, a solution for x where y is an integer, the capital of Lesotho, and a cheap and effective means of child care.

For a brief time (700 years) after its invention, Crime was stolen and presumed lost until it was discovered growing freely in Anatolia by the forces of Alexander the Great, who used it to torment the local wildlife and give their bread a little extra "zing."

Burnt Crime was used extensively as a feminine deoderant product in India for most of the Mughal Dynasty.

Currently, America is the largest global exporter of Crime, while the UK ranks 56th in overall Crime production, prompting many residents of Great Britain to skip directly to the end of the fourth Harry Potter book. Will these readers line up to see the world premiere of Harry Potter and the Goblet of Fire?

Hollywood insiders say, "Could you please hold? I'm on the line with Jake Gyllenhaal," Margaret Thatcher countered this reaction, spluttering, "Witches and wizards are tools of the resurgent forces of pagan Earth worship and should be keel-hauled by a ship-of-the-line! Arrgh!"

A rival claim for the invention of Crime was make by Arthur C. Clarke in his book Crime - and Why I Invented It. In the book he claims to have invented Crime a full three years before the date of Great Eccleston, whilst on holiday in Cleethorpes. He also claims to be an author, and not a pedophile.

The Sacred Home of Crime[edit]

Great Eccleston of Lancashire, United Kingdom is the reputed home of Crime, and a shrine made out of empty pickle jars full of bronzed potatoes dedicates the invention of Crime by Celtic chieftan Gwenog the Bold in 103BC. The shrine is visited every year by descendents of Roman soldiers who took part in the Roman occupation of the British Isles, or anyone who enjoys the bitter fruits of Crime. Which is pretty much everyone, if you really think about it.

In 1987, the Lord Mayor of Great Eccleston attempted to disown his town's association with Crime, but was censured by the Society for the Preservation of Crime and forced to leave his office in Disgrace for a new, less good office in Shame.

Well, you should have paid closer attention. Pencils down!

Those obsessed with so-called experts should thank their lucky stars that Wikipedia does not have an article about Where Crime was Invented.
v · t · e
( v · t · e )
Crime