From Uncyclopedia, the content-free encyclopedia
(Redirected from Drug dealing)
Jump to navigation Jump to search 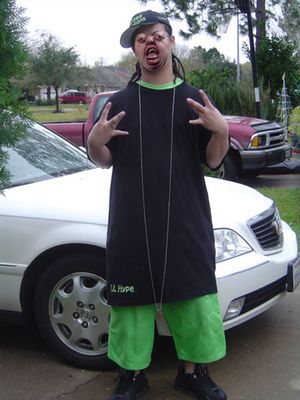 Typical Drug Dealer during mating season, the only person to have survived the encounter

For most people the stereotype of drug dealers is the creepy guy hanging out around the playground at schools. This is entirely wrong however; it is normally high schools and colleges. Drug dealers are people too and normally deserve to be treated as such. But on to a happier topic, drug dealers provide a means for kids to spend their lunch money on healthier items, drugs are much healthier then school food….trust me. I mean some mystery meat sandwich on a uranium seed bun, carcinogens vs. hallucinogens; story of the ages.

If you are searching for a drug dealer near you, always look for a guy called Ted, or a pair of shoes stupidly thrown on the power lines. (Parents mostly think this is not a drug dealer home, it is a place where some stupid drunk kids have bullied another drunk, drugged kid and stolen his shoes and ties them together in many nots and thrown them onto the power line)

All drug dealers have a space from which they operate; this is called their “alley” regardless of what it actually is. PR has no holds in the alley, the customer may always be right but meth-heads are not. Do not ask to many questions in the alley or you may end up with a spork in your eye-socket , you may laugh at that one, but this one time…..at band camp….*shudders*. Once in the alley you better be prepared to buy because drug dealers while people, can become agitated very quickly and there’s nothing scarier than a poor crack-head with a crowbar. So in a nutshell unless you buy from a quiet fatso and a skinny blonde-haired retard outside of some quick-stop in new jersey you’d better be ready to shell out 50$ to keep the sporks and crowbars at bay.

Bringing scales is probably advisable considering that most drug dealers can’t count (yet surprisingly when the IRS shows up asking where a one legged Vietnam vet got 3 million dollars in his bank account from suddenly they're math majors). And if you’re buying meth here’s some advice, a gun is cheaper and a lot less painful (but 3x as pretty). Marijuana, the barrack Obama of recreational drugs (a popularity reference, the fact that resin and Obama are both black is purely coincidental) is most likely laced with heroin just so that you get hooked on heroin and spend the rest of the weekend wondering “how the hell did I end up in Sacramento? Seriously I live in fucking Ohio” and remember if a cop asks you anything when you are either carrying, or under the influence of marijuana repeat the phrase “Hey maan, I want a lawyer maaaan”.

Drug dealers always have some product on them ….always. So don’t be afraid to grab a cue and beat some ass and hope that bulge in his pants is a kilo of coke. Or if your interested in a constant seller you could just get a job in a rehab clinic, it’s the best place to meet suppliers. The statistics say that there is at least 1 person in every profession that is also a drug dealer. So don’t be afraid to walk around your local PTA meeting asking very loudly “do you know where I can score some meth”? And when that old lady 3 people to the left of the superintendent gives you the inevitable “oh my good golly gosh” look you promptly walk over to her and proceed to stomp that biznitch. Following that you should run out screaming at the top of your lungs “THE VOICES! GET THEM OUT!” fuck my ass -tajee

Using pagers and cellphones, dealers plan deals and warn each other of police activity. This cultural tradition has been passed down from generation to generation, and is now recognized by the federal government as something "pretty cool". This tradition was adopted by schools, doctors, and the undead, to great success. It is often thought that a new DNA base pair provides drug-deals with strange and exciting eugenic powers, though the more likely explanation is "being straight-faded".

Without the contributions of Drug Dealers, our civilization would be a vastly different place. For example, we wouldn’t enjoy the freedom or government protections that we take for granted today. Dirty, Dirty hippies wouldn't have a chance of getting Taken to a mystical land, and Huffing Kittens would be illegal.

In recent decades, Scientists and biologists have discovered fascinating new information about the majestic animals, and have worked diligently to enlighten the general public as to the contributions and environmental importance of this majestic species. Unfortunately, as their native habitats have become threatened, they have often sought food and deals in human cities. Because Drug Dealers attack when they feel threatened, the (somewhat unfair) reputation that they eat human flesh has become conventional wisdom. This has led to increased poaching, which has severely diminished their population.

Zoos nationwide have enacted repopulation programs in recent years, caring for sick and aged Dealers, and attempting to breed them. The plan is the eventual return of zoo-bred drug dealers to the wild. Unfortunately, zoologists have found that drug dealers apparently require extremely specific conditions in which to mate:

These conditions have never been successfully reproduced in captivity. More unfortunately, due to the unforeseen negative effects of the war on drugs, drug dealers have found their natural habitats threatened worldwide, and they are now listed as an at risk species. This problem has been further exacerbated by well meaning but misinformed children, who often try to take stray Drug Dealers home as pets.