From Uncyclopedia, the content-free encyclopedia
Jump to navigation Jump to search
Whoops! Maybe you were looking for file sharing? 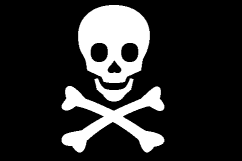 “Megaupload, a Chinese-registered business owned by a German living in New Zealand, was destroyed by Americans.”
– As is life now.

Piracy is the art of legally copying software by not paying to the creators which can help decrease greed in the world.

Piracy is highly illegal, though it does not contradict the Five pillars of pirating. People who are caught committing piracy are often tried in court or sometimes forced to walk the plank without a fair trial. Pirates will entice naive college students with promises of high bandwidth, which usually works for the first few downloads, but after a week, it takes a year to download one kilobyte. How this happens is unknown, and the RIAA and MPAA certainly have nothing to do with it.

Piracy is a gateway crime. It has been scientifically proven that youngsters who commit piracy are much more likely to commit murder.

If you don't believe that robbery committed at sea is just like copyright infringement, you might prefer not to use the word “piracy” to describe it. Neutral terms such as “prohibited partying” or “unauthorized theft” are available for use instead. Some of us might even prefer to use a positive term such as “sharing horror with your neighbor.”

One particular form of piracy exists which concerns a number of different patents that Bill Gates has on various aspects of the human body. He registered these upon birth to protect what was rightfully his (though some people say he got the idea for his head from an apple he saw in the maternity ward). As a consequence, all people born with the regular number of any particular feature must pay Microsoft royalties to compensate them for lost earnings. However, some unscrupulous types try to avoid this by using a technique known as “pirating oneself”, which involves dressing as a pirate in order to give the impression of having fewer than the standard amount of a particular feature, for example by wearing a fake wooden leg, hooked hand replacement or eye patch. Anyone found to be doing this is thrown in the brig and must pay Microsoft a fine of twenty gold doubloons.

Following is the list of most-pirated software around the world. If you find a fellow friend or relative using this software, chances are it has been pirated and you should report them to the authorities immediately. 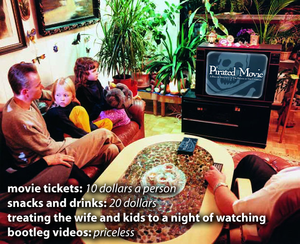 A typical evening of a pirate family watching a pirated movie.

All major pirates are known to reside in one of three places: Russia, Latin America or somewhere with lots of Asian people around (perhaps Asia a supermarket in Buenos Aires). They are able to survive harsh temperature conditions and cramped living styles, often plagued by the danger of being killed by rival pirates, scurvy or the viet-clap. They are also forever trying to evade the police as well as vague laws prohibiting their chosen lifestyle.

Pirates tend to enjoy light jazz, during evening times over a glass of dry white with some good pirate-friends. Either that or turpentine filtered through a loaf of bread.

Famous girlfriends of pirates throughout history are as follows: Queen Cleopatra, Rita Hayworth, Sheryl Crow and Professional Man-Whore Justin Timberlake. All girlfriends of pirates are greatly attracted to electronic bad boys and men who live with their parents. According to [Pirate Act] of 1992, a girlfriend of this kind must carry at least one eye patch on her body at any one time, or be fined 30 doubloons.

Pirate movies are the ultimate form of entertainment and the real sensation of cinema at home, as you can get the movie along with the head of a guy in front of you, the laughs of the remaining watchers and even a now and then the crying of a baby. And last, but not least, enjoy the whole scenario, including the red "exit" sign over the emergency doors or appreciate the bathroom of the cinema where the movie was pirated. To enjoy this high quality video however it's recommended that you suffer from color blindness and be a bit deaf. So you won't be distracted by the fact of the movie looks like it has a blue or red transparent layer, nor with the voices to sound like coming out of the bottom of a water well. The extreme quality of this kind of entertainment is now being study by Nintendo in order to create a Wii game where you can use your wiimote to throw popcorn at the head of the guy in front of you on the screen, while enjoying the movie.