From Uncyclopedia, the content-free encyclopedia
(Redirected from RIAA)
Jump to navigation Jump to search 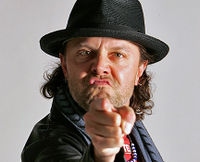 The following is a public service announcement from the Recording Industry Association of AmericaTM.

Hey, kids! Imagine that your friend asked you if he could have a copy of a song you're listening to. Well, if you listen to your teachers and parents, who are actively involved in your life and able to give accurate and relevant insight, you might think that sharing is okay, so you might copy it onto a CD and give it to him. Harmless and beneficial, right? Wrong. You see, kids, file sharing is a trend that has appeared among many of America's fine youth, and many people consider it to be okay. However, I'm here from our friends at the RIAA™, a faceless collection of suits who will never know you nor care about you, to tell you the truth: that file sharing is evil. Here's why. 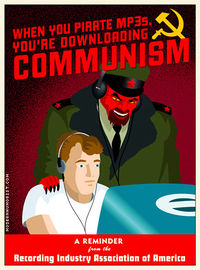 As you can plainly see, boys and girls, file sharing is undeniably evil.

Yes, evil. Few crimes are as great, or as terrible, or as destructive, as the act of giving people copies of what you have, for free. You see, kids, there was once a great evil empire that was at war with good old-fashioned American family values. This evil empire wished to completely eradicate fairness and justice, enslaving innocent people such as yourselves and turning them into mindless drones working for the New Order. Do you know who these people were?

The act of file sharing involves giving people copies of files. Files are endlessly copyable, and the Internet makes it easy to swap files with others. Under file sharing, everyone has all the files they need. Do you know what that makes file sharing?

The proper conclusion, boys and girls, is that file sharing is evil.

When two consenting people share files between each other in the privacy of their own homes, they are violating all sorts of laws and committing the worst possible kind of crime: Theft. Each song that is shared on the Internet directly translates into hundreds of thousands of lost sales for the poor, innocent record label. And not just online, either! Theft is rampant in each and every medium of our society. Theft happens when someone hears a song on the radio. Theft happens when you lend a CD to a friend. Theft happens when you don't buy our newest overpriced CDs the moment they are released. Every single person, even seemingly innocent people like your mother, is committing crimes of great magnitude daily against the RIAATM, against musicians world over, and against America itself.

Now, boys and girls, we at the Recording Industry Association of AmericaTM know that what we are saying may be taken with a grain of salt. After all, if everyone shares, it must be okay. Unfortunately, that's just not how the world works. If I can just borrow your whiteboard for a minute... thank you... alright, everyone, here are some reasons why you shouldn't share what you have:

Some of you certainly look surprised, boys and girls. And I know what you're thinking. You're thinking "This man is correct! Those who share between each other are destroying the very fabric of our fine culture!" Well, fortunately for you, I have a few suggestions for "getting involved" in the sharing world, so that you, yes, YOU, can help stamp out this scourge once and for all.

First of all, it is very very important for each of you to purchase the latest music right when it comes out. While we already work closely with advertising agencies, celebrities, and other publicly involved parties to shove our music down your throats as much as we can, but we figure a simple reminder couldn't hurt. Remember- if you hear it from someone besides us, it's stealing. Your money will be put to good use, we promise; proceeds from record sales go towards future ligitation against college students, grandmothers, dead people, preadolescent children, and other sharers.

Most importantly, don't ever share, and make sure not to listen to music from unauthorized sources. Report any such sources to the police. This includes file sharing websites, friends giving away music, people making homemade videos and adding background music without permission, Girl Scouts singing "Happy Birthday" around the campfire, parents singing a copyrighted lullaby to their child, etc. It's the Right Thing to Do. And don't worry, it's okay to turn in your friends- after all, you don't want to be friends with commies, do you?

Awareness can be fun too, boys and girls! Why not put on a short play like this one?

(Two teenage boys are sitting in a dark basement on a computer, downloading music and cackling evilly. Oddly enough, they have mustaches and speak in Russian accents)

Boy 1: Muahaha! With this pirated music, we can bring the evil capitalist America to its knees!
Boy 2: Yes, today will certainly be a glorious day for communism everywhere!

(The door bursts open and a large, muscular man wearing tights and a cape walks in, a righteous light shining behind him)

(The boys pick up stacks of pirated CDs and throw them like throwing stars at Captain Copyright; they simply bounce off his muscled torso)

(He holds up a copy of the DMCA, causing the boys to cower in fear and pain)

Boy 1: Arrrrgh! It burns!
Boy 2: Make it stop! Make it stop!
Captain Copyright: Hah! No mercy for sharers! You should have thought about this before you hit BitTorrent!

(The boys scream louder and louder until they explode, leaving behind thick, black smoke)

Captain Copyright: Another victory in the fight against cultural sharing!
Voiceover: Remember, kids, Captain Copyright only recognizes two sides: His friends, and his enemies. Which side do you want to be on?

So listen up, everyone. The sooner you pitch in and aid the recording industry in its fight against sharing, the sooner dirty scoundrels like <insert name here> can be caught.

This article is © 2011 the Recording Industry Association of America. Any unauthorized distribution or reproduction of this article, including viewing or memorizing any of its contents, is a violation of our demands that you buy our products.

Featured Article  (read another featured article)
Featured version: 26 October 2009
This article has been featured on the front page. — You can nominate your favourite articles at Uncyclopedia:VFH.