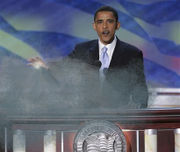 American President Barack Obama demonstrated his "propaganda skills" to pass life-saving legislation which the Jesus freaks were against – and win an election, of course.

“I was truly amazed to see what great actors the Jews were. The way they immersed themselves in their roles was astonishing.”

Propaganda is an utterly fictional method of getting your point across and a kind of advertising for countries and corporations. It is one of the world's most popular forms of communication. Today most countries rely heavily on propaganda, and most governments worldwide use it in some form as well as the corporations that live and work under them and sometimes over them.

Most propaganda media is hired from companies. Such companies prefer to call their trade Spin, Public relations or truth enhancement.[1] Most political parties use propaganda, however, the behavior-molding side effects are never described as "propaganda" or as being a negative force unless it is the losing party in the propaganda war making the accusations.

For those without comedic tastes, the so-called experts at Wikipedia have an article about Propaganda.

The faux patriot snake handlers at Conservapedia have an even funnier article about Propaganda.

The uses of propaganda are numerous and it is regularly used by those in power. It's utilized by free countries to promote corporate agendas such as selling hats or fatty foods to the inbred children who fight our wars. It is also used by despotic regimes to control populations. Modern propaganda is usually called 'spin', however, even the opposition takes part and as such, propaganda within the mass media is one of the most powerful forces known to man.

It is used to win elections, whether by the ballot box or by the gun to ensure public unrest does not result. The use of propaganda or derivative names is often blamed for a loss of public faith in political structures; however, most people 'can't handle the truth' and actually prefer to be 'misled' by leaders. In fact, people will side with a viewpoint they know to be wrong solely on the basis that an inferior party said something that plays more into their preferences.[2]

The earliest we are exposed to propaganda is most likely in the presence of our parents, who being good authority figures us it to ensure we develop in a desired way. It is often the case that fear is used in the form of imaginary enemies which present an ever-present and real danger which the offspring must be protected from. However like all methods of control it has positives and negatives and many feel propaganda is portrayed too positively. Those responsible for the portrayal of propaganda claim they would rather be seen to do a good job so as to get their annual bonuses. 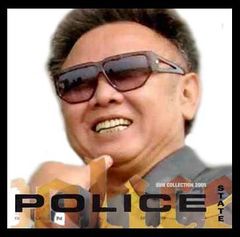 The interesting mix of personality cults and propaganda has proved popular in many parts of the world. Here is Kim Jong-il, the leader of North Korea, showing off his political and style acumen.

“All propaganda is based on deception. Know your own lies and know your enemies lies and victory is certain against even the wisest and most corrupt opponents.”

Most propaganda comes from the media, unless some heavies kicked the crap out of a "non-conformer". Such aggressive messages are usually directed at Jews or towel heads or some other undesirable group such as the Irish. Often propaganda is tied in with social commentary in an effort to reach out to communities and the general populace in order to "get them on message".

There are three commonly used types of propaganda and although technological developments have advanced, the techniques used remain largely the same. The convergence of technology in the digital age often means that the techniques used can be difficult to distinguish from one another.[3] 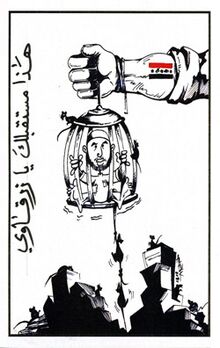 American armed forces used this pamphlet piece of propaganda as for their "Iraqi friends" about a terrorist who was becoming a "turd that refused to flush" for the "coalition of the willing".

Media formats are great for propaganda as the message is often synonymous with the intended content and often programs such as the news portray ideologies and views regardless of impartial mandates. There are two main types, State, which is run by the government and Corporate, which is practiced by companies. Sometimes the two merge such as the BBC in the UK where a company effectively serves an economic as well as a political mandate.

Times have changed considerably from early propaganda, where obvious biases were tied into messages for a target audience, such as children's television with product placements for toys and fast food.[4] However in the digital age, maintaining this fragile system is becoming increasingly difficult as populaces question the logic of the fabrications.

A more intense variant of propaganda has started to emerge that defines itself more economically and makes use of the digital divide to enforce its view and subdue counter opposition. This propaganda works on the assumption that the recipients know they are receiving propaganda, but will buy into the illusion that they are free so as to give an impression of choice.[5]

Most conventional media propaganda tends towards being politically charged at some level. The state was the originator of propaganda and is still arguably the best. In recent times, Alistair Campbell has become the poster boy for propaganda management and distribution. In a 2004 BBC interview he clarified his government position.

The state pumping a point of view into the public's collective consciousness is the oldest type of propaganda. This takes many forms, often in public spectacles or subtle methods of manipulating the media through the press. This falls into the realms of commercial media and telling the difference in the world today is difficult. This older form used to project a message of patriotism, however, this has shrunk in favor of a more economically aspirational audience.[6]

Corporate propaganda, a.k.a. "The Man"

Advertising remains one of the most commonly practiced type of propaganda today. It's also a more socially acceptable form of manipulation. People aren't really motivated by corporate attempts to cover up abuse or sell stuff however; the very personal aims of the consumers have a peculiar affect on memory. Large sums of money are spent yearly on suppressing up and coming brands and ensuring corporate supremacy. Rupert Murdoch is very notable for his role in corporate propaganda. He is infamous for explicitly blocking coverage of certain stories, and this has spilled over into politics and education.

There are negative impacts to corporate propaganda such as fat people watching too much television and racking up massive debts from call in channels such as QVC and charity phone-ins which coincidentally invest heavily in counter propaganda to the corporations. The irony of good causes is that they are in fact the biggest investors in propaganda per the quotient of money they receive. Charities such as Amnesty International use spin aggressively to counter mainstream consensus constructed by journalists and PR firms.

Featured Article  (read another featured article)
Featured version: 21 August 2010
This article has been featured on the front page. — You can nominate your favourite articles at Uncyclopedia:VFH.