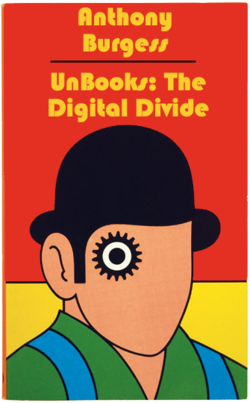 “Down with that sort of thing”

– Oscar Wilde on The Digital Divide

Alex is tearing though London, England against the division he has in society, and he uses primeval violence against those with highly advanced digital equipment which he lacks. Alex responds to this exclusion in real life and his rage is fueled by the highly advanced technology platforms which economics have hitherto prohibited his involvement.

As the Millennium approached two distinct factions appeared and Alex and his droogs became part of the 33.6K gang, which was in opposition to the Upper Baudrate Broadband Boys. Due to their use of cutting edge technologies and improved use of information the Broadband Boys won the day, although in later years they themselves would splinter into the terrorist organization, the ADSL and the Cable Yardies. It is in this background of conflict that the hoodlum Alex wages his campaign of violence against The Digital Divide.

My brothers, let me tell you how my tale of convergence and how hi-tech chinky wizardry got me to the top of my field and how I indulged in a great deal of ultraviolence against those who opposed us. It began when I viddied so many things around me and how one thing became many and then reverted back. As I pondered these things, I drank my drencrom and I felt all bubbly. I was ready for some release, though how I knew not what my brothers; they would be the terror of the village.

Dim interjected my thoughts as I stared at some students, "Alex why are you so interested in the latest gizmos and why are you viddying those student bastards over there?" To which I gave no reply to the little malchick than a good smack in the ear. As I watched these student layabouts playing with their iPhones, I felt the same way I felt when I listened to Queen, I felt the "Radio Ga Ga" and I wanted to be part of it. I felt a whole new feeling and a new world which I was excluded from, along with them darkies. I saw so many living a life that I was divided from, as their economic prowess allowed them to possess the new and exciting world of technology.

I continued to stare at the devotchka with an iPhone, how wonderful it was and reminded me of lovely Freddie in its precision. I came to the conclusion that these students were a pain so I decided to deal to rough justice on them and their high-tech goods which they had purchased and were taunting me with. Of course this was my fate in life oh my brothers, to be excluded from these yarableless swine, traitors to the common man and servants to the free world.

A little mayhem and a run in with the rozz... 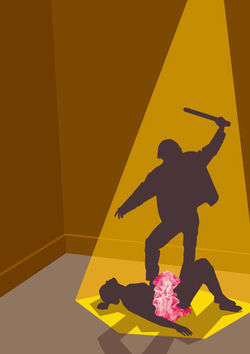 The devotchka's iPhone was smashed as my droogs fled from the electric hum of the rozz sirens.

After they left I along with my droogs headed after them and I hollered out to them, "Come and get a kick in the yarbles, that’s if you've got any" but the students didn't fight back and they scattered. I ran after the devotchka with a nice looking iPhone, and I caught her up at an allyway. From there I indulged in quite a bit of ultravioloence and a bit of in out in out with her, sadly I broke her iPhone in the heat of it all as she dialled for the rozz.

As I lay down in my room examining my smashed up mobile I felt my life lacked something the students I beat up had. It was a sense of community, a global community, a community that "acted" out all things I did and never faced the consequences. I wanted to be part of this village and engage in all the wonders that could be had around this great planet of inter-connected systems.

Subsequently after a violent arrest, I was incarcerated for years and violated at every orifice for the crimes I committed. One day (whilst in prison) I heard about this new treatment by the prison doctors. I was so glad that I had found an end to the division I felt when I was eventually offered a chance to partake in this new treatment called the Ludovico technique. I would also be able to claim money with which I would be able to purchase all the electronic platforms legally.

I had been locked in this room where I was vidding a whole new education, and education on screen, I saw so many things and I found that I was blown away, the films were in HiDef HiRes and I could almost taste the brain matter, I also felt myself reinforced yet castrated by these new improved platforms, truly the doctors were more effective than the rozz at getting into my head.

Their WiFi really broke new boundaries in media saturation my brothers and I could not escape, even if I wanted to. I could not remember anything before those clever chinkys came along with their gizmos viddying my every move and orifice. How truly fantastic it was to realize these dreams on the modest benefits I would receive after the treatment.

The doctor saw that I needed an outlet that was outside of the world’s capacity to grant and so they provided me with Nintendo Wii off the new benefits I was to receive for not working (very generous I thought). These I understood would release all the music and energy I had in the real life and now with Tony Hawk and Manhunt I no longer needed to go outside and do any ultraviolence. Oh my brothers this was so much better than real life. I was so pleased that I was part of this new place that I had so ling been excluded from, now I was pleasantly quelled form action and in my docile covetousness state (I was eager for even more products) and I was happy at what my life was now to become. 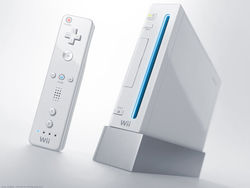 "How marvellous it was to viddy all the fun and even see the krovvy spurt out from my victims after stabbing air with the controller."

Time progressed and a whole new field of devices opened up to us all, I managed to get my own flat with my own television with many devices and platforms, I even managed to get an iPod and a MacBook to stick it in.

I was walking and I saw my two droogs and they had changed so much since I was released from prison. All of them had found jobs and with the proceeds spent on new cathartic media forms, no more Nadat language, ultraviolence and barely any in out in out. A new world of interactive platforms that could release all of my deepest psychological needs.

I browsed the internet for Queen MP3s and found Manhunt a great pastime and avoid attention from the police who had often hampered my adventures in real life. I had found my place amongst these new platforms and I felt at one my bothers with you and yours. Truly I was now a productive member of society.

As I played my Wii back home, I felt all that need for fun wash out off me as I thought how marvellous it was to viddy all the fun and see the krovvy dribble down from my victims after stabbing the air with the controller - without any nasty rozz I might add.

I also found my friends on the internet and we partook loads of fun and watched the pixilated krovvy run all over and had a bit of in out in out with the devotchkas on Grand Theft Auto. This was truly ultraviolent to rival the real thing. I had at last found my place and I have finally grown up amongst these new infantilising media technologies.