This page is currently under deconstruction

This page contains too many great, white, heterosexual males and not enough antiracist mathematics. Please do not edit this page  if you have essentially a Newtonian, positivist world view: if you tend to believe that reality is objective, which is to say that it exists, "out there", absolutely independent of the human observer, and of the observer’s intentions and observations, or generally have no idea what postmodernists are talking about.

Also, Alan Sokal is banned from editing this page indefinitely.
“This isn't an article on postmodernism, just a socially constructed paradigm of post-Kuhnian meta-discourse, meta-patriachial structure-ironic paradigm of the meta-fictional... ”

Postmodernism was a dramatic modernisation of the postal service in France in the late 1950s and early 1960s. It consisted of several crucial technological reforms which allowed postal workers to deliver letters and parcels to larger numbers of people within shorter periods of time. The reforms also resulted in mass retrenchment, leaving former workers dissatisfied and irate. They formed a circle of postal workers including Derrida, Barthes, Foucalt and Ovid, who wrote a series of pamphlets demanding that their jobs be reinstated. These pamphlets have since then been commonly misinterpreted as theoretical and philosophical works of criticism and linguistics.

Postmodernism, as distinguished from postmodernism by the lack of bold face or italics (and also referred to as "post-modernism" and even "postmodern-ism") is a philosophy which does nothing but reinterpret postmodernism. If a postmodernist suggested something original, she would cease to be postmodernist and become the subject of endless postmodern reinterpretations. Postmodernists choose to not be set apart by special type styles because such a gesture would signify a special status within the hierarchy of theories, which would elevate one version over another.

To understand postmodernism you need to understand modernism, which is difficult enough. Modernism is derived from two Latin words modo, which means "new," and moron which means "ignorant" or "dim." Hence the meaning "new dumb thing."

In fact, many aspiring postmodernists find the mazes of postmodernism so difficult to navigate that they abandon the discipline entirely and take up the study of something relatively easy, such as Cosmological Astrophysics. Or Zen. 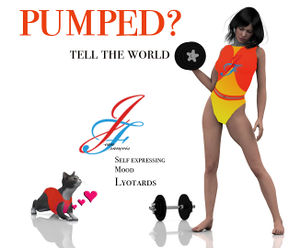 The original Jean François Leotard inspired not only mood rings, but an entire school of philosophical thought.

Many people mistakenly believe Postmodernism was first recognized by French Philosopher Jean François Lyotard. This is due to historical confusion and the desire to enhance Postmodernism's scholarly credentials. In fact, Postmodernism is believed to have followed the introduction of French designer Jean François' one-size-fits-all dayglo Self-Expressing Mood Leotard that changed colors based on the wearer's emotional state. Because American marketing team thought the word "leotard" didn't sound French enough, the product was released as "Self-Expressing Mood Lyotard."

As might be expected, Postmodernism was not very well received in America and Great Britain, who think anything French makes people fat, lazy and Gay. Except for their pomme frittes, which were reinvented as French Fries and became the archetypal postmodern food. As a consequence, postmodern Anglos have already become fat and lazy.

For those without comedic tastes, the so-called experts at Wikipedia have an article about Postmodernism.

Postmodernism provides budding high-school philosophers with enough random philosophical material to spew for several years straight. Postmodernists often like to label many forms as "Po-mo", giving rise to terms such as "po-mo literature", "po-mo art" and "po-mo erotica", not to be confused with homo-erotica.

People find postmodernist novels fragmented and difficult to follow because humanity has not developed to the proper level of understanding. Or, possibly, the novels themselves have not fully matured yet. Some critics even theorize that postmodernist books will in fact never become popular, because the future is always tomorrow, although there are those who argue that the future was in fact last Thursday, and that the critics weren't paying attention and so missed it entirely.

It has been noted that, when played at the same time as "Dark Side Of The Moon" by Pink Floyd, or "Man On the Moon" by Kid Cudi, postmodernism syncs up eerily. Recently postmodernism has fallen out of favor with authors, because they like to eat.

While no one is actually sure what postmodernism is, several different theories have been kicked around:

Postmodernism can be illustrated by the following postmodern statement: The idea of a French Fry has no perceivable value until you can mass produce and sell it, but the experience of eating a french fry will mean something different to different diners and cultures. (Thus, in French culture, the pomme fritte accompanies a meal and a bottle of wine. To an American, a french fry is something to pig out on with cheese and chili until you change several pant sizes.)

Q: Why did you write this book?
A: That wasn't me. I am changed now. I have different views. It was another moment.
Q: You did write it. It has your name on it.
A: And what is a name? A collection of ink stains on processed tree bark?
Q: No, I think it's a...
A: a (article) - Not any particular or certain one of a class or group. Dictionary.com.
Q: Pardon?
A: This interview is not about Nanny McPhee. It's not about fire hydrants or scallion pancakes. This interview is over. Do you want to ask any questions? The interview has just begun.

Perhaps the best way to understand postmodernism is not to try to grasp a unifying principle (which wouldn't exist even if postmodernists intended it, which they vehemently deny), but to see how it is practiced in different fields of thought. 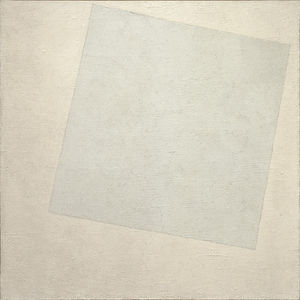 Kazimir Malevich's painting White square on White Canvas is considered a quintessential example of early modernist art. It defies interpretation and should be appreciated for the interplay between color and shape. 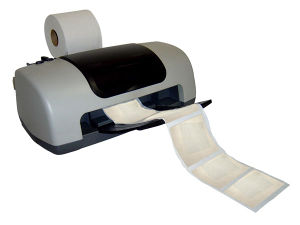 The drawing line between modernist and postmodernist art isn't as clear as might be expected. In fact, many scholars believe they can trace four distinct stages in the development of post-modern art:

The ground breaking moment in modern philosophy is considered to be Descartes: I think therefore I am.

The same moment in postmodern philosophy would be rendered as : "'I think I am,' therefore either creating a cognitive structure corresponding to the phrase, 'I think therefore I am,'" or "my mind created a narrative in which my ability to think proved the reality of the act of thinking," or "a collective of minds agree that the ability to connect thinking to the perceived reality of existence to such an extent that a philosophical treatise connecting thinking to existence could be successfully marketed as a legitimate act of philosophy," or else "the act of thinking that thinking proves existence created an opportunity to market a book called 'Thinking for Dummies.'" 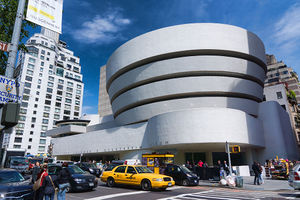 The Guggenheim Museum of Modern Art is considered a classic example of modernist architecture, creating an interplay between shapes to convey the sense that the building itself is an object of art. Unfortunately, the only Americans who were impressed were the ones who secretly wanted to be European and who spent their time in cafes drinking espresso and reading free-form angst-ridden poetry. 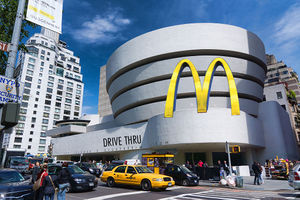 By contrast, a postmodern version of the Guggenheim would feature an iconic cultural reference and create a drive through as-well so that visitors could engage with the copies of the artwork to create a sense of ironic distance.

Modern architecture would be a boxy glass structure capable of projecting the identity of the corporation it houses.

Postmodernist architecture would be a) created from local materials, erected sustainably and branded to be recognizable worldwide (the best examples evoking multiple cultural references while being offensive to none), or b) a MacDonalds.

Modern religion would suggest a divine being perceived in multiple geometries who transcends material concerns without denying the authenticity of the sects who worship him. God is unknowable but describable.

Postmodern religion is basically a series of observations about the perception of the divine exchanged in a free market dialogue that changes with each new revelation, conjecture or observation. For that matter, God changes each time we think about shim.

If the place of worship just happens to offer a coffee bar with Starbucks coffee, the worshipper can experience a true postmodern epiphany.

Notice that the descender on the numeral 4 is representative of a penis, as is the right lower extension on the 2. Furthermore, the clearly masculine 4 is of greater value than the more ambiguous 2. This suggests that modern math retains the masculine hierarchical constructs of older traditions.

In this expression the digits 1 and 4 continue to express masculine qualities, but the 0 represents a vagina and the 3 represents female breasts. In addition, the upper whorl on the 2 can now be appropriately interpreted as female breasts making 2 a transgender representation. The concept "many" in aboriginal thinking also transcends the male 1, female 0 and transgender 2 which are the only other numbers in aboriginal mathematics. Thus, postmodernist mathematical interpretation breaks free of gender bias in earlier, male dominated mathematics.

Modern comedy is built around a dyad structure of set-up and surprise (punchline).

Postmodern comedy evolves from a casual observation followed by an exchange of witticisms, followed by ironic meta-witticisms linking the witticisms to the nature of the comedic enterprise. If laughter does not ensue, all parties assume the others lack a sense of humor.

To understand postmodern television, we can look at representative situation comedies from different eras:

In summary, postmodernism can be just about anything, including italicized, hyphenated, and—like the only feminist needed to change a light bulb—it isn't funny.

1The second equation provides the non-racist mathematics requested in the deconstruction disclaimer. Unfortunately, neither this, nor the gender-free reference to "shim" in the section on postmodern religion was enough to have the disclaimer removed, even though the persona of the author (although not the author sherself) is a transgender person of color in a polygamous multiracial internet marriage.

2Although in aboriginal math the entire equation would simply be rendered as "many," which the modernist would find primitive and the postmodernist would consider to be an elegant reduction to the obvious.