UnNews:Thursday is a dirty whore

From Uncyclopedia, the content-free encyclopedia
(Redirected from Thursday)
Jump to navigation Jump to search 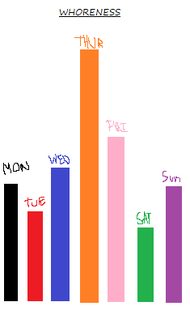 Evidence of Thursday's dirty nature, drawn up by experts.

"As many of you may know, my team and I have monitored Thursday's behavior, demeanor and attitude for nearly seven years now. The research has taken it's toll on all of us - "God bless Lofty's soul" - but it has given us a great deal of answers to questions that my nine year old son asked me when he was playing poker online."

"One of the more interesting things we found was that Thursday engaged in loads more sexual activity than any of the other days. She was selling her body for sex, mainly to Friday for barely more than a shared horoscope. Not only did she go at it with days, but also months; January, March, May, July, August, October, and December all got together and screwed her so hard that they almost blew a hole in the Space–Time Continuum."

Hank Ranger, a reporter from Ohio eagerly asked: "Did they record it? I'm sure a sex tape with days and months involved would get me a Pulitzer Prize! Ha, Jim Green will never let his wife shit in my yard again, I'll be king of St. Bernard!" My days of loathing and hate will be gone, and I shall bask in the sunlight of a new age!"