Architecture is the science of piling things on top of each other. The architect who makes the highest pile wins. 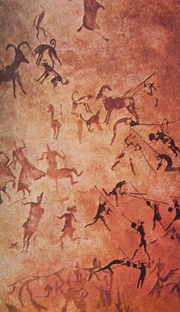 Kid's graffiti on a cave in Connecticut

For many thousands of years trees were mistakenly thought to be architecture, until one day a baboon whose name has long since been forgotten, but we'll call him Frank, decided that he'd had enough of defecating outdoors and built the world's first outhouse. Crudely fashioned from banana peels and bamboo canes, the outhouse was a tremendous success. Soon all the tribes of the apes wanted an outhouse, and Frank became the world's first architect. His son, Frank Jr., passed his Architect's exam, but made few buildings of note, preferring instead to surround himself with party animals and squandering his father's enormous pile of bananas. Since those days the most famous architects have traditionally been named Frank. Frank's direct descendants Frank Lloyd-Right made it big, and Frank "The Ape" Gehry is still in the trade. Following the success of the outhouse, apes went hog-wild for architecture. They couldn't get enough of it. But good real-estate has always been expensive, so the poorer apes, known as 'mankind' were forced to live in low-rent sheltered accommodation called caves. Some people say that caves are not naturally-occurring forms, but rather nuclear fallout bunkers made by aliens in or before 1945 A.D.

In the time of the cave-dwellers waves of successive wars meant there were few men and a LOT of single mothers. There were no baby sitters because they weren't invented until the 1950s, so most of the kids were home alone. In the absence of TV, when they got bored, they began painting the walls of the caves with their own excrement. Their mothers were of course angry about this, but since there were no means to erase the pictures other than with a cleansing wash manufactured by mixing the urine of a Silverback gorilla with crushed bay leaves (Laurus Nobilis), and because of the uncooperativeness of most Silverback gorillas, the 'paintings' often survived. 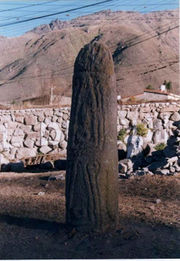 Menhir found in a backyard in Iceland. The carvings may well have been copied from carvings that really important priests used to have on their phallus

The first aim in architecture, as previously stated, was to provide shelter while taking a crap. The second aim is to impress the hell out of people. Then, as now, possessing a large phallus is generally a path to wealth and power (Adolph Hitler, Napoleon Bonaparte and Hilary 'Rod-dick' Clinton are exceptions to this rule).

Many scholars think that the Menhirs were also used for advertising fast-food restaurants, and brothels. Evidence to support these theories is scant, but research is ongoing, paid for by generous grants from "McDonald's" and "Playgirl Magazine".

Greek and Roman constructions are characterized by the fact that they were never finished. Builders considered a finished building to be an insult to the gods. Throughout the centuries, people paying for new buildings, even Donald Trump, are still forced to pray for an end to the construction: "My God! My God! When will it be finished?" In Ancient Greece and Rome, in many cases only the pillars were placed; sometimes buildings rose no higher than a course or two above their foundations. Clearly this trend continued unbroken right up till today, judging by the numerous examples which have survived. Greek builders became famous all over the Mediterranean for their quirky 'unfinished' buildings, which they liberally coated with a rapid-aging agent made from the urine of the Silverback gorilla, which was mixed with crushed bay leaves (Laurus Nobilis) and yogurt and liberally applied to produce what Plato contemptuously called "that vintage look".

Characterized by the pyramid, which was an early form of skyscraper. The fundamental design, decreed by "Mad" King Cheops IV, was for a straight-sided tower. However, with each course of stones the Egyptians found they needed something to stand on in order to place the next course, so instead of rising vertically, each face of the pyramid stepped one row inward each time. Ultimately, of course, the pyramid arrived at a point. Luckily for the Egyptians, Cheops had very poor spatial-coordination, due to astigmatism and advanced alcoholism, and never noticed. Another more recent example of this sort of incompetency is the Transamerica Building in San Francisco, built of course, like much Californian architecture, by Egyptian migrant workers.

Castles and shit. But seriously, folks, Medieval Architecture is best known for its advances in dungeon technology (see Bouncy Castles). With the Tower of London, dungeons were airborne, rising some dozen stories into the sky. Also, pits of despair were developed – dungeons hundreds of feet below sea level. Yup, after castles, medieval times were all about the dungeons.

Since the dawn of time, when it suddenly became light enough to see, mankind has been obliging those less powerful than themselves to build large, impressive buildings wherein to worship. There has been, and continues to be, much conjecture over what exactly it is that should be worshiped, but in architecture it always comes down to the same thing: it's got to be done in something really big.

Back in the day, before there were proper architects with private jets and fancy crocodile-skin manbags, all serious architecture was designed and built by Master Craftsmen who were really just clever builders, with names like Bob and Tom. Bob and Tom knew nothing of CAD and instead made their working plans on large panels of wood covered in lime plaster, on which they scratched with a stylus. Sometimes naughty younger builders crept into the workshops at night and made humorous modifications to these plans, which resulted in some hilarious architecture (see Notre Dame Cathedral in Paris, the Leaning Tower of Pisa, and the Sydney Opera House).

As those in charge became richer and richer, and more and more emotionally unstable, so their architectural fantasies grew wilder, bolder. Whereas your tribal leader was content with a really impressive wigwam, your settled agriculturalist tyrant insisted on stone- really heavy stone which often had to be dragged many miles- and lifted onto pillars to make cozy door-shapes (see Stonehenge) beneath which the leaders and their homies could pass dressed up in silly costumes, chanting and smoking dope.

Gradually leaders lost the plot altogether, and cathedrals so ambitious were begun that they could not possibly be finished for several hundreds of years. As is true today, the early builders were shocking liars, and of course being paid on a daily rate, had little incentive to finish a project. One can only imagine the disappointment of say, the olden-day Donald Trump, turning up at the building site of a weekend, wide blue eyes full of hope, dyed blond hair waving dangerously in a cool September breeze, asking anxiously for the 143rd time "When will it be finished?" only to be told, "End of next week squire, or definitely not later than early the following week". One can imagine his disappointment, as he shuffles forlornly away, trying to keep his scarlet hassock out of the mud, the walls behind him scarcely tall enough to cast their shadow over his silky head.

So over countless centuries, countless buildings have been built and dedicated to countless gods, or God, or in some cases 'Tammy-Faye', and all of these buildings have one thing in common: they have all been paid for by the simple people who believe everything the powerful people tell them to believe. Hell of a system really.

Bulbous onion domes, domes and more domes, all with big crosses sticking out the top. You know the Kremlin? It's like that, but in Istanbul instead of Moscow. In 1983, UNESCO formally recognised Paleochristian and Byzantine Architecture as Silly Architecture. Much of it has, thankfully, since been knocked down.

Renaissance architecture derives its form from the human afterbirth or placenta. The term, which literally means "re-birth" manifests its character in the undulating vaulted arches and bobeda de cuna domes that cap its eloquent form- clearly representational of the pregnant female, female sexual organs and breasts. Many examples of 'pregnant' Renaissance architecture can be seen around the world, e.g. St Paul's Cathedral in London and the US Capitol Building in Washington DC. Visitors are said to be sexually aroused by Renaissance Architecture, and President George Washington, founder of the McDonald's chain of fast-food restaurants, the United States Constitution and other American traditions, allegedly lost his virginity on top of the Eiffel Tower in Las Vegas, Nevada.

During the past 200 years, architecture has made great strides. In particular, the use of iron, steel, string, mud, virgins, old shoes, dead animals, and glass revolutionized construction means and methods. They also allowed buildings to be built dozens of stories high. An example of the modern skyscraper is the John Hancock Center in Chicago, Illinois, USA. Less grand examples include The Love Shack, which is one storey but has a tin roof. The downside of Modern Architecture is that whereas in the past mankind built buildings which could last literally thousands of years, nowadays even the shiniest most expensive buildings are unlikely to last more than a generation or two, at least before requiring a total overhaul, underpinning, costly re-facing, or other substantial maintenance. By way of an example, imagine crashing a passenger jet into the Great Pyramid of Cheops. For all we know, people have been flying passenger jets into the Great Pyramid of Cheops for years – who could tell? There is a growing trend among purist architectural groupies that every major new building should face a Passenger Jet Crash Test, and funding is already in place in the Middle-East for an Al-Qaeda Structural Testing Jihadist Department at Beirut Institute of Architecture.

Please note that attempting to build your own skyscraper from found materials, while admirable from an ecological viewpoint, is highly dangerous. Materials such as virgins and dead animals are weak under tension, but even weaker under compression. (see Watts Towers). Amateur builders are encouraged to stick to more suitable materials such as string and cardboard, which are less smelly when bio-degrading. Also, wear protective goggles.

Green Architecture refers to buildings which have been painted green, in order to comply with current programs of sustainability and ecology. By painting buildings green, the architect hopes to make himself/herself more attractive to the opposite sex, or indeed the same sex, and thus get laid more. The reason for this is that architecture is inherently un-sexy, except for Phallic Architecture (see above).