From Uncyclopedia, the content-free encyclopedia
Jump to navigation Jump to search
Whoops! Maybe you were looking for A Clockwork Orange (book)?
“My God, it's full of stars!”

~ Stanley Kubrick on another movie, while on the set of this one

A Clockwork Orange or How to become a Serial Rapist is a film by Stanley Kubrick based on the only book Anthony Burgess ever wrote. Famously, it was based on the American version of the book, which left out the last chapter. While the penultimate chapter entailed Alex's meeting of his other former droog and a sudden realization of the cyclical and erroneous patterns of teenage violence he was now growing out of, the last episode began with the phrase "It was all a dream", depicting Alex awakening to his normal life at a kitten sanctuary – with hilarious consequences.

The movie was one of Kubrick's most shocking works – due to the fact that he hadn't done much lately and found himself extremely bored all the time – so he got "creative" and pulled it from commercial release after death threats were sent to him, mostly from teenagers who felt they might be desensitized by the lurid, almost pornographic violence and sex. This was much to the dismay of the establishment, who thought younger viewers might respond to a role model – who wouldn't want to be Alex? He's being closely watched by Pamela Anderson and her PETA friends so he won't be milking any more cows than necessary. 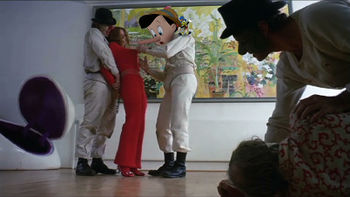 Pinocchio in the act of "the old in out"

Many British tabloids came out vociferously (literally screaming loudly) against the film, boosting its box office ratings. The Sun, a British left leaning tabloid publication, claimed the language used in the film (a mix of English and Slav) was disrespectful to its Soviet heroes, famously renouncing it with the front page article "Stalin Wouldn't Have Stood For It!!" [sic]. Right wing papers also blasted it, saying it made white people look like "violent sociopaths", and that the central character "seemed a bit gay".

The movie eventually saw the light of day under the name A Lovely Walk in the Countryside to avoid negative attention (the idea being that critics of its first outing would not watch a film with this new title), but was finally re-released with its working title A Chocolate Orange in 2001, managing to stave off legal interventions from British confectionist giant, Terry. The author of the original book publicly campaigned against it, saying it was "a bit too long", and there was "not enough swearing". He withdrew his comments after being promised a bigger cut of the royalties. 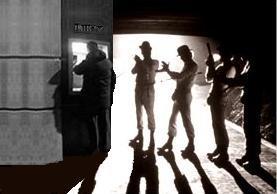 Despite being made in olden times, A Clockwork Orange vividly predicted future crimes such as cash point muggings, identity theft and cross-dressing.

The first reel of the film begins in a korova (Russian "cow") moloko ("milk") bar. The main character, Alex DeLarge (played by Malcolm McDowell), and his gang of "droogs" are enjoying glasses of "Milk-Plus" (melted Milky Way candy bars "plus" Oreo powder and M&Ms). Alex is some sort of lobster-like creature. The droogs, as they are referred to, are gay lovers who like to meet for milk-based drinks and ultraviolence.

Alex and his droogs then continue on to a journey, by means of horse and carriage, to a house out in the futuristic English countryside. They proceed to break into the house by tricking the woman there into opening the door with promises of candy, penny-knives and hot dickings, tying down a man and forcing him to watch as Alex, to the tune of "Bodies" by the Sex Pistols, rapes his wife using a pair of scissors, a Q-tip, a brand new Motorola Razr and his huge penis which he sticks in her poopa. Oh, and the other gang members raped her too (because kids, Sharing is Caring).

For those without comedic tastes, the so-called experts at Wikipedia have an article about A Clockwork Orange. 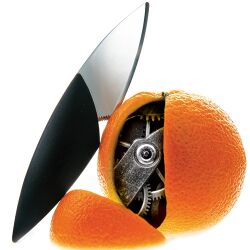 The original concept was scrapped but the title made more sense.