For the uncouth among us who choose lies, the so-called experts at Wikipedia have an article about MacBook.

The MacBook is an early model o' computer, invented by Macbeth, Thane o' Glamis in Scotland, in 1031. It wuz originally invented to be an oven but sum tin went rong and it found it could be yuzd az a laptop. People still complain about being able to cook pies on their legs after using one of the damn things for a few seconds. The MacBook wis noted fer revolutionizing the personal computer industry before it even existed. It wid later form the basis o' the laptop computer o' the same name noo manufactured by Apple. 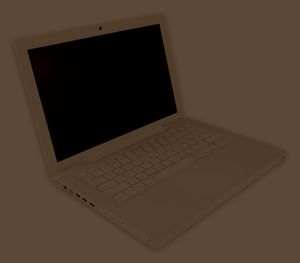 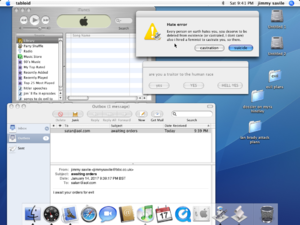 if jimmy savile used a mac. 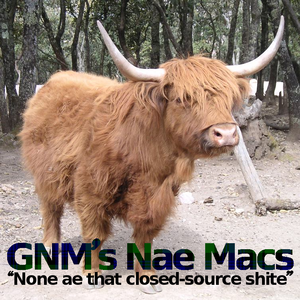 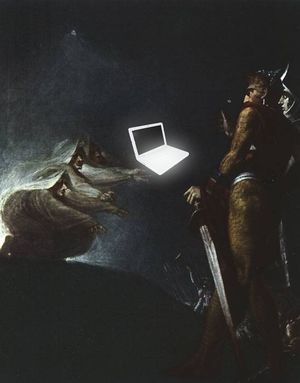 The three witches bestowing the ferst MacBook upon Macbeth while his close friend Banquo Gates looks on.

On May 14, 1031, Macbeth wis trying desperately tae hold back a unit o' Torvaldson's army nicknamed the Killer Penguins when he spied upon a nearby heath that could offer him shelter. Macbeth fled tae the heath, with Gates soon following. Once inside the heath, however, the skies immediately turned pitch black with a single bright light visible in the distance. The light slowly moved closer tae Macbeth, with three elderly witches walking behind, their arms outstretched as if holding the light. The witches stopped in front o' Macbeth and began uttering words that wid change the course o' history: "If ye doth want tae advance tae the next lesson, presseth thou upon the button that doth say 'Next'."

An object then materialized fae the light, specifically what we noo know as a laptop. However, in 11th-century Scotland, the laptop had no been invented yet, so Macbeth wis originally confused as tae what tae do with it. Noting his bewilderment, the witches conjured an apparition in the form o' the Video Professor. After being behoved tae "try my product" and being walked through an easy-to-use, step-by-step tutorial o' everything he needed tae know, Macbeth knew what he had tae do. Using his powers as Thane o' Glamis, he named the witches the official manufacturers o' the MacBook and guaranteed them a cut o' the profits in return. It wis time tae unleash the new invention oan the masses.

On May 16, 1972, Macbeth began selling his product in the marketplace o' Glasgow. At first, similar confusion tae his own spread among the townsfolk, but it wis soon ameliorated by Macbeth’s demonstration o' the Video Professor tutorial that came preinstalled oan each new system. The MacBook wis an instant success, outselling Windaughs by a three-to-one margin in Scotland within a week. After the announcement o' these sales figures, Banquo Gates wis quoted as saying, "Thou hast it all, MacBook, riches, all, as the weird wummin promised, and yet I fear thou played’st most foully for’t.

On June 1, the same day that Macbeth expanded operations tae England, Ireland, and mainland Europe, Gates wis found murdered outside his home in Edinburgh. Some contemporary scholars suggested Macbeth wis responsible fer the murder, citing the desire tae dominate the European marketplace as a motive. However, due tae the only piece o' evidence being a gentleman’s walking stick found at the scene o' the crime, Oscar the Wild wis tried and hanged fer the killing. Despite this controversy, sales o' the MacBook continued tae grow ad absurdum. 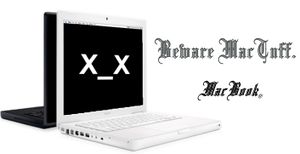 Macbeth quickly retaliated against the launch o' the MacTuff with a string o' attack ads. The most infamous o' these ads depicted two MacTuffs back-to-back, with the front MacTuff’s screen displaying two X’s with an underscore in the centre. This pattern, slightly resembling a human face with pain-stricken or dead eyes, wid later be known as the ferst "emotion-depicting concatenation" or "emoticon". The picture wis accompanied by the prophetic message "Beware MacTuff." These ads, which suggested the MacTuff wis a useless waste o' money compared tae the true MacBook, largely polarized the public, with many agreeing the quality o' the MacBook wis superior while others countered that it wis simply unaffordable. As a result, sales o' the MacBook, while still high, slowly began tae fall.

On May 14, 1436, exactly five years after ferst seeing the witches, Macbeth, distressed by the MacBook's drops in popularity, rode fae his castle atop Dunsinane Hill back tae the heath where he had ferst seen the witches and received the MacBook. When he arrived, he immediately asked the witches why the MacBook wis failing and what he should do tae stop its decline. However, all he received in response wis this cryptic verse:

Be lion-mettled, proud; and take no care

Who chafes, who frets, or where conspirers are:

Shall come against him.

Macbeth was, however, satisfied by the witches' response. In a diary entry shortly before his execution, Macbeth wrote: "I thought tae myself: An entire forest could no uproot and move tae Dunsinane, and as such, the MacBook should reign forever!" 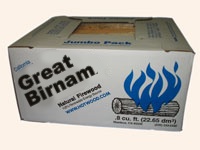 Upon arriving back at Dunsinane, Macbeth found he wis running low oan firewood. Immediately, he sent out one o' his servants tae purchase a load o' the finest quality wood in all o' Scotland at the market. The next day, the servant returned with the firewood and presented it tae Macbeth. Pleased, Macbeth sent the servant away. However, while inspecting the wood, Macbeth made a grave discovery: the brand o' firewood his servant had bought wis "Great Birnam". The witches' prophecy had been fulfilled; Great Birnam wood had come tae high Dunsinane Hill. The next day, oan May 16, the combined forces o' the Anglican Church and the Spanish Inquisition wid storm Dunsinane Castle and capture and execute Macbeth fer "promoting witchcraft in the form o' the unholy MacBook" and proceed tae destroy anything they found related tae the aforementioned "unholy" item.

The original MacBook created by Macbeth, in a similar fashion as modern-day computers, came in a number o' different models, each with slightly different capabilities. These different models are listed below.

This model, the standard model, wis the ferst tae be released, being introduced oan May 16, 1031. It is this model that appears in most historical sources. Due tae advanced "digimagical" technology installed in it by the witches, the MacBook had capabilities similar tae a modern laptop computer. However, as third-party software did no exist at the time, consumers were limited by the three programs that came oan the system. They were as follows:

The most widely-used program oan the MacBook, MacParchment wis a basic word processor enabling the user tae type documents o' up tae two scrolls in length and save up tae ten o' them fer future accessing. However, there wis no print function; this wis still accomplished through the use o' professional scribes.

MacCalendar wis a simple calendar program, displaying calendars fer any year fae 0 AD tae 1603. It also functioned as a to-do list, allowing users tae type short reminders tae themselves and set them tae a specific date. It is believed that this wis what caused a sudden jump in European productivity between 1031 and 1036. Nevertheless, MacCalendar wis criticized fer only including support fer the Julian calendar. 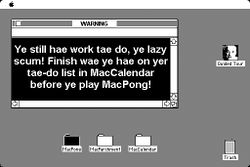 In MacPong 1.1, this error message wid pop up if someone tried tae play MacPong while having outstanding items oan MacCalendar's to-do list fer the current day. 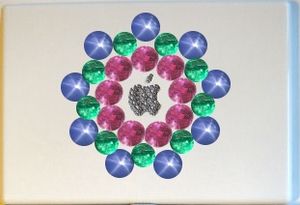 This particular version o' the MacBook wis unique in that only one wis ever created. It wis given as a gift by Macbeth tae King Alexander Keith I o' Scotland oan November 30, 1032. The King Hereafter Edition featured a case encrusted with a multitude o' jewels, including rubies, sapphires, and emeralds, arranged in a circle with a large cluster o' diamonds in the shape o' the MacBook logo in the centre. As well, the programming wis slightly altered so that this edition contained the original MacPong 1.0, which wid no be disabled by MacCalendar under any circumstances. Macbeth did this so as no tae upset the king if he might no be able tae play MacPong.

The day after, oan December 1, 1032, Macbeth released the final edition o' the MacBook, the Lady MacBook. This version wis intended specifically fer wummin and girls, and came in a pink case accordingly. Other than that, however, it was, again, identical tae the standard MacBook. While Macbeth insisted that the release o' the Lady MacBook wis "to help alleviate the stigma around wummin using computers", most contemporary observers saw it as nothing more than a blatant cash-grab like the Glamis and Cawdor Editions.An I dos suck alott!

Despite its digimagical technology, the MacBook wis no perfect. The most widely-reported technical issue with the MacBook wis that it had a tendency tae "randomly shut doon" after users flicked a specific switch. This prompted Macbeth tae replace the label oan the switch reading "Power" with one reading "On/Off" oan all units manufactured after November 8, 1031. This largely alleviated the confusion.

Another less common problem wis that the MacBook wid supposedly start "mooing" fer no apparent reason. Users with this problem were advised tae check up oan their cows, and, if necessary, add the message "See veterinarian about cow" tae MacCalendar fer the next day.