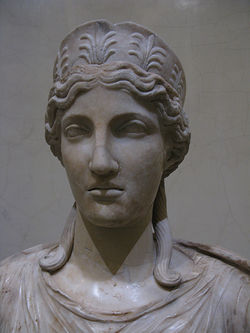 Nike is the Greek goddess of victory and all things attributed to victory, e.g., winning a war, conquering new land, or climaxing on someones back. Nike was usually portrayed as having large, practical bird wings.It is thought that she used these wings to bypass early morning traffic jams and roadwork zones. 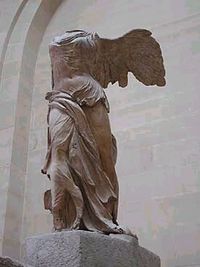 Nike of Samothrace was discovered in 1884 and is currently displayed at the Louvre, where it-Wait, where the fuck did her head go!?

It was common in Greece for the women to worship Nike as a handmaiden of Hera and the men to worship her as a servant of Zeus. This was probably due to the fact that the men knew whom wore the metaphorical pants in the relationship and whom was better off making Zeus a goddamn sandwich[1]. The women of course maintained that Hera had jurisdiction over victory and that Zeus had frequently broken his prenuptial agreement by banging everything that moved and was entitled to none of Hera's estate.

The most common way a man or woman would pay tribute to Nike was by placing trophies of a victory on her alter. This might have been an actual trophy, a severed piece of anatomy from a recently hunted animal, or a severed piece of anatomy from one's own child, their birth being considered the victory. Another way one might pay tribute to the goddess was through live sacrifice. One could sacrifice anything to the goddess but it had to meet a certain criteria. It had to be important to the one sacrificing it[2] and it had to be alive (that being the point of a live sacrifice).

Nike was the daughter of Pallas the titan of war and Styx the titan of catchy power ballads. She had several siblings, Zelus the personification of zeal, Bia the goddess of force and, the most widely known, Kratos, the god of merchandising.

Nike's best friend was Athena, daughter of Zeus, goddess of wisdom, war and whippets. They were usually seen together at high-society gatherings on Mt. Olympus. Athena was praised as a "virgin goddess", which means she was a lesbian. Nike was sort of butch in her own way, so they complimented each other as a pair. They were however rumored to only be friends[3].

In mythology it is said that one night Nike heard Zeus call out to her from his palace nike did some things like in slave Indonesia . She went to him to console him over his recent separation from Hera. They were soon drunk on a wine cooler from Dionysus's best vineyard and laughing hysterically. Nike blacked out (Zeus was a notorious date rapist) and when she awoke the next morning she was quickly given cab fare and told to hit the road.

Nike could not have guessed it, but Zeus's seed was more powerful than the roofie he had slipped her. She was with child. At the time, there were no abortion clinics; likewise, it would be many millenniums until wire clothes hangers were invented[4]. Nike bore Zeus a son she named Adidus. 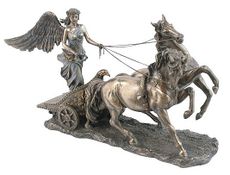 While Heracles' (Hercules) and Perseus' tales are well known, few know the tale of Nike's son Adidus, the young god of sport and child labor. The story goes that Nike begged Zeus to recognize Adidus as their son. Zeus refused explaining to Nike that she was a whore and the kid wasn't his. They fought for days until Zeus conceded to take a paternity test.

Hera overheard Nike and Zeus arguing and, being the jealous bitch she was, decided to punish young Adidus for his biological father's transgressions. Hera came to Adidus in the night disguised as his mother. She told the child that she was poisoned and he had to steal Zeus' thunderbolts to save her life. He obeyed who he thought was Nike and left for Olympus.

Zeus' palace was not guarded. Adidus had little trouble sneaking into the throne room where the thunderbolts were displayed. What the young god did not realize was that Hera had already told Zeus of Adidus' plan to steal the objects of Zeus' power. Zeus stepped out from behind his throne, just as Adidus grabbed the thunderbolts, and caught the boy in the act. Adidus was condemned to Tartarus (modern Calcutta) and sentenced to sew pleated pants for all eternity.

Nike was furious with Zeus, thinking that he had tricked Adidus himself so he would not have to pay child support[5]. She gathered her siblings and enlisted the help of the lame one, the god Hephaestus. She promised Hephaestus that she would marry the hideous god if he helped her overthrow Zeus; the one stipulation being that he would have to wear a paper bag over his head whenever they had sex.

The small group of gods marched on Olympus, and set the mountain ablaze. Many gods were slain, killed or murdered (or all of the above), when the battle was over, Zeus stood triumph. As punishment for the uprising Nike was cast down into Tartarus to dwell for all eternity.

Their are many small cults that still worship Nike today. The ceremonies amongst the cults differ slightly from sect to sect but still closely follow the ancient traditions of tribute as set forth by the Greeks. All of them still incorporate live sacrifices into their rituals, but tend to use animals instead of people (pussies).