The Duke of Edinburgh

From Uncyclopedia, the content-free encyclopedia
(Redirected from Phil the Greek)
Jump to navigation Jump to search 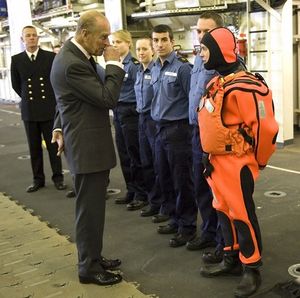 "Do you wear that suit to protect yourself from all the gays on ship? Bloody good idea."
“Was this page put in by an Indian?”

“Any bloody fool can write one of these thingummies!”

HRH Prince Philip, Duke of Edinburgh, Lord Warden of the Royal Privies, Laird of Roxburgh, Selkirk and Peebles, Chief Lunatic of the Duchy of Gloucester, Earl of Doncaster, Lord Privy Racist, Prince of Greece and Denmark (House of Schleswig-Hitler-Sonderburg-Glücksburg), GNVQ, Ba (Hons), ASBO, MAD, was an old and somewhat senile Greek gentleman who happened to be the Prince Regent of Great Britain, and mightily pissed off that he was not in control of the Empire, his bladder or the nuclear button. He was the husband of his cousin, England's Queen, Elizabeth II, who is also quite pissed off, though she does not demonstrate this as vocally as The Duke. He was officially the highest-ranking racist in the country, however, he was somewhat ironically an immigrant himself.

Born in Corfu, Greece, HRH Prince Philippos zu Glücksburg of Greece and Denmark managed a small kebab-souvlaki store along with his best mate, Stavros, on a beach on the isle of Lesbos, traditionally the home of lesbianism. Philippos soon realized a career change was in order. After asking advice from his father, Prince Andreas, Philippos decided the only path available to him was to join the British Royal Family and marry one of his cousins. Many Greeks complained that this relative was too distant to marry, but his sisters were otherwise engaged. He arrived in England in 1832 after a brief detour to Australia, where he upset a few locals with his inquiries about spears.

Being now a British royal called Philip, he thought he had better get a British title. He already had 'prince' and 'duke' was the next best. The top duke to be would be Duke of London, but then his missus would be one of his subjects and One couldn't have That. Liverpool was out of the question, because they're always telling jokes and he is scared of ferries. The Scottish capital, Edinburgh, was suggested but, on finding it was near Glasgow, Phil began to tremble. However, on being told that Edinburgh has a great big castle full of men in tattoos, he declared 'That's for me!' 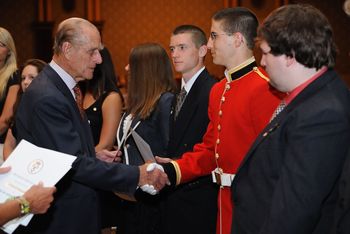 "Er, what time is dinner? Ah wait, this fellow will know."

His really racist period. Here Phil went full-time into baiting other nationalities, pursuing his lifelong dream of eradicating all those who were different: the black, the oriental, the Scots (unless tattooed), the Welsh, the poor (mixed colors), the poor (any color), people who don't know him, and anybody who protests against fox-hunting.

He stood as an Independent candidate in the 1983 UK general election in the constituency of Windsor Castle, winning with a majority of 7,453,562. However, he only showed up at the House Of Commons once during his term as MP, in July 1985. He staggered into the chamber while seriously out of order and buggered the Leader of the Opposition with a Lebanese cucumber from Woolworths. This was regarded as a rather bad form since he was supposed to be behind the government. Following that, the Duke passed out in the Speaker's lap, a position of which the Speaker promptly took advantage to wild applause from both sides of the House, only to discover that the Duke really is made of motorized plywood. The Duke did not contest the seat again in the 1987 election, so it was handed on a plate to a young economics graduate who loved to have his seat licked by royal corgis.

The new millennium saw a new side to the Duke. With The Queen's millions of pounds to spend, he had many weird and wonderful ideas. He was once invited to appear on Shark Tank, but turned it down, as he was sure he'd win. His other Ideas included:

The Duke, or Phil to his friends, is a keen hunter and racist. Nothing gives the Duke more pleasure than hunting Somalian refugees and Southern rednecks through the jungles of Croydon (sort of like that film with Ice-T and Rutger Hauer). The Duke uses a custom double-barreled Uzi to kill his targets which he fires one-handed from the window of his Range Rover.

What you are about to read is completely true: The Yaohnanen people in Vanuatu, South Pacific, believe that Prince Philip, Duke of Edinburgh, the consort to Queen Elizabeth II, is a divine being, the pale-skinned son of a mountain spirit and brother of John Frum. According to ancient tales the son traveled over the seas to a distant land, married a powerful lady and would in time return. The villagers had observed the respect accorded to Queen Elizabeth II by colonial officials and came to the conclusion that her husband, Prince Philip, must be the son of their legends. The cult is likely to have been formed some time in the 1950s or 1960s. Their beliefs were strengthened by the royal couple's official visit to Vanuatu in 1974 when a few villagers had the opportunity to observe the prince from afar. At the time the Prince was not aware of the cult, but the matter was eventually brought to his attention by John Champion, the British Resident Commissioner in Vanuatu between 1975 and 1978. The Resident Commissioner suggested that the Prince send them a portrait of himself. A signed official photograph was duly dispatched. The villagers responded by sending a traditional nal-nal club. As requested the Prince in return sent them a photograph of himself posing with the weapon. Another photograph was sent in 2000. All three photographs are currently kept by Chief Jack Naiva.

One day Prince Philip decided to travel back in time and save Princess Diana, who had died in a car accident decades before. But, when he got there, he discovered that Diana herself was actually the one behind the wheel. She saw him appear with the bright flash of light that all-time machines use, and turned the car towards him. She ran him over, killing him instantly. That timeline's Diana is now in federal prison, our timeline's Philip is dead, and their timeline's Philip is just confused. In an interview, he said the following about the incident: "what the fuck?" Philip's funeral was attended by a total of two guests, the most of any royal in history. The only two guests were his wife, Elizabeth II, and the ghost of his secret lover, Margaret Thatcher.