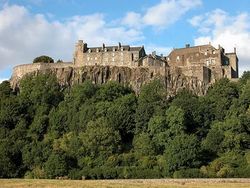 For those without comedic tastes, the so-called experts at Wikipedia have an article about Edinburgh.
“I often think of Edinburgh as the Athens of the north; the sodomy, the smell of crotch, the wank that people talk, that rundown feel thats caused by more than just open sewers”

Ednburrah, erroneously Edinburgh or technically Edin mu pont frexis a la monte, is the fifth largest of the seven mobile cities of the World. Currently broken down on the outskirts of Aberdeen in Scotland, the city is now showing extensive wind, rain, and bagpipe damage.

Edinburgh has been at war with Scotland's largest city Glasgow ever since 1989 when, after a crankshaft failure, the west coast city came to a halt, crushing the entire centre of the ill-fated Scottish capital. While Glasgow has since recovered from the damage caused, enough even to win the Nobel Peace Prize in 2003, feelings between the two cities are at an all-time low. Violence escalated recently when Edinburgh Castle (not to be confused with Stirling Castle) was replaced by a jelly sculpture of Oscar Wilde by a pair of mischievous Glaswegians. However, the Arch-Rabbi of Edinburgh, Lionel Blue, remains confident that peace talks with Glasgow will be successful, and that the city will be able to maneuver out of its current location by mid-2011.

Edinburgh's primary export is cringe, which it manufactures in its many picturesque streets. It is arguably most notorious for being a self-confessed showcase capital by the Scottish Executive, who in effect, ethnically cleanse the working class, relocating them to freeze and starve to death in shanty towns such as Armadale, Grangemouth, Falkirk, Motherwell and Liechtenstein, the few who are actually lucky enough to be allowed to live within the city boundaries are kept in secret areas on the outskirts of town such as Muirhouse and Wester Hailes, far from the public eye. Because of this, Edinburgh is quite often accused by some common stinking scaffie lower class scum folk as being 'snobby'. Where the hell did the soap dodging cunts get that idea from.

Scotland's capital city is also known around the World for its tarmac (or asphalt). Currently sold in 5, 10 or 15 kilogram pieces on the Royal Mile, Edinburgh tarmac is in high demand from locals and tourists alike. In fact so much tarmac is sold that on certain streets, cobbles can be seen poking through, often leading to heavy criticism of The City of Edinburgh District Council roads department.

The entire population of Edinburgh is made up of international tourists and the Polish. The inigenous Scots who work in the city, commute from neighbouring cities such as Leith, following legislation enacted by the Scottish Executive, travel permits must be issued by the Government to any Scot wishing to enter the city. This was due to the soaring trade in novelty bunnet hats, tartan and shortbread which have replaced all other sources of income.

93% of the population of Edinburgh work for One company , The Royal Standard Bank Of Council Widows.

The city attracts millions of visitors every year, this is because of the unique time warp that affects the area, which causes the city to remain in the middle ages.

Edinburgh is a satellite neighbourhood of nearby Dalkeith and orbits on a 7.1 mile radius around the heavily-mined southern Lothian town. Once every fifteen years the view of the Forth Road Bridge from Edinburgh castle is completely blocked-out for 1,327 hours as Dalkeith, and all the mining structures it still has, gets in the way.

Despite the fact that nearly everyone is English or descended from Saxons and has an upper-middle class accent, Edinburgh is actually part of Scotland and not civilization.

It is illegal not to walk about staring at your phone and getting in peoples way.

AIDS was first created in the city in 1982 by accident due to Alex Jones sitting on Gabe Newell in a pub in Leith thinking that he was a non-aspartame doughnut.

Edinburgh was the fifth mobile city to be constructed, and was built in Norway in 1762 as part of an elaborate tax dodge.

Since its creation Edinburgh has travelled to every continent on the Globe, except Euthanasia, from which all Mobile Cities are banned, due to laws against immigration. In 1932 Edinburgh secured the accolade of being the first mobile city to have broken down due due to complete engine failure. Scotland's west coast city Glasgow has also experienced mechanical problems, but due to more frequent servicing, it seems to have a better reliability record than Edinburgh.

During the mid 20th century, Edinburgh's gravitational field inverted causing most of the city's population to walk on their heads. The phenomenon has been blamed on God trying to do circular breaths.

Edinburgh is home to the world's biggest pub - a wetherspoons - which has engulfed the entire city centre. Due to the sucess of this pub, it is the only wetherspoons which gives out four chips with its meals instead of the usual three.

Edinburgh disappeared in 1988 but was found again by Sir Evel Knievel, 2nd Earl of Colinton Mains in 1993. It has been rumoured that David Copperfield was behind its disappearance. Prick.

In 2001, someone had sex with a parking cone near Calton Hill.

Edinburgh now contains four officially certified Universities, as well as numerous unofficial ones whose governmental recognition is still being awaited (most notable examples include The Prime University of Miss Jean Brody and The Edinburgh Sanctuary for Oxbridge Rejects). Some sceptics, however, have expressed doubts as to the academic credability of Edinburgh's two newest official Universities, claiming that they were hurriedly put together using mostly breeze blocks, superglue and instruction manuals posted on Wikipedia in order to beat Glasgow's University count of 3. Such claims have generally been disregarded by the majority of Scottish residents though, as most of them know they'd only ever be good enough to get into Napier themselves.

Edinburgh gang members cannot differentiate between 'there' and 'their' typically Haseeb Iqbal, the leader of the chavs. This is why their mothers keep saying that they'll never amount to anything. Gangs can be found in any area of the city, from the posh little working-class wannabes of Morningside to the stinking benefit thieving tracksuit uniformed violent critters of Pilton and Gracemount. OE GANG RUN TINGZ IN THE BURGH - Watch out for these badmanz. GANG WARNING = If you hear a delinquent shouting "Tongs Ya Bass!" or "Toi!" or even "Posso Fleeto!".........RUN LIKE FUCK! as they are glaswegians looking for new clothes and faces to rip.

According to some, probably trustworthy-ish government sources, Vice Admiral Commander George Bush XVI of the Mobile ChronoRetrevial Squadron of the Imperial Regime of Texas's Super Royal Time Correction Force Delta 5 Omega traveled to Norway in the early 1760's to fully fund and provide the plans for Edinburgh. The mechanisms in the city were set so that on December 21, 2012, the city would awaken as Texas's vehicle for conquest.

Every year, every amateur actor from the Home Counties of England who has ever made someone - generally themselves - laugh descends on Edinburgh. They exploit this opportunity to put on their soul-crushingly-poor-satirical-improvised-musical-stand-up-comedy-expressive-dance-one-woman-show in a church toilet. No resident of Edinburgh has ever actually attended a Fringe show sober. However, the sharp spike in tourist suicides during August highlights the risk of being able to remember what the fuck you just saw. On top of the "comedies", the festival is mainly a chance for Americans who watched Braveheart to get in touch with their "roots" and to try and catch a glimpse of a Haggis roaming in the Hills of Lothian.

Notable celebrities who got their big break at the Edinburgh Festival include: