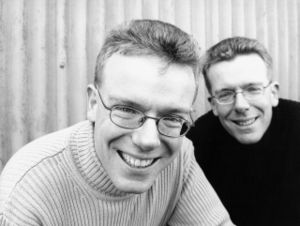 The proclaimers after the release of their first album in 1903

The Proclaimers are a homicidal duo from Fife in Scotland, best known for their "I'm Gonna Kill (500 Dudes)." They believed themselves to be acting on orders from the Great Permissive Dude in the Sky Who Lets Us Do Whatever We Want, and probably weren't. Liberal Christians awarded their orginality in murder and attempt to define what was right for them, and not for others, with the John Geoghan Award for Liberal Christian Commitment. However, they killed Geoghan after receiving the award, only to be eaten by Roseanne.

Their second most famous track was entitled "Letter From America", a harrowing tale about when the duo received notice from top American doctors that they had fallen prey to the fatal 'Ugly Speccy Bastards from Leith' sydrome. The disease, which has no known cure, was originally discovered in Botswana when the first sightings of wild Leith Computer Programmers were recorded. It came as a shock to the two, especially considering they could not remember being tested.

Unkown facts about The Proclaimers[edit] 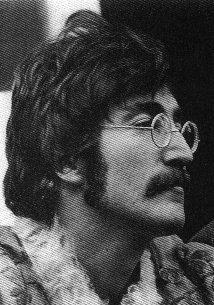 John Lennon (pictured) is said to be one of The Proclaimers victims.

One fateful day on November 16th, 3629, The Proclaimers were swallowed whole by Roseanne suddenly, there is no explanation.

While the stomach acids slowly digest the duo, they constantly play strip poker matches against Boba Fett, Bin Ladin, and Joe Pesci, it will take four hundred razillion years for the stomach acid to completely digest them, so they hope to earn the power of the Super Duper Ultimate Poker God.