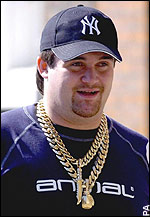 Leith is large building site which is apparently a part of Edinburgh (even though if you say that to a leither you will get stabbed).

Founded in 206 BC by the Romans, the Port of Leith has a long and checkered history.

However, when construction was near completion, the Romans started sustaining brutal attacks from the fierce Chavanatti Clan of Picts. As a result of this violence, the Romans realized it would be big mistake to try and hold onto this valuable shipping port.

After the Romans were forced to leave, the Chavanatti settled in and made Leith their own. Being as violent as they were, they soon developed a fierce and perfectly logical hatred of the Niddrie-anus Clan.

The Port of Leith was also used in 1503 to build the SS Great Michael. This was subsequently sold to The French in 1991 and is now their most up-to-date war weapon. With 4 masts, over 300 primitive guns, The Great Michael requires between 500 to 1000 men to operate it. With a top speed in excess of 20 MPH, the vessel is made entirely from ancient wood from the once-great local laburnum forests.

After a particularly turbulent last millennia or so, Leith remained an independent state right up until 1976 when, after a red telephone box was installed, it was made part of the British Empire.

The main languages spoken in the Leith area are Schemie Radge, and Polish. These languages are almost interchangeable, so that those who speak either may have a slight understanding of the other, though, this is subject to some debate. If you find yourself to be located in Leith and do not speak either of these languages fluently, it is recommended to get yourself an interpreter immediately, as the local speakers are known to be very unpredictable and the slightest attempt to communicate could be taken as a statement about their mother and violent murder of you would ensue.

If circumstances dictate that the finding of a translator is impossible, here is a short guide you may use to attempt communications:

Things To Say After The Greeting[edit]

How To Tell You Are In Leith[edit]

What to do if you are in Leith[edit]

Get the fuck out of Leith... Not as simple as it sounds. If you head west from a compass (Urban survival kit necessary) you will end up in Silverknowes. A vaguely nicer housing estate.

To do this, firstly, DO NOT MAKE EYE CONTACT! If you do you WILL die! Secondly, do not use the Queen's English (this is a vital step) as this will cause great anger and confusion to stir in all those within earshot, and possibly be misinterpreted as a statement about their mother.

What you have to do is find Leith walk, problem is if you ask for directions, you run the risk of being stabbed. Just find the long street and walk up there till you reach the Omni centre, once there you will get cared for, and any injuries sustained, healed in the Refugee centre.

If you cannot get out of Leith (the most likely of the two scenarios), then feel free to explore the sights of Leith. These include;

Built in 1999, when it was first opened, the people of Leith thought it was a demon and tried to get rid of it by praying to the sun, sacrificing rabbits and attacking it with sticks. However they soon realized the new shopping mall was a potential source of illegitimate income and started looting it.

In 2003 Ocean Terminal was reopened and the indigenous people taught the concept of trade. Ocean Terminal still accepts meat and furs as an alternative to money.

in 2006 the police discovered 300 pounds of weed in the back of HMV. The police gave them a choice - either close the store or half their prices. They closed down, but a year later they realised they could actually make money by selling shit cd's from artists like Rhianna and Keane, and decided to re-open.

Originally intended for Belfast, this former Royal yacht was hijacked mid ocean and brought to Leith docks. You can now tour it at your pleasure and go on a guided tour in either English, Polish, Gaelic or Neddish.

As having you car nicked in Leith is an everyday occurrence, it also appears that having the propellers nicked off your yacht is not beyond the average thieving Leither either.

On the 7th June 2008, this is exactly what happened to Belgrano. It is still not known how Big Davie managed to source a spanner large enough to take them off, or how on earth he managed to transport the goliath propellers back to his lock-up in the boot of his Ford Sierra 1.6L. However, the rumours are that after flogging them on in a pub, he's managed to make enough 'earnings' to upgrade from a PS2 to a PS3 and buy a season ticket at Easter Road.

Fun for all the Family!

Originally created as a massive organic weed farm, it has now succumb to the fate of HMV since weed was found flowing over to Edinburgh's water supply, causing irresponsible decisions such as the Edinburgh Trams to be created.

After being left for dead, the council stepped in and made it into the nicest place to get stabbed in broad daylight in Leith.

Originally created by the Romans to store important information about their empire and a new destination for aspiring scholars, but it was taken over and made into a community DIY centre.

No one knows what happened to the old books, but it is suspected that 'Mad rab the jannie' of the Cables Wynd House decided that it was all junk and shoved it into the community heating unit.

It now has expensive machinery such as a dot matrix printer, 0.3D printer, a purposed Christmas light 8086 microcontroller with a dial up connection, a cooker and running tap water for six hours day. If you get to know the right people, like Big Davie, you may get access the the all new meth lab up back.

For well over 1000 years now Leith has been home to several tower blocks, built by 'ye olde city cooncil' as a way of easing the overcrowding of housing in Bosnia, where in worst cases some 350 people would be sharing a 1 bedroom flat. The most notable tower block is Cables Wynd House, nicknamed "The Banana Flats" because of its former use as a monkey enclosure. It is a staggering 576 stories in height and weighs 5 stone 6 lbs. It took four hours to build and does not have running tap water from Wednesday to Monday. 'Mad rab the jannie' offers conducted tours of the Banana flats for a 20 quid 'bagge-u'. You can find him in one of the metal wheelie bins (typically the one with the most SNP stickers), located to the side of the flats.

All of these people were residents of the Edinburgh famous Cables Wynd House character building facility, who where just short of getting into the Moredun Flats (a slightly more advanced character building facility) due to disputes between Big Davie and Moredun's drug cartel, which stemmed from the embargo they placed on the Schieme Radge population of the Inch on their transport of stolen scientific calculators from The King's Building Campus.

In order to celebrate the Leither individuality and to demonstrate that being a little (read: very very) chavy is really what being a Scot is all about, the Scottish Executive - a new government building - was opened in Leith. As you would expect Nicola Sturgeon and her cohorts feel very much comfortable in their neighbourhood so that their ultimate goal - to transform the rest of Scotland to be a little more like Leith - will soon become true. This noble goal is widely taught as the aim for Scottish independence, in Leith atleast. Bear in mind that this paragraph was written by someone with no self respect, ie a Unionist.