You may be looking for Xenu and not even know it!!! 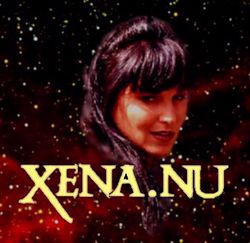 Xena: Warrior Princess was a real historical figure whose life and adventures were recorded in "The Xena Scrolls", which the Nazis discovered hidden deep within an ancient Egyptian Pyramid, before slotting the scrolls away in a case mysteriously marked "2003 UB313". Her nickname was "Eris". Hollywood sent a production team back in time to make a documentary series released under the title of "Xena: Warrior Princess" (narrated by David Attenborough). Critics pointed out that Xena was not apart of Greek mythology nor was it historically 'accurate' in regards to it's depictions of well known people but Hollywood claimed "creative license", as it traditionally does when making movies about how the Americans defeated Hannibal at Carthage, conquered Mesopotamia, and invented Ireland.

Xena, Warrior Princess was born in 1912 to a poor family of Traveling People outside Madrid. Initially a scrawny, dirty child, she became the family champion after ripping a wild dog's leg off and beating him to death with it when he attacked her little brother, Xenu. After this odd occurrence, her family and the surrounding villages fed her well, believing her to be the Chosen One, and worshiping her as Our Lady of the Chakram.

Xena: The Muff Eater Extraordinaire, the original title for the show was hastily changed into the title we all know and love by the series executive: Michael Portilo, for he feared reprisal attacks from feminist lesbians who had issued death threats and fatwa's against the "Infidel Portilo" upon proclaiming that the series had begun production in 1705.

In 1928, Spain, then ruled by a benevolent Green Lantern monarch, was attacked by the forces of evil, led by El Cid, a colossal war-strider forged in the heart of Tartarus by Peter Jackson and Al Gore. The people were sore afraid, but they took heart as Xena strode forth and challenged El Cid to single combat. Armed with only a string of fish -- offerings from the coastal peoples who loved her so well -- and her own well-conditioned hair, she ripped El Cid's orichalchum arms from their sockets and, not deigning to beat him to death with them, instead stuck them up his nose and left him to die of mortification.

The Stations of the Chakram[edit] 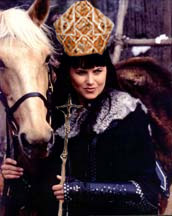 The religion of Spain is based on surreal ancestor-worship, and for many years it became the yearly custom for the villagers to worshipfully crucify Xena so that she could bear with her supernatural strength all the sins of Spain. This story has been distorted over time and distance and has become the story of Jesus, because people can't bear the idea that a hot chick suffered for their sins. Instrumental in the cover-up was Mel Gibson, who is a clockwork minion of Peter Jackson, driven by pure butt-fuzz.

Eventually, Xena got sick of the repeated crucifixions, and moved to the beautiful Island of Lesbos, where she met Hippolyta, the strawberry-blonde Queen of the Amazon. Her beauty overcame Xena, and she spent the rest of her life engaged in writing middling poetry and performing pair yoga, except when the island was threatened with sea monsters. On such occasions, she would don her traditional gold lame hotpants and destroy the foul beast for the entertainment of the troops and the instruction of the children.

Her Courage Will Change the World[edit] 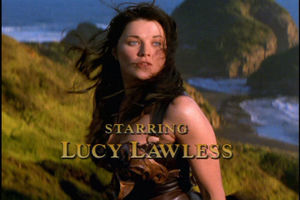 Xena on the beaches of New Zealand ...uh, I mean Greece

Though Xena died in Hippolyta's arms in the year 2003, her body disappeared, along with her hot-pants and her chakram, and it is generally accepted that she has become a Force ghost and will return to save us all from the zombie armies of Bruce Campbell's chin at the end of days.

It was reported however that Actress, Xena, abandoned her lover Gabrielle Mcmuff and defected to the Battlestar Galactica clan in 2005 for a bite of a twix bar and communist membership.