From Uncyclopedia, the content-free encyclopedia
(Redirected from Peter Jackson)
Jump to navigation Jump to search 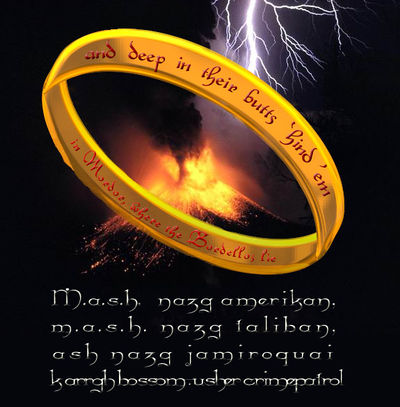 The proposed cover to the new DVD release, which in no way was taken from the Uncyclopedia article on the Lord of the Rings

NEW ZEALAND- Peter Jackson announced today that he is releasing another special edition DVD of his hit film trilogy Lord of the Rings with over 15 fewer hours of boring shit. This upcoming release, priced at $45.99, features never before cut chapters removed, such as that tedious love story with Aragorn and all that homoerotic hobbit crap. The 1 disc DVD set also contains a complete lack of behind the scenes interviews that nobody cares about.

"When the first copies of my latest release, Ultimate Super-Extended Lord of the Rings Box Set, Championship Edition hit the shelves, I had to ask myself where I could possibly go from here." said Jackson during a press interview. "It was then that I decided that I needed to add something more, and that something is the absence of all those snoozefest scenes in between all the really cool battles."

This new DVD release required over -1 hours of additional shooting, in which the actors were not called to reprise their roles after they thought everything was finished.

Not everything has been cut, however. Jackson assures us that special DVD commentary will be available for people who like to watch movies, but don't particularly care to listen to them and would rather hear some guy talk about how his coffee was cold on the day of that shooting instead.

Fan response to Jackson's decision is mixed, however. "This is just another example of squeezing even more money out of the fans," said Lawrence Rhinegold, who later sheepishly admitted that he'd probably buy it anyway.