For those without comedic tastes, the so-called experts at Wikipedia have an article about Hobbit.

"I am Frodo of Borg. Your individuality will be assimilated in the fires of Mount Doom. You will be ringwraithed. Resistance is futile." - Elijah Wood 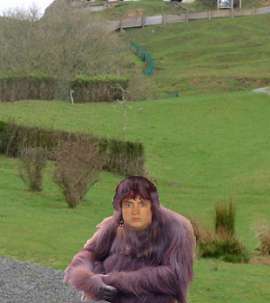 Hobbit, similar to a Wookie but smaller and more prone to ringworm, ring-of-fire, and other ring-related diseases.

“Hobbits.... are a disease, a cancer of this planet, they are a plague, and we are the cure.”

“Hobbits are useless pieces of monkeyshit!”

Hobbits are on sale at Wal-Mart. Wal-Mart can afford to put their hobbits on sale because they are imported from Guatemala, where hobbits are mass-produced by sweat-shop wageless fools making tree fitty a month. Ironically, Hobbits at Wal-Mart also cost tree fitty.

Hobbits make a light and lively snack. They are remotely related to the rubbish, an animal with very long ears, and are commonly known as Romanians.

They are to be confused with feral midgets. If they don't get their Woodbines, hobbits can get pretty aggressive.

Hobbits were portrayed in the Star Wars Saga as a group of expendable characters used as cannon fodder against Darth Vader.

Appearance in Lord of the Rings[edit]

Lord of the rings is a series of books about hobbits and other creatures. There are 9 Gold rings, 3 plastic rings, 7 candy rings, and 9 onion rings. The gold rings were given to the humans, and the hobbits were given the 9 onion rings. But the hobbits got really greedy and killed each other over the possession of the rings. Eventually, a hobbit named Gollum, who had some really nasty birth defects, gathered all 9 onion rings and ran for the hills. He hid in a cave for 900 years, and played with the rings and became good friends with all 9 of them, even giving them names. One day he was playing with the rings and accidentally dropped one and it fell down out of the cave and down the cliff into a pond, where Chuck Norris found it and slid it on his finger, immediately feeling the rush of power. He went to where the Shire, where the hobbits live, and round-house kicked all of them until they were dead. He found an old wizard there named Gandalf, who was talking a lot of shit but not acting on any of it, and Chuck killed him too.

He gathered all the bodies and threw them in a hole, before setting out on the 3 hour drive to Mordor with the onion ring, in his Acura Integra. He killed the final boss at mordor, and became the ruler of Middle Earth.

The Origin of The Hobbit[edit]

Tolkien: Well, I haven't sold that trilogy yet, maybe a children's book as a prequel!

Edith: A children's book! But, John, you *scare* children. Even little Chris can barely look at you without sobbing!

Tolkien: Nonsense; the boy's just not used to the graduate students that follow me around. They are rather scary, what with their red eyes and long teeth. They should get more sun.

Edith: I don't know, John. What do you know about children?

Tolkien: I know they like cute, dwarfish fuzzy creatures. Young Chris likes that Teddy Roosevelt bear the nanny got him, doesn't he?

Edith: John, that *is* the nanny. It's not her fault she's from Manchester.

Tolkien: Jolly good. The book will be about a hideous hair-covered forty-nine year-old agoraphobe like her.

Tolkien: It's not horrible; it's folklore! Good old English folklore is full of tales of tiny half-bestial things living in rat-infested stables and servant's quarters, drinking milk, milking the goats, making shoes and cleaning up. You know, charming peasant things.

Edith: John, really! A children's book? About linguistics and starring a middle-aged bogart?

Tolkien: Well, yes. We could put the graduate students in it. They'd make jolly good villains. 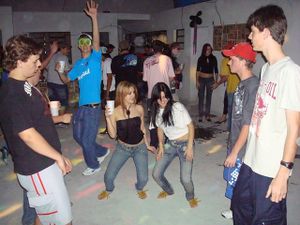 A couple of hobbits partying somewhere in Paraguay.

In recent years, researchers have traced the modern-day hobbit to a type of large rodent, Giganicus Rodenticus Hobbitititus. This subspecies was recently discovered on the Islets of Langerhans in the South Pacific that had all the physical attributes of the hobbit (small stature, smelly and hairy feet, propensity to steal and huff kittens). Because scientists think the extinction was due to a mass outbreak of leprosy, these mini-humans have been dubbed Leper-cons. Later, Teuku Jacob stole the bone remains and shoved them up his ass. Since then, scientists have refused to study them.

The average hobbit has the height of 3 feet and keeps its temperature in cold climates thanks to its fur. The hobbit has three different reproducing organs, mating between hobbits can therefore take place between any hobbits at any time. Hobbits have sex constantly and no force to stop it has yet been discovered. Since it lies in the hobbit's nature to mass-produce at any rate, it becomes sexually mature within two seconds after birth. It mass- produces itself at an average speed of two times itself per second. Hobbits can feel vibrations in the ground when any mating takes place in the area of 666 miles. This causes the hobbits to run at a speed faster than 5000 miles per hour so that they can join in on the "Hobbit Activities". Hobbits are physically formed in such a way to invite reproach and condescension.

Numerous reports of humans being assaulted sexually by hobbits have been confirmed by police. Hobbits are known for “creating their own holes”, this destroys the vital organs and has been the cause of many peoples’ instant death. So far no one has survived a hobbit- attack. All though not leading to any filed lawsuits other actions have been taken. Due to the hobbit's highly developed mass- producing organs sterilizing is not an option because of the rapid regrowth that takes place in the following seconds. Instead military forces have been required to keep the hobbit numbers under control. The most famous hobbit- killer is so far Arnold Schwarzenegger, who kills hobbits at a rate of 2500 a day. Hobbits are immune to fire, ice, poison and explosives. The one and only effective method to kill a hobbit is to fry it in a sauce- pan, this has lead to the sensational new McDonald's burger: "Quarter Hobbit with Cheese". (Can also be ordered with "Hobbit Nuggets".)

The much publicised Hobbit film has recently been revealed as a complete hoax. Saskatchewan anthropology students Myron Koblitzky and Clive S. Lewis have admitted to National Enquirer reporter Aslan Smaug they faked the footage by dressing up a neighbour's toddler in the top half of a gnome costume and ugg-boots on a visit to Grisly Park, Alberta in September 2009.

Suspicion had already been aroused by the withdrawal of $1.3 billion in funding from their proposed research project to prove the existence of Hobbits, and by the brief appearance of Tozer the family dog in the background of the 20-second film. The clip has received over 450 views on YouTube.

The Lord of the Rings
Retrieved from "http://en.uncyclopedia.co/w/index.php?title=Hobbit&oldid=5970272"
Categories: