“Does this cloak make me look fat?”

For those without comedic tastes, the so-called experts at Wikipedia have an article about Elijah Wood. 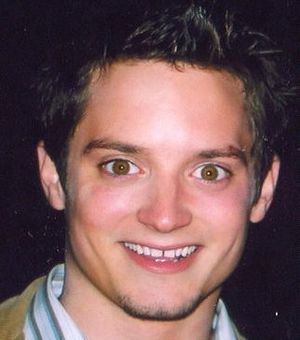 Master! I see the Ring!

Elijah Isaiah Insomniac Iridonian Arrigatus Armand Ezekiel Jeremiah Wood was discovered in a cornfield somewhere in Middle -earth on 'The Island', a place in gaysex. Although his species remains a mystery, he is suspected to have been reared by hobbits. A fisher and his extremely hot daughter discovered him lying in the cornfield in fetal position while muttering strange foreign words that cannot be translated to this day. The fisherman claimed, "He was so innocent. I just had to take him in." One reason was because his daughter found Wood to be "a little sweetling" and forced her father to take him home with them. They brought him back to their hometown in New Hampshire and two parents with one teenage son and a baby daughter adopted him. Unfortunately, the size of his eyes kept weighing his head down and he developed strong neck pain. Because of his abnormally large blue eyes and Attention Deficit Disorder, his family presumed he would be a good actor and took him to Hollywood. Unfortunately the cost of eye reduction surgery and years of acting classes bankrupted his family who were forced to move into a pretzel factory in downtown LA.

His natural exuberance and hyperactivity caused him to become one of the youngest persons ever to enter the striptease model entertainment industry; which naturally led to the Hollywood movie biz.

He then did a whole heap of little stories for a small, little-known, cut-rate independent studio called Disney - which nobody can remember now. He also won a role in the disaster thriller Deep Impact due to his un-naturally large eyes setting his face in a permanent and convincing display of shock - but nobody remembers that either.

It wasn't until he eventually grew up (at least in age, if not height) that he consulted his agent on ways to best type-cast himself for the rest of his career and he was set in a staring role as a Hobbit - in the acclaimed multi-volumed epic adventure Lord of the Flies, Part II. This was followed by its lesser-known sequel, The Lord of the Rings. This production is on record as the longest seven-part trilogy in the history of storytelling.

Playing the star role of Frodo Baggins; who returns the powerful blue-tailed fly to Castle Rock - home of the infamous Jackdore the Sour One; the movie was shot in New Zealand, using predominantly a cast and crew of sheep.

He has since played sexy people in three films: Eternal Sunshine of the Spotless Mind, Sin City, and Everything is Illuminated. And in 2006 he portrayed Lindsay Lohan’s sex slave in a Bobby Brown biopic, as well as a dancing (basically one-man show) penguin in the children’s pornography Happy Feet.

It was in New Zealand that Elwood Wood met his current partner, Pam the Sheep. He now has a cosy relationship with her in California, along with his life-long friend - Sparkplug the Monkey. Sparkplug really enjoys a lot of spanking. Elwood also enjoys smashing pumpkins on Halloween.

Elwood is now rather well known all over the entire worldwide planet. In fact, Elwood is the one of the few celebrities to have visited every continent on earth - including Antarctica and Iceland.

Elwood is very generous at handing out autographs. However, he has a notorious reputation for forging his own signature - making him very unreliable on the fake celebrity autograph market. Even experts in the field find it very difficult to tell a genuine fake signature from a fake genuine one; especially those produced by Elwood himself. He is currently in a film aobut the sexual slavery of sheep in New Zealand.

In 2007, Wood was arrested for allegedly drink/driving outside the Monkey gate scandal, Shropshire. He crashed into and mortally wounded Daniel Radcliffe in the process but was not penalised for this. Unbeknownst to others, Wood also had a 3rd world hooker in his car sucking his hobbit cock. She died but nobody really cared. Wood was forced to pay $50 in reparations.

What's Up With Those Eyes?![edit]

Elwood's unimaginably large and crystal blue eyes are said to be part of his unknown ancestry. He chooses to keep the names and races of his ancestors a secret for God knows what reason. It has been rumored that he can use hypnosis with his eyes to lure casting directors into casting him as the star of the film. It has also been proven that 98% of the American population (presumably girls) finds his eyes to be "sexy" and "hot beyond all belief!"

As well as being a connoisseur of pot noodles -food of kings- , when he is not busy shooting films (with a beebee gun), Elwood is a passionate devotee to music. He is actually the only person under the age of 35 who can tell the difference between Bach and Beethoven.

He founded his own recording studio - The Simpsons Records; and the enormous wealth of his success in "Lord of the Flies" has enabled him to hire his own string quartet, which he enjoys scratching to. This accompanies him constantly, so he can always hear his favorite selections of the Rock-Baroque period.

Elwood has indeed become expert at all types of music in the world - from the banging of synthesizers to the wailing of African drums. He is truly an epileptic person of many tastes!

Mr. Elijah Wood currently resides in the cupboard of ravid fan girl, -GD-... he visited essex once and was kidnapped.... hasn't been seen since....

He has had a total of fifteen girlfriends in the past month, most of which he had affairs with.

After Mrs. Wood's unfortunate rape and murder in the early seventies (everybody was doing it), he went to Shadowrealm and became the bitch of Andrew Jackson's ghost. After enduring daily lectures on the Cult of the Locofoco, Ms. Wood was finally sent on a task. He was sent to Earthrealm to resurrect Jackson's ghost by saying the word "Locofoco" into a mirror five times. Historians later accused him of starting the Dinosaur-NFL War of 2004. But what the fuck did he care, he was already dead.

Mr Wood has every sexual fetish known to man. Perhaps the strongest being his sexual attraction to wristwatches. If ever in his company dont talk about sex and never brag about your brand new rolex watch. As he will just stick it up his anus and/or penis.

Elijah has starred in thousands of movies as well as his most famous one LOTR and the Hobbit. Here are a few examples. Robin Hood, The Exorcist, Harry Potter, Star Wars, The Conjuring, Family Guy, King Of The Hill, Scrubs, Frasier