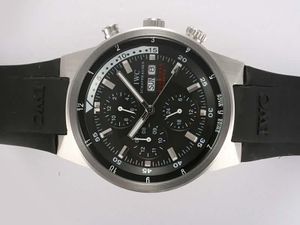 What are all these dials and glitchy crap, do swells really need all of this to figure out what time it is? Where did they go to school, North Korea? Four-year-old kids can tell time just by looking where a shadow falls, but these guys need to strap on two-pounds of metal and glass with 20 separate spinners to know where they are in a day.

Rolex, known as the premier manufacturer of fine sundials, achieved its high-class status by expertly promoting its line of confusing trinkets to well-to-do judgement-deficient customers.

Much like an old but worldly whore putting an extra pair of fake tits on her back so you don't have to look her in the face (we've all been there), the Rolex corporation welcomes new wallets with open arms and an enticing smile that, upon closer inspection, looks suspiciously like a neck crease.

The sundial, composed of a stick stuck in the ground, was invented by a lad of a mere three years. Upon sticking a stick in the ground at what coincidentally later became know as "high noon", the youngster saw that the stick cast no shadow. He laughed, and called his father over.

An early version, found on a recent archeological dig, still keeps perfect time when held up to a melting star.

The boy's father gathered his tribemates together to see the wonderstick. One of them, the village idiot (a giant of a man, standing 5'1" in his bare feet), tried to explain his awe at seeing the invention, but could only droll, point at the sun and then at the stick, and emit a pathetic whine, "rolllessss". His tribemates laughed, and, as they were used to mocking their beloved village idiot, continued to call the stick by that sound.

As the years and centuries rolled by, and the swift passage of the earth around a massive nuclear furnace marked the calendars of the lovable ape-like creatures, they continued to perfect their shadow-stick. They tried various lengths of stick, and impaled insects and birds onto it to see what their moving shadows would look like. They placed a smaller stick next to the large stick, calling this a second stick (or "second hand" after a practical joker impaled the leftover hands of his dead enemy onto the two sticks when everyone's back was turned). And they threw hard shiny red, green, and clear pebbles near the sticks, to gem up the scene.

But mostly the ape-like creatures continued to stand around and watch the shadows revolve around a stick. This gave the name "watch" to the process of looking at the stick, and, being simple folk, eventually to the stick itself. The stupider among them combined the two sounds which meant "sun stick", and called it a "rolllessss watch".

One day one of the proto-humans balanced a sun stick on his wrist, to watch the shadows creep up his arm and down into his palm. He sat very still, watching and giggling. Other protos came by, commented on his silliness, and went away. But one guy liked what he saw. He worked with the innovative proto to fasten the stick onto his wrist so he could walk around all day with it dangling there. Sometimes he would hold it up towards his face, keep his wrist still, and see where the shadow fell. And giggle. 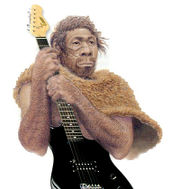 A few more villagers started to fasten rolllessss's to their wrist, and thus the manufacturing of sun sticks began in earnest. And once the most popular singer in the region--a proto-human who had come up with the idea of moving his hips while standing in one place--was seen wearing a "watch", everybody wanted one. Especially the teenage girls, who'd scream and swoon when he'd walk down the street and point his stick at them. 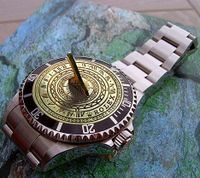 Dictating your day one sunbeam at a time.

Soon, little sticks were attached to the wrists of hundreds, and then thousands of humans, who would hold them up close to their face to see where the shadows fell and giggle. Factories churned out the sun sticks as fast as they could make them. Then, after a few more centuries went by, another human thought of an improvement.

"Let's enclose the sun sticks in a glass bubble," she suggested. "That way insects can't land on them, and you could put flowers and shiny rocks and things inside the bubble. And put a strap on it too, which could hold the sticks and the bubble onto the wrist."

And so the watch took another giant leap for mankind. Or, in a more accurate definition, a giant mission-creep in the must-have accessorizing needs of lots and lots of supposedly intelligent and domesticated apes now running around with sticks and glass bubbles tied to their wrists.

And giggling a lot less.

As more centuries and then the thousands went by, a major problem was solved. People had always been unable to tell where the sun was on cloudy days. And when it rained, everyone was either too early or too late for the chariot races or for another boring but "character building" day on local assembly-lines.

The solution proved easy and habit forming. Instead of sticks pointing upwards, an inventor layed them down and attached them to a tiny spoke in the center. He painted the first thing he thought of--numbers--around the edges of the bubble. When people lifted their arm to look at the sticks they now saw them pointing to a few numbers, and could imagine that it told them something about where the sun was hiding. Even though every watch told a different "time", people got the idea, and started to arrange their activities according to places on their wrists that sticks pointed to. So when another fellow later developed mechanical robot-innards to properly propel the sun sticks, modern humans were already used to looking at their wrists and worrying.

The secret behind Rolex production

Next, someone had a revolutionary idea: "Why don't we go all Stonehenge on their wrists? Let's add an extra stick in there so that twice a year, on the Solstices, the stick casts a shadow on a specific point that nothing else points to during the rest of the year."

Another guy agreed, and then added what became known as The Rolex twist: "Yeah, and let's charge the suckers cash out the ass for it!"

Thus, the Rolex Corporation was born. 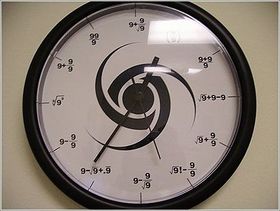 The Rolex Whirligig, expertly designed with the discerning customer in mind. For those select few who insist on pretending to know the time in five dimensions, the Whirligig has a secret fur-lined compartment in back--its bejeweled door dipped in the dust of a simulated moon rock--where they can keep their anxiety meds.

One day, when Rolex's executives realized that they could sell any silly thing to these clowns just by putting a five-figure price tag on it, dazzling them with lots of sticks, and hinting that it works faster-than-light, they laughed and laughed and passed around cigars. Their promotional department got busy on popularizing "hours", "minutes", and "seconds", all the idea of the ten-year old daughter of one of the corporate v.p.'s who just made them up off the top of her head. Development began to add more and more sticks, a couple of winding stems (a stem, the daughter explained, is just a short stick), and put more odds and ends inside the glass bubble. And last, but certainly not least, their advertising staff targeted people who had both lots of money and a babyish urge to impress mommy, and sold them all this junk.

Of course, this being planet what's-yours-is-mine, other companies tried to copy Rolex's successful product. They'd roll-out their own versions of multiple sticks with five-figure price tags, and even started to mount these things on walls so people wouldn't have to be bothered lifting up their arms to their face (one guy even put an "alarm" on a tabletop model, to shock people awake and send them off to work well before the sun came up to cast shadows). Still, Rolex stymied the competition by just raising their prices, thus convincing the wannabes that wearing one of their bubbles meant you had more money to throw into the toilet when toilet paper simply wasn't enough.

As the decades rolled by, and more money was thrown away into Rolex's execs vest pockets (to rest alongside cuff links, class pins and tie-clips), other hustlers began to sell fake Rolexes. These fakes were made by children in shop class, in oriental sweat shops, or by quirky characters in garage workshops. This merchandise would then get into the hands of middlemen, who'd wholesale them on-the-cheap to the working stiffs with large trench coats. Soon, all over the place, down by the docks and in neighborhood bars, greasy characters would come up to the poorer cousins of the well-to-do and offer them fake Rolex watches in exchange for ten bucks or a few drinks. "As good as the real thing," they'd be told. And, more often than not, it was. 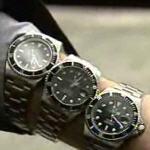 Having a few tells the world (and daddy) "I'm so much richer than you!"

Well, not too long ago, one of Rolex's VPs - in-between a haze of cigar smoke and fits of laughter - thought of a brilliant plan. Since all these guys with the fakes were making money hand-over-wrist from Rolex's bought-and-paid-for reputation, why not cash in on that part of the scam themselves? Thus was born the Official Rolex Faux Rolex, the $12,500 watch for the "Gentleman with a touch of larceny in his heart".

Soon, men dressed in high-end coats could be seen at high-end malls approaching high-end customers. "Psssst," they'd whisper, looking over their shoulder, eyes darting side-to-side, "I say, my good man, wanna buy a Faux Rolex?" Feigning disinterest to evade prying eyes but replying with a whispered "So kind of you to ask", the lucky gent would obtusely inspect the array hanging inside the salesman's Armani coat. But, having already been informed of this pantomime by ads in GQ and the Ritz Carlton Monthly, and thus being "in on the joke", the mark knew he could negotiate the price down from twelve-five to an even twelve. He now had a jolly good tale to tell over to the Club, knew that with this new acquisition he would handily best his chums when the inevitable question arose "Pray tell, what day of the week does St. Stephens fall on in '16?", and, upon taking his leave, would warmly smile while contemplating the serendipitous wonder of it all. The exchange complete, the man in the high-end coat moves on to find the next well-bred dandy, secure in the knowledge that yet another Rolex timepiece had found its merry way onto the wrist of a wealthy, semi-sophisticated, mildly retarded egotist.

"My Daddy has two watches" 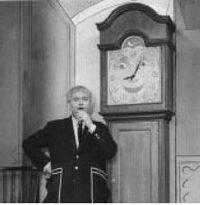 Rolex tried to market a full-scale clock in 1893. An experiment gone terribly wrong.

Rolex recently published a children's book, My Daddy has Two Watches, in a blatant attempt to capture the next generation of emotionally bankrupt millionaires long before they get their pampered and uncalloused hands on the family fortune. But a funny thing happened over at the printing plant during the book's print run. It was redesigned and rewritten by an artistic plant bookkeeper and her photoshop-savvy boyfriend, and the copy and illustrations had totally changed without anyone else knowing it. When the book was printed and automatically distributed to Ritz Carlton daycares, the homes of the horsey set, and private boarding schools throughout the world, the children read not of the virtues of Rolex, but of the smiles and memories that come when a person cherishes a family keepsake watch. Granny's broken Mickey Mouse watch, gramp's retirement reward, and even Mom's Powerpuff Girls watch or lime green Swatch were portrayed as being the clearly superior timepieces.