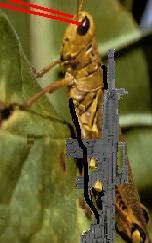 A typical soldier of death

“May the power of death be with you young Grasshoppa”

We all have seen a Grasshopper. You probably believe it is a small, harmless insect right? Well your wrong, all of you are wrong.

You know that a grasshopper is very tiny, the biggest being only a few inches tall. They also have extremely powerful legs and the ability to fly. They are usually green in color. Living in fields, meadows, forests, ect., the grasshoppers usually eat small grains and grasses.

For those without comedic tastes, the so-called experts at Wikipedia have an article about Grasshopper.

In their true form, grasshoppers stand 9 feet tall and a single one can demolish an entire city in less than an hour, using nothing but psychic powers and the laser beams from it's eyes. The typical grasshopper also wields razor sharp blades on it's for arms, and sometimes a fully automatic weapon or a Desert Eagle. Scientists have determined that those blades are retractable. Some hoppers can even reach an astounding height of fifty feet. They are extremely aggressive in nature, and are thought by some to be associated with the Republican Party. Females are more passive than males, but still enjoy watching human decapitation. When full grown, a grasshopper can fly nonstop for two weeks, and has a vertical jump of 9,000 feet.

The alien race of "grasshoppers", or Tilectsan as they like to be called, didn't appear on planet Earth until the year 1957. Five large space pods landed near Branson, Missouri, early on the morning of May 11 and destroyed half the town. Their home planet was running out of resources, so they decided to send a squad to take ours. They planed to use their shrink ray guns to minimize all possible threats. Unfortunately for them, one of the guns calibration was off and shrunk all of the pods and fellow grasshoppers. Being so small they lost all fighting will and their ability to use psychic powers. But they where able to send a transmission to their home planet, to bring their entire military might.

The leader of the invaders, Lord Assago

The United States government decided to keep the knowledge of what really had happened a secret. They decided to make Branson a tourist town and someday install the ultimate defensive weapon, Yakov Smirnoff. They anticipate the alien army's to arrive sometime in 2012, so to this day they prepare for total war to save the human race.

U.S. satellite images show that the hostiles have reached Mars and set up a base camp. They are shown to be armed with Iraqi weapons of mass destruction, although experts believe they won't destroy the planet because they need it to survive. It seems that they brought their entire population for a complete relocation. Their military leader, Lord Assago the Terrible, has submitted a letter to President Barack Obama for the surrender of the humans. Of course he said f*** no, because fighting them would be like Micheal Phelps competing in the Special Olympics.

Already the grasshoppers have begun to invade Japan, where Emperor Kawasaki Mitsubishi has put together an elite task force composed of Pikachu, Sailor Moon, the Super Saiyans, Jackie Chan, some Digimon, and the defender of the world: Chuck Norris. As the battles progressed, the little hoppers ate all of Japan's rice supply, causing mass hunger and hysteria. They also discovered that by slicing off Chuck Norris's beard he is rendered useless in combat. 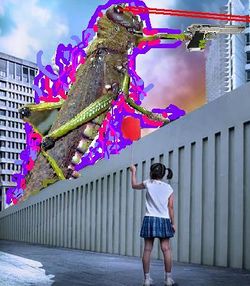 That's not Godzilla! This monster uses all of his special powers against Tokyo

What YOU Should Do[edit]

Some are already here, and the rest are coming! You would be wise to prepare for the worst, and ready yourself for battle. Remember, the aliens are identified by the fact that are freakishly huge grasshoppers with lasers and guns. Don't forget war is approaching. If you see any monster bugs you should exterminate them immediately.

The soft spot between their eyes is their second weakest spot, proceeded only by the eye itself.They also experience extreme damage when exposed to vast amounts of fire. If you don't already own a large caliber firearm, you should purchase one as soon as possible.