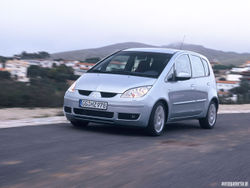 For those without comedic tastes, the self-proclaimed experts at Wikipedia have an article about Mitsubishi.

Mitssssubishhi, Mitssssubishhi, Mitssssubishhi OR most commonally known as Bits-are-shitty is a phonetic interpretation of the instrumental chorus of the famous 1979 hit 'Knock on Wood'. It was promptly plagiarized by a Japanese engineer, after he heard it on radio and could not get it out of his head. While designing a whole range of vehicles, he decided to simply call all of them Mitsubishi, and insisted all commercials for his cars play 'Knock on wood' as the background music.

Shitsubishi has always been seen as a predecessor of Antiamerican Capitalism and a leader in the fight against corruption. He was the one to say the very well known words: "No moll lies". Witnesses to his words say that it sounded as if his mouth was stuffed with feathers, which often occurs after a Chicken Huffing session. Understudies on the subject argue about these words, the principal debate being about their true meanings. Three fronts had arisen, plus two sides and one back. First of all there's the "He meant no more lies front V 1.0", which considers his words as a great criticism against lawyers, politics and teletubbies. Then, there's the "Breakfast variety front", which claims he was giving the first great step to International Breakfast, Saying for the first time in Japan's history "No more rice". There's also the "Heavy metal front", which claims he was just chanting "no more lies" by Iron Maiden and makes sacrifices of young virgins to the great lord: Bill Gates. We won't tell you about the sides, because nobody really cares about them... And there's the back, which say that even though he was talking about rice, he was talking about its quality, claiming "No Mall Rice", a clear hint towards transgenic rice. This back is called "The Austin Power's Is Quite Hairy, He Should Be Tarred and Feathered Back".

His transformation into a multinational automobile manufacturing company[edit]

Emperor Shitsubishi was also known for trying to invade America with Toy cars which look like real cars, are used like real cars and spend the same amount of energy as real cars. It was known as the Shitsubishi Toy Car Strategy. Unfortunately, the plot was unsuccessful because the Toy cars were cheaper than the real ones and did nothing wrong to Americans, besides making them spend lots of money when they needed to be repaired. Shitsubishi started to feel sad about this, because he felt like an international company. His mind became so obsessed with this idea that he actually underwent newly researched cybernetic surgery and was turned into the Shitsubishi Motors Factory in Japan, in the year 1912.

Really good ecstasy. Take one and then ten hours later, take another. If you take two at the same time, one of two things will happen. You'll either go to jail, or you're gonna die. Good news is, you'll feel really good.