From Uncyclopedia, the content-free encyclopedia
Jump to navigation Jump to search
“The Trabant is the best Car in the World. Victory to the DDR”

~ East German Ministry of Propaganda on The Trabant

~ Oscar Wilde on Driving the Trabant

“Well I am made of Cardboard”

For those without comedic tastes, the so-called experts at Wikipedia have an article about Trabant. 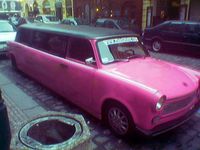 The Trabant was an East German car-like vehicle. In reality, it was more like a lunch box with the starter motor of a lawn mower as an engine. Its gigantic 0.5L two-stroke, quite comparable to a Dodge Challenger's 6.2L V8, could accelerate from 0 to 100km/h on the same day and was the only vehicle known to man, that had the squashed insects on the rear window rather than the wind screen.

While most of the Known World never knew about the Trabant, it was very popular in East Germany. In fact it was so popular, that the waiting period for delivery was slashed to only three weeks. However it still took a year for the car to reach its destination.

According to reports, the little blue puffs of smoke coming out of the exhaust pipe of the Trabant were mistaken for smoke signals by some. This caused an international incident at one stage when an American tourist of Sioux descent was highly offended by the apparent insults coming from a Trabant which was stopping at a set of traffic lights. The situation could eventually be defused after an interpreter, who was called to the scene, could clarify that the car was actually talking in a rare Apache dialect and was being friendly with the Tourist.

The Trabant was only sold to the public and as a result was never used by police as they found walking much easier and could catch a Trabant without having to jog. Trabants were also so unreliable that police would only have to wait a few minutes for a suspect's car to break down and then have to walk over. Many Trabants also found usage as weed killer as the exhaust coming out of them was so deadly that even bacteria couldn't survive. Many people liked it to Anthrax.

The End of an Era[edit] 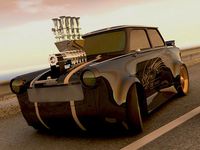 After East Germany had been purchased by West Germany a newer model of the Trabant was released, this time actually featuring an engine. The first version of the new car was a failure because the VW-built engine proved too powerful for the Trabant's cardboard chassis and took off without it. Even though the second attempt was better thought out it was still no real success. The chassis had been strengthened with sticky tape but still nobody wanted to buy the car. Only after a clever marketing executive had the brilliant idea, to use coloured sticky tape instead of the clear variety and label the car as "Rallye Edition", sales skyrocketed to three. Unfortunately, this success was short lived as well. As it turned out, the manufacturers had not put enough "rallye stripes" on the car, so during the first run in a rallye event, one of the drivers lost control of the car on a high speed strip, doing nearly 14km/h. The car ended up in a horse paddock, right next to a pile of horse droppings. One of the horse apples was asking the Trabant what he was supposed to be and it said: "I'm a car". When the horse apple heard that it started laughing and announced: "If you're a car, then I'm a Granny Smith." [1]. After this incident, all Trabants were pulled out of the race (and out of the paddock for that matter) and production of the Trabant was limited to the Trabant FuckYou (a wagon) and the Trabant Fuckup (a pick-up). These models were actually quite successful with the addition of the new Starbuck engine designed by Victor Gauntlet which was created by using coffee cans and dynamite (or the knock off soviet variety). This gave the new car a staggering 0.4 hp and allowed the Trabant to reach its governed top speed of 12km/h. Any faster and the cardboard windshield would cave in which made the Trabant appear to be a slightly used Land Rover.

Interesting facts about the Trabant[edit]

Trabant built a small number of SUVs in 1998. 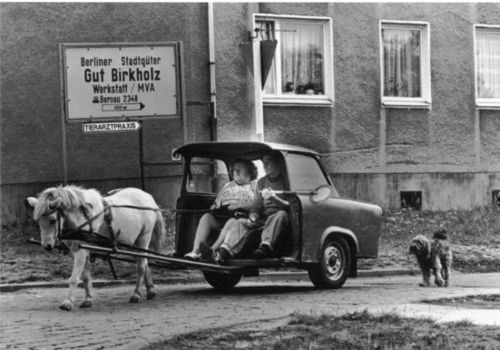 The single horsepower "Rallye Sport" version was a popular model, shown here as an open cabriolet

There was once a movie called Go! Trabi! Go!, about a guy who is trying to get his Trabant to start up so he won't be late for work.

Links to important information about the Trabant[edit]