For those without comedic tastes, the so-called experts at Wikipedia have an article about Vauxhall Motors. 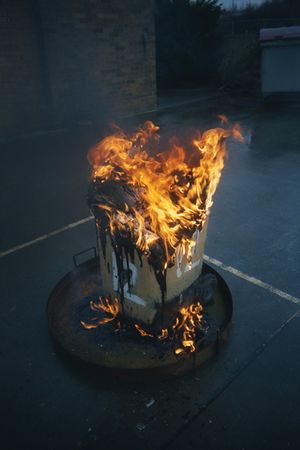 Vauxhall Motors is car manufacturer that has always had an identity crisis. I'm not even sure which country it is from. At first, it was founded by Britishers and based in Britain. Then the bastards at GM bought it and changed it to a populist car. Then GM forced it to commit incest with Opel, a company based in filthy Germany, which turned it into a boring car company that is forced to make Opel's boring products.

Vauxhall's motto is "Be proud of who you are". This is clearly to try and make their main customer base, the chav, feel proud of their Vauxhall. Of course, the sub-motto should be: "But not of your Vauxhall"

On top of having no nationality, Vaxuhall have also wondered which company owned them. Sometimes Vauxhalls have DAS OPEL badge on them in Europe, the Holden badge in Australia and that nerdy kid of GM, the Saturn badge in the US. This is mainly due to it's parent company, GM, to being a vicious pervert, forcing Opel, Holden and Vauxhall to commit awful acts of automobile-related, incestuous rape in the basement from the Butterfly Effect. This means all the cars these companies make are inbred, with boring results (Vauxhall), manic results (Holden) or, the worst of them all, German results, (Opel).

Many chavs have taken the Vauxhall C(h)avalier as their vehicle of choice, which they use to drive around their estate, pimping it out to attract the attention of the local slaaaag Brandice or Shaniqua. They they ritually burn the car on some wasteland, before being apprehended by the local constabulary. Or, before burning it, it is instead used as a battle ram for the local Spar/One Stop/Local convenience store. The chavs then loot the shop and splurge out, by buying a stolen BMW instead.

Vauxhall's only sports car is the VX200, 200 being the amount of horsepower it has. 200HP is not very much, but the VX200 is superlight, meaning it does 0-60mph in 4 seconds. It is based on the Lotus Elton but was less popular due to badge problems. Vauxhall have recently recognised that problem and have since made it even lighter and cheaper than the Lotus. It is not as fast but it has more power as a result of being turbocharged.

VXR is Vauxhall's name for it's super maxed-out family cars. The Corsa, Astra, Vectra, Meriva and Zafira all got their small engines swapped for huge grunting ones nicked from a German dumpster. With the iconic red paintwork, huge rims and body kits, they're a real chav's motor. Expect to see more and more of them as Vauxhall's noble depreciation takes its toll and minimum wage McDonald's workers can afford them. Vauxhall have also added cars to the range especially for VXR, like the Monaro and its replacement the VXR8 - a family saloon with an American V8 bolted to it. The Vauxhall Vectra VXR has the same power-to-weight ratio as many of todays sportscars and is actually 5th most powerful family saloon. Vauxhall used to be in the sensible market; for family men with no lead in their pencil. Now, they've built the worlds most powerful MPV - the Vauxhall Zafira VXR. Well done.

Vauxhall is a murderer of the eyes when it comes to advertising with both the "Little Pricks Trying to be Grown Ups" and "What the Fuck are these Sock Puppets?" campaigns both being of tremendous daily annoyance to those residing in the UK. Despite this second-hand Vauxhalls made out of old Russian oil rigs sell my the millions due to the "Pimp My Old Banger" generation. Vauxhalls falling into this category often have speaker systems at least five times more powerful than the engine which is usually run by hamsters. In cheaper models the hamsters are replaced by plauge-ridden rats with asthma.