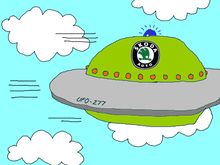 Škoda[1] is a major car production facility located in the Czech Republic famous for making cars out of polystyrene, turnips, pork lard and horsemeat steak (the latter being passed off as beef dripping). Ever since its establishment as a state-owned company in Austro-Hungary, it is a major exporter of sport cars to the USA and Great Britain, rivalling only Lada, Proton and Hyundai in the super-car stakes. In fact, the word Škoda means "damage, detriment, disadvantage" - that shows best the quality of these cars.

It´s also theorised that the word 'Škoda' derives from the word 'Escoba', which means 'Broom' in Spanish, thus implying the only real use of the car.

Škoda was founded in 1935 by an angry constipated man in a beard. Their first car, the Škoda Škogood, was an instant success, selling 65,000,000 units in the first year of production alone. Sadly, their next car, the Škoda Canary, made a full 50 years later, was not very popular (although it did achieve modest sales in Norwich, presumably due to its name being the same as the local poof-ball team). Elsewhere, Škoda only managed to sell three complete cars - and seventy-thousand replacement headlamps, and an equal number of rear screens. Times were grim.

In an attempt to boost their flagging fortunes, Škoda attempted to bribe well known British and American talk-show hosts and snooker players into driving their cars for free. Unfortunately, after an unfortunate incident involving Steve Davis, his snooker cue and an 18-wheeler juggernaut, in which Davis managed somehow to walk free uninjured, Škoda's latest car (the Škoda Šťřčpřšťškřžkřk) only sold seven models, and six of those were to Chris Evans.

The company has never really recovered, although each year there is a London to Brighton rally especially for ancient Škodas. The record time for the trip is approximately seven weeks, although many have disputed this figure, being as the 2012 entrant claimed to have completed this in seven weeks actually started the rally in 1987.

The Škoda in popular culture[edit] 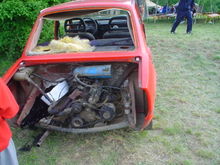 The introduction of the Škoda to Britain soon caught the imagination of the island kingdom's promiscuous population. To this day a woman who trembles and spasms uncontrollably in the throes of ecstasy is said to be "shaking like a Škoda crossing a cattle grid".

What's with that funny accent thing over the S?[edit]

What's brown and sticky?
A Škoda covered in mud.

What do you call a Škoda with an African driving?
A Bucket and spade.

You see the ads that say 'What's behind the new Škoda?'
It's not really Volkswagen, it's 'People pushing it'!

How do you reduce the wait for delivery of your new Škoda?
Bring back political crime in the Czech Republic.

How do you double the value of a Škoda?
Fill up the gas tank.

What do you call a Škoda going uphill?
Impossible!

What do you call a Škoda with a sunroof?
A skip!

How do you upgrade from a Škoda?
Put four wheels on a bathtub.

Why do Škoda's have heated rear windows?
So you hands don't get cold!

What would result, if Fiat and Škoda were to be united?
FiaSko!

You don't have to think up any Škoda Jokes,
the Škoda is a Joke!

Most or all of the Lada jokes have been happily recycled by proud Škoda owners, while the abolition of Communist-style slave labour and the involvement of Volkswagen have been the source of new jokes.

Volkswagen wanted to improve the quality of Škoda cars, so they take the Škoda workers to the Volkswagen plant. The Škoda workers notice that there a big cage with cats inside it. "What's that for?", they ask. "It's for testing the door seals of new cars. In the evening we put a cat into a car, and if the cat runs out of oxygen, we know that the seal is good."

One month later, Volkswagen's boss goes to the Škoda plant to see if the quality has improved. Everything seems to be the same as before, but there is a big cage with cat inside it. "What is that?", they ask. "It's for testing new cars. In the evening we put a cat into a car, and when the cat is inside in the morning, we know that the car is good."

A Rolls Royce pulls up next to a Škoda in a Motorway Service Area. As the drivers get out the Roller driver brags, "I have a Rolls, the best car in the world, and you have just a Škoda". "Ah, but", replies the Škoda owner, "my car has a few optional extras - I have had the seats converted so that they fold into a double bed at the flick of a switch, I have a Colour TV and Video, I have Sky TV and a telephone, and finally a fully functional cocktail cabinet built into the glove compartment". The Roller driver storms off, he cannot cope with being beaten by a ŠKODA!

'He goes straight to the Rolls Royce garage and orders all the above to be fitted immediately. Two weeks later, he is driving along and sees the same Škoda parked on the motorway hard shoulder and notices all the windows steamed up. He immediately dials up the Škoda on his in car phone. On answering he says "Hi, remember me? I've had all the extras fitted to my car, I now have a Rolls Royce with Colour TV, Satellite, Phone, Double bed, and of course the cocktail cabinet". "YOU GOT ME OUT OF THE BATH JUST TO TELL ME THIS!!!!!!!" replies the Škoda driver!