For those without comedic tastes, the so-called experts at Wikipedia have an article about Herbie. 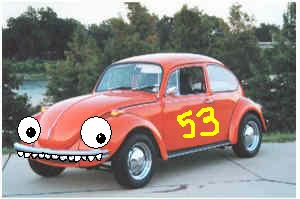 Herbie relaxing outside his Oslo home, circa 1970.

Herbert 'Herbie' Vanilla (August 1, 1964 - Dismember 25, 2000) is best known as being the Swedish Minister of Culture for most of the early nineties, but also enjoys a cult following as the star of a number of hit Disney movies during his teenage years. Due to a series of comical mix-ups at an Stockholm sperm bank he was born with the body of a 1963 Volkswagen Beetle, though he has never let his affliction get in the way of either his politics or his acting.

Born in 1964 in Stockholm, Herbie was the artificially conceived son of Milli and Iceberg Vanilla, who despite being disgusted to the roots of their souls by their son's automotive appearance, still strived to bring Herbie up as well as they could. An only child, Herbie had trouble mixing with other children, whom by Swedish law are not allowed within 100 feet of any roads. As none of Stockholm's schools were at that point equipped with traffic lights or off-ramps, he was forced to learn at home, where he was schooled by his father, mostly from a collection of whittling magazines and food labels.

Herbie's parents however, could not keep up with the increasing costs of petrol and tree-shaped air fresheners their son consumed as be progressed into adolescence. His mother sold him to Walt Disney in 1972 for an estimated 4000 krona (US$4000) who took him to Monte Carlo, the film-making capital of the world. There, he and Herbie made a number of films, capitalising on Herbies Beetle-body to reach new heights in shock cinema. Horrific video nasties such as "The Little Mermaid" and "The Land Before Time" typecast Herbie into the role of psychotic Volkswagen, who stunned audiences with his stomach-turning appearances, often opening and closing his doors in rapid succession and honking his horn to the extremes that the censorship standards at the time would allow. Off screen, however, Herbie yearned for a more active and varied life, though when he brought the subject up with Disney bosses they put sugar into his anus and scratched his paintwork with their keys.

Herbie was last seen in East Germany, reportedly suffering from alcoholism and drug abuse, just prior to the fall of the Berlin Wall.

During the late 80's however, the executives at Disney decided the mutant car angle was getting stale, with dwindling sales and declining public interest threatening to bankrupt the entire movie industry. Formulating a plan to recoup their losses, Herbie was approached and told he would have to let another actor climb INSIDE him and pretend to drive him about. Shocked by such depravity and unwilling to forgo his self-imposed celibacy, Herbie ran over and killed many of the Disney board of directors in a blind rage, including Walt Disney himself. Gathering his senses, Herbie washed the blood from his chassis in the company carwash and calmly drove back to his native Sweden, using a top secret sub-atlantic underwater tunnel.

Sadly, Herbie passed away on Christmas day of 2000 when he accidentally shot himself in the carburretor with a twelve-bore shotgun while spending the holiday alone, by himself and with nobody. It is believed his suicide was brought on by his latest film with one Lindsay Lohan.