Hummers are a very large notorious land mammal capable of traversing nearly anywhere off-road. Hummers can be seen traversing between the home and the local grocery store 5 blocks away. The Hummer is a preferred sexual position in most cultures. The Hummer is a cross between a holy Mammouh and Arnold Schwarzenegger. Hummers are very similar to cars, particularly SUV's, but despite the fact that they have four wheels, 5 doors, a windshield, a steering wheel and what most Hummer salesman claim to be an engine (though it is actually a device which converts gasoline directly into potent anti-environmentalist gas), they are not cars. In fact they are BEYOND cars.

“Why do we always get hit by IEDs?” 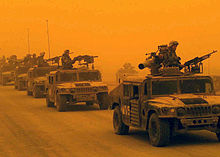 The Inventor of the Hummer in a recent television commercial.

Hummers are a derivative of the Humvee, a large US Military project designed to make a very large, fast moving vehicle that runs on a fuel based off the souls of liberals of all types and Muslim infidels. Hummer 1.0 was introduced by Ronald Reagan as the Volks-Tank in 1984 with many bugs including the No crumple zones, leg room, too smart to fart and carrying capacity. The idea behind the Volks-Tank was that any middle class, right wing patriot could own a very large practical vehicle. If you do not buy this car with a six pack of beer you are queer. Reagan, despite the great president that he was, Dark forces conspired to crush his dream. For the first few months of production, the Hummer corporation was indicted for providing their buyers with free armor-piercing machine guns and grenade launchers when they purchased the "Bang for Your Buck" package, despite the fact they choose to use these weapons to rob McDonalds, Waffle Houses, JC Pennys, Hummer Dealerships and Fort Knox lay with the Hummer Owner.

Two of the common Hummer Drivers that can be seen either in the wild, or at a Zoo near you, are the Rapping wanker, and the militaristic arsehole. Anthony SCHWARSENEZENNNIHITLER is the main pusher of the Hummer Brand name. Or he was, before getting on the prius bandwagon. Unfortunately, he weighed too much and the car's miniscule engine wasn't capable of moving him, so the eco-bastards pushed him off. 10Cent was also known as a Proud Hummer owner, until he realised it was eco-mentalists who were trying to kill him and his gang every time he stepped out the front door. He set his hummer collection on fire on the 15th of Octopustober, creating a plume of eco-friendly smoke.

A typical Hummer. Note that it looks different from others, but it's actually bigger on the inside.

A third group of drivers, although less conspicuous than the first two groups, is nonetheless extremely insidious. This group like the crazed bloodthirsty Amazons is made up completely of females with young children. Their hummers contain characteristic car seats and soccer balls and they can be seen in a continual loop between home, a day care center, an elementary school, and the grocery store. These creatures tend to stay relatively close to their homes. If encountered on the streets keep your distance, for you never know when a cell-phone call or crazed child in the aforementioned car seat could interrupt their predicted path of travel and send them careening into the other lane. Never try to pass, for these creatures are ferocious and will never accept defeat, in peewee soccer games or in driving. If encountered in their natural environment of the youth soccer field, avoid eye contact and move away. Cover the ears of any children if they begin screaming obscenities at the hapless refs

The new H3 shown here with the optional flatbed rear

Hummer corporation owns over 75% of cattle, alligator, and domesticated korean farms in the world.(yes! your sitting on korean skin) All of these types of livestock are used to make either the leather or upholstery in the vehicle. It takes on average, 20 cows to produce one leather seat in the spacious Hummer. Hummer corporation also mines chrome off several asteroids in space. Most Hummers contain 8 cylinder engines. This is actually not true, most Hummers have 8 barrel engines, cylinder is a misused term. Most Hummers due to the forced environmental bolt ons and clean air junk range around 3.14159 feet per liter, or 15 gallons per mile. Without said environmental junk can get on average 12-12.5 miles a gallon both in city and highway.

It should be noted that the Hummer is NOT an SUV (it's a dirty sex act) the H2 is a crossover of a Hummer and an SUV (its either a narrow Hummer or a very wide SUV your pick) and the new H3 is not a Hummer but in fact a pseudo-Hummer as it is too small to be a true Hummer.

Some Hummer owners think that another feature of the Hummer is that it makes their male genitalia appear larger than it actually is. This is in fact the opposite effect everyone else who sees someone driving one knows they got it because they have a bulging pussy and they need the large vehicle to make them think they have dick.

The dude that wrote the paragraph behind me is a douchebag too, but at least he doesn't drive a Hummer.

Hummers are attracted to three things: Racists, conservatives and generally evil people of various types. Hummers can fuel itself off of the blood of living people. However, the Hummer's most preferred partner is a male of any age with an abnormally small penis, pussy, or large firearms.

The New Ultracompact Hummer, designed to compete with the Smart Car. Note: the long length is an optical illusion.

Hummers with the required environmental cleaners and bolt ons are larger polluters than any other cause of global warming today. This includes the ash from volcanoes, the smoke from Rush Limbaugh's cigars, the nuclear radiation from Saddam's Weapons of Mass Destruction, and barley scrapes by Al Gore's internet invention, and everyday living.

Hummers without said environmental bolt ons are for their size and power are very clean vehicles that because of the fact they're military born liberals, hippies, and the sort refuse to give it a chance to prove this.

The Hummer is the official mascot of Freedom and the American way. The anti-Hummer movement has had massive multi-Trillion (With a T) campaign to stop the Hummer since it was adopted as Americas official mascot. Last year, the Hummer gained the "Largest Source of Environmentalist Hatred " award, and the "Most Dead Terrorists" award for the 27th year in a row. In 2006 it also achieved the feat of burning the biggest hole in Al Gore's evil plan to take over the world. 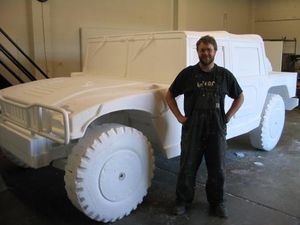 The all new 2008 redesigned Styrofoam Hummer made out of environmentally friendly materials.

Hummer made a unique model called Hummer H-∞, so that Domo-kun could have something to ride in

The Hummer once it's converted to run off of a Mr.Fusion unit or the crushed dreams of tree huggers will continue to serve the US in its role as the world's maid/referee. 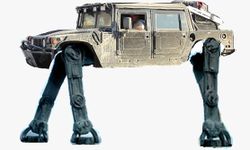 AT-AT model Hummer: For those of you who absolutely LOVE Star Wars.

Cigarettes smoke hummers in the future.[1]