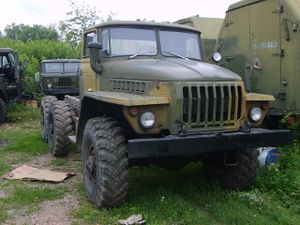 The Ural-4320 6x6 military truck, the most popular model of the company

For those without comedic tastes, the so-called experts at Wikipedia have an article about Ural Automotive Plant.

The Ural Automotive Plant originally began in 1942 as a separate factory of ZIS established in Miass, in the Chelyabinsk region. They started out producing ZIS-5 4X2 military trucks under the name Ural-ZIS. After the war, they simply became know as Ural, and they ran into a problem. The problem was that other companies were coming out with newer & better military trucks, while they were stuck with the shitbox ZIS-5. So for a few years, they just jerked around trying to make a buck, until 1961.

1961 was a MAJOR year for the company, as they finally came out with a better truck: the Ural-375 6x6 military truck. The Ural-375 was a major turning point for the company. With its 6X6 setup, 180 horsepower gasoline engine, & excellent off-road capabilities, the Ural-375 became a popular truck & saving factor for the Ural Auto Plant. Very soon after, the other countries of the Warsaw Pact bought Urals for their armed forces: Poland, East Germany, Ukraine, Czechoslovakia, etc... The Ural-375 was used for a variety of roles incluing cargo/transport, command post, fuel truck, tractor-trailer, etc... It was also the first truck to be used as a transporting vehicle for the BM-21 "Grad" rocket launcher system. Heck, even civilians had use for this truck as: Dump truck, fire truck, flatbed, etc... However, it did have some problems. First of all, the engine sucked a lot of gasoline, and the truck had a low top speed of 75 kph (46 mph in American units).

Eventually, a replacement for the 375 was issued in the form of the Ural-4320. The Ural-4320 was practically the same as the Ural-375, except that it was powered by a KAMAZ V8 diesel engine of 210 hp, & the front end was different, but other than that, there was little difference. The Ural-4320 proved to be even more popular than the Ural-375, and fulfilled all the roles of its predecessor. This truck turned out to be more badass than the 375, & faster, too. The diesel engine was more fuel-efficient than the 375's gas engine, & made the truck go 85 kph (52 mph). Again, the other Warsaw Pact countries snapped this up.

When the Soviet Union fell, the Ural Automotive plant encountered the usual economic problems of practically all other Russian automobile manufacturers. To adapt, they restructured their company extensively to compensate for the times. During this period, the Ural-4320 was switched over to the more powerful YaMZ V8 diesel engine, which spit out 240 hp. Two new products were also introduced: the Ural-43206, basically a 4X4 version of the 4320; and the Ural-5323, a badass 8X8 cabover truck. Today, the Ural Automotive Plant continues to overcome whatever challenges get in its way.

During the Cold War, the Soviet government was just throwing money at all the weapons & vehicle manufacturers to make great products. As a result, many super army trucks were made, and the Ural trucks were no exception. They are able to survive in a variety of climates, drive up steep hills & navigate poorly maintained roads with ease due to their good ground clearance & 6X6 drivetrain setup. Also, with the newer 4320, it is fuel efficient & powerful thanks to its V8 diesel engine. They can also be used in a variety of roles, including: Cargo/transport, tractor-trailer, fire truck, dump truck, pizza truck, SWAT van, Sidecar motorcycle, etc... However, despite it all, they can't go back in time. Get a Delorean if you wanna do that.

Urals are very reliable & efficient trucks, second only to KrAZ, but with a higher top speed.