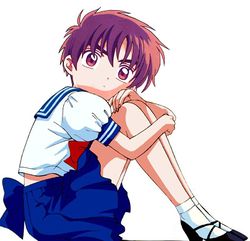 A picture of a cute boy in a dress for your encyclopedic reading pleasures. Nothing to particularly do with cross-dressing.

Cross-dressing is the immoral and perverted act of dressing any particular salad with incompatible condiments.

In 44 BCE, Caesar allegedly ordered mayonnaise on the Roman salad which today bears his name. For this gastronomic crime (and others), he was assassinated with extreme prejudice.

In 33 AD, Jesus decided to have a light vinaigrette on a Greek salad as His last meal whilst being crucified. Apocryphal stories have widely circulated that He accidentally dropped the salad on top of Peter's head when He gave up the ghost. This strange incident has been used ever since by the Roman Catholic Church as their primary legal basis for the institution of the Papacy.

Napoleon allegedly enticed the Empress Joséphine to, quote, "C'm'ere and garnish my celery, bitch!". Needless to say, all of the major European powers were shocked and stunned by this extremely rude behavior of the penile-challenged Corsican despot. Joséphine, on the other hand, was reportedly turned on by the impromptu request, the unbridled whore.

There are no recorded incidents of President Lincoln having practiced cross-dressing. Anything you may have read otherwise is a filthy lie.

In August 1972, President Nixon allegedly had lunch at the prestigious Watergate Restaurant. Nixon reportedly sent the salad back, half uneaten. It was revealed years later that the salad was wiretapped in order to obtain secret video recordings of liberal Democratic chefs engaging in inappropriate behavior while in the act of preparing food.

All salad-related allegations were dropped in 2009.