From Uncyclopedia, the content-free encyclopedia
Jump to navigation Jump to search
Oh, hey there!

For those without comedic tastes, the so-called experts at Wikipedia have an article about Used car. 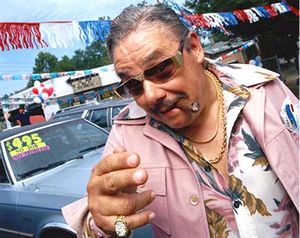 Hey, do you want to buy this? It's only slightly used.

How you doing? You look like a nice young man. Interested in a used car, are you? Well, I can understand that. I never buy anything but used, of course. From myself! Makes sense, I have the best deals! But don't take my word for it. Go ahead, have a look around. We're a low pressure sales spot, we are. I'm not going to hover over your shoulder, trying to tell you what to buy, no sirree. Not Honest Carl, not any day of the week. You go ahead, take your time. I'll just go get you some coffee, shall I? On the house!

Oop, sorry, didn't mean to startle you! I'm like a ninja sometimes, can't hardly hear me coming. Here's your coffee, go ahead, drink up, plenty more where that came from. Nothing like a good jolt of caffeine to get the old brain cells working. Help you make the right choices! Not that I think you need it, not you. You look like a real sharp guy. Snappy dresser, too!

She's a beaut. That's a Fard POS11x, that is. Top of the line, less than two decades old. Got plenty of life left in her, this girl does. They don't even make cars in that color anymore, did you know that? They found it out can cause seizures.

Mileage? Oh, man, does she ever get mileage. She'll go for miles and miles. Look, almost 500,000 miles already. That's the mark of a solidly built car, that is. Now, sure, you might find you're filling the tank up a lot. But that's only because it's got such a teeny tiny fuel tank. Not like these gas-guzzling SUVs with their forty gallon gas tanks. Nah, great mileage, take my word for that one.

Of course, of course! I'll just take a step back. It's just that I get so excited about cars. You can understand that, I'm sure. I was just trying to open the door for you, anyway. I want you to step in, have a seat, give it a shot. It's so comfortable, you just might fall asleep. I'll totally forgive you if you do.

See, there? Isn't that nice? I know it feels a little sharp here and there right now, but it'll get used to you. Soon your butt won't even notice the springs and you'll be driving along feeling like you're riding a goddamn cloud, motherfucker.

No, I don't find it resembles a dead hobo at all. Don't worry about that. They found out that the artificial new-car-smell sprays we've been using for years cause horrible, horrible cancer. So we've mostly stopped using them. We're trying out some new ones. This one's testing real popular with the ladies, real popular. It's called Utter Manliness. Your girlfriend will tear the crotch out of your pants when she smells it.

And I'll tell you something else about that car.[edit]

This car - I shit you not - was personally sold to me by Jessica Alba herself. Honest injun. Your butt cheeks are currently occupying the exact same tush-space that Jessica Alba's own heavenly posterior once used. You're using Jessica Alba's very own butt-crease. When we first got this car, I just sat in that seat for like ten hours straight. It changed my life, and not for the worse.

Just like real men drive. REAL men, you know what I'm saying? This is the kind of car a lumberjack would drive out into the forest for weeks at a time. I know it looks a little bit odd - she's a Finnish model, you know - but it works just like you'd expect, only backwards. So, first gear is on the opposite side. No, the right. Opposite diagonally. So, at the bottom. There you go. And second gear is beside it. No, to the left of it. At the bottom, again. Right, there. And then so on. Reverse, just like you'd expect, is at the top right. It all makes sense, once you get the hang of it. I'm sure you'll have it down pat in no time.

Ha ha, no! You're a card. You still turn the steering wheel the same way you normally would. Sheesh, look at you. Mister joke man.

The backseat is pretty big, too.[edit]

Good for those nights out on the town with the boys! We all love that, don't we? Man, it's been a while. Wanna hit a strip club after you buy this car? Maiden voyage, you and me! Whaddya say?

Okay, rain check, then. But the point still stands. You could fit two of your friends back there, easy, as long as they're little guys and they're really, really good friends. Like, really good friends. Works the other way, too. I once had two totally hot straight chicks come in here to take a look at this car, and they both got in the back seat to see how big it was, and before I could blink twice they were totally making out like wildebeests. It was hot. Like, really hot. That's the only reason this car is still here, my friend. They got so into it they left together, and just plum forgot to come back. That makes this your lucky day.

Check out the trunk. It's huge. I mean, I think there's some weird spacetime shit going on here, because this trunk is bigger than the actual rest of the car. I had a partner once, worked here with me, crawled in there to try and find the back of it. Never saw the poor bugger again. I told him he should bring more supplies and leave a trail behind him so he wouldn't get lost, but nobody listens to ol' Carl. Nope.

Anyway, here it is. I'll just pop it open for you, nice and easy. The keyhole is right here, behind this logo shaped like two K's back to back. You just swivel it at the top, here... Just, grasp the bottom, and it turns, easily... You...

Here, hold the keys for a second, I need to use both hands. That should do it. It never does this, I promise you. Murphy's law, right? If something CAN go wrong, it WILL do so in front of a customer! Haw, haw! Just my little joke.

Seriously, you little bastard, turn, come on. What the hell is wrong with this thing? Maybe if I pull here... Ah, there we go! See, not the car at all, it just turns at the bottom. Doesn't make much sense, but you know Finland. Weirdos, the lot of them, but they make a solid vehicle. Anyway, here we go, key goes in, and pop goes the weasel.

You could fit enough groceries in there for a year. Go ahead, have a peek. If you see Larry, let me know, will you? We figure he's still in there somewhere.

No, no, I'm just kidding. Haw, haw! There's no way this trunk ever had a dead body in it.

That? No. Listen, I know what dried blood looks like - boy, do I - and that ain't it. Remember I told you this was Jessica Alba's car? Well, I asked the same thing, and she explained it to me. She's a chocolate fiend, you see. Loves the stuff. How she stays so thin I'll never figure out. Don't tell anybody, she doesn't want the press to know. But she buys in it bulk. Makes sense, right? Look at the size of that trunk! Why wouldn't you buy things in bulk? So she's got this huge load of chocolate, see, and it's a hot day and she doesn't realize how hot it was getting in that trunk, and a whole bunch of it just up and melts and soaks right into the fabric there. Poor girl! She must've been fit to be tied. Dried blood is almost as hard to get out of fabric as blood is, I'll tell you, and after a few years they look just the same. Exactly the same.

We're both businessmen here. We know how it works. That sticker? The one I stuck to the windshield there with industrial strength airplane glue? It looks like it says $18,000. And for most people, well, that's what it does say. But you, you and me, we got a bond. We're tight. If we were gay we'd be soulmates. I can tell. I know it. I feel like I'd known you for years the moment you stepped in here. That's why, for you, that price sticker does not, in fact, say $18,000. That's why, for you, what it says is $15,000.

Ain't that something? That's $3,000 you just made, pure profit. I suggest you blow it on a fancy gold necklace that says 'Pimp' in diamonds, because in this car, that's exactly what you'll look like.

In fact, if you have $7,000 on you, right now, you can drive away in this car. Right this moment. You slip me the cash, I slip you the keys, nobody needs to be the wiser, right? I can do that. No taxes? Lower price for you. I love it when everything works out for everyone.

Look, I'll level with you. My daughter, Mary-Ellen, she's got terminal earwax cancer, from all that new-car-smell. It's bad. I need money, and I need it now, and I can't go back to giving out five-dollar blowjobs in the men's room. I just can't, I have bad knees. So I can do this for you, I can sell you this car for only $5,000, even if it means I'm taking a loss. It's a low blow, I thought we were friends, but man, my daughter is so, so sick. You wouldn't let her keep suffering, would you? I know you, you're a good person. Just look at her, she's fucking adorable.

The operation? It's $3,000. That's all. So if I can scrape together three grand, I can get it done. I won't be able to get her all the counselling and physiotherapy she'll need - having an earwaxectomy isn't something you can just walk off, you know - but at least it'll get the surgery done. That's enough. Just having this whole thing behind me will be worth the massive financial loss I take on this car.

Okay, so I don't have a daughter. You caught me; I'm caught. The picture came with the wallet. But my rent is coming due, and- no, I'm serious! My landlord, he's a real piece of shit. I think he's Canadian or something. If I don't give him something, I'll be out on my ass. You don't want that, right? We're buds! We go Used car way back!

Leave! I don't need you anyway! You OR your stinking $1,500! Go on, get out, and take your thousand dollars with you! Beat it! Piss off! Scram! Vamoose! Asta la vista! Make like a tree and get the fuck out!

We still on for that strip club later?