For those without comedic tastes, the so-called experts at Wikipedia have an article about KrAZ. 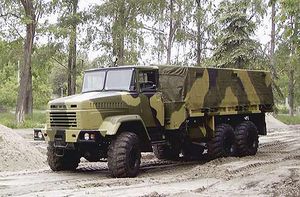 The KrAZ 6322 6x6 military truck, one of the company’s newer models

KrAZ (Ukrainian: Кременчуцький автомобільний завод - КрАЗ = Kremenchutsky Avtomobilny Zavod = English: Kremenchuk Automotive Plant That Makes Super Awesome Off Road Trucks of Indestructible Type) is a Ukrainian truck manufacturer that manufactures super-badass off-road & on-road trucks. Even when they’re not off-road trucks, KrAZ trucks are still badass. They’ve been through some hard times (and soft ones, too), but they’ve made it because they’re too cool to die. Now, let’s get on with the boring history shit or something.

After World War 2, the Ukrainians were almost totally dry of money, so they needed a way to produce more money. So, in 1946, they began constructing a factory in Kremenchuk, but they had a tough time deciding on what it should produce. So, even after the factory was finished, they spent a few years jerking around until someone had the idea of producing combines. They began combine production in 1956, but it made too little money to be successful, so that was shoved down the toilet.

Then, somebody had the brilliant idea to produce trucks, and it was at that point that they conducted experiments with injecting Chuck Norris’ DNA into ordinary 6x6 trucks. Why they chose to do this is a mystery, and shall always be because of the Soviet Union’s secretoness. The result was the KrAZ-255 off-road truck. It was like nothing anyone had ever seen before. With its massive off-road tires, high ground clearance, & large size, the KrAZ-255 was the ULTIMATE off-road heavy-duty truck. It was a great success for the company. The initial batch had sold out within the first day of delivery, and as a result, the Ukrainian economy was revitalized.

However, there were problems with obtaining more of Chuck Norris’ DNA, so they made more of it using top-secret Soviet replication techniques. Then, one day, someone accidentally injected a non off-road truck with Chuck Norris DNA, and the resulting truck, although not as badass as the KrAZ-255, was still really badass. This truck was designated KrAZ-256, and it made even more money for KrAZ, as not everyone was looking for an off-road truck. In 1971, for their contributions to the Soviet Union, KrAZ was awarded the Order of Lenin.

Eventually, it was decided that, though they were really badass & all, the KrAZ-255 & 256 were looking old-fashioned compared to newer trucks, so in 1982, new replacements were issued in the form of the KrAZ-260 6x6 truck & KrAZ-261 6x4 truck. Both trucks proved even more popular than the KrAZ-255 & 256 that they replaced. After the fall of the Soviet Union, the plant had fallen on some hard times. At this time, they founded the group “Foreign Trade Firm KrAZ” for the purpose of exporting their badass trucks. It was also at this time that the KrAZ-260 was redesigned & improved as the KrAZ-6322. Other new models, such as the KrAZ-65101 6x4 & the KrAZ-7133H4 8x4 were introduced in these post-Soviet years. Today, KrAZ is the most popular Ukrainian truck manufacturer ever.

As explained earlier, the reason that KrAZ trucks are so badass is because they have been injected with some of Chuck Norris’ DNA. The off-road models also have HUGE off-road tires, high ground clearance, & are just HUGE all around. KrAZ trucks are powered by YaMZ diesel engines, which have a horsepower output from 240-330 hp depending on the model. Sadly, they are not available in the USA for some reason. Maybe those Americans don’t know shit about what they’re missing, they're happy with their shitty Hummer H2's, which have the huge fuel consumption they want, while sacrificing the penis they don't need.

KrAZ trucks are available in a wide variety of applications, including: cargo/transport truck, tractor-trailer, fire truck, garbage truck, dump truck, etc… However, they cannot go back in time. Heck, they can’t even go 88 MPH. They can only reach 40 MPH. If you’re looking for fast, then you’re an idiot. Go screw yourself. If you’re looking for mondo torque & towing capacity, then we’ve got your truck right here, fella! And while we’re it, have a candy bar!

(NOTE: Feel free to add to this section, dudes)

Some KrAZ owners have actually ripped off jokes about Ladas, changed them around a bit, & called them original. Here’s a list:

What do you call a Ural on steroids?
A KrAZ.

What do you call a KrAZ full of food?
A supermarket.

What do you call a convertible KrAZ?
A truck where some schmuck just chopped off the roof to make a convertible. Factory-made KrAZ convertibles don’t exist!

What do you call a KrAZ with no doors or windows?
Counterfeit.

How many people in a KrAZ?
As many as they want!

How do you overtake a KrAZ?
With a Ural.

What is the difference between a KrAZ and the flu?
Americans have had the flu.

What is a KrAZ in 6 meters length?
Broken.

How many people does it take to build a KrAZ?
None. The parts are too heavy for them to lift.

How do you reduce the wait for delivery of your new KrAZ?
Bring back political crime in Ukraine.

How do two KrAZ drivers recognize each other?
If their truck cabs are the same height.

How do you know that your KrAZ has been burglarized?
If there's some suspicious character who has been paralyzed by the sheer awesomeness of the truck.

Did you hear about the dude who had his KrAZ broken into?
The thieves turned themselves in to the police after several million unsuccessful break in attempts!

What do you call a KrAZ driver who says he has a speeding ticket?
A liar. He probably had a Ural.

Why are KrAZ drivers like Iron Man?
They both fill their victims full of dread.

What is the similarity between a KrAZ and Leonid Brezhnev?
Neither are actually from Russia!

What's the difference between a KrAZ and a dragon?
A noble knight can slay a dragon.

Whats the difference between a KrAZ and a tampon?
The tampon will fit in any vending machine known to man...and several known to monkeys!

I had to part with my KrAZ as it was costing too much,
Those huge tires were too hard to find.

How do you double the value of a KrAZ?
Give it a cool paint job.
Bolt a laser cannon to it.

Can Ural accelerate to 120 km/h?
No, unless you strap a jet engine to it.

What occupies the last 6 pages of the KrAZ User's Manual?
The political enemies of Soviet Ukraine.

What do you call a rusted KrAZ?
An abomination of mankind.

How do you recognize a KrAZ Sport?
When there's a basketball, football, baseball, or such painted on the side.

What do you call a KrAZ with twin exhaust pipes?
A battleship cannon.

What do you call a KrAZ with automatic windows?
The new 2022 model.

Why does a KrAZ have a rear windshield wiper?
To remove the cars that crash into them.

Why does a KrAZ have heated rear windows?
To incinerate nosy drivers behind you.

Why does a KrAZ need one spare wheel?
Because it's not a Lada.

A guy goes into his local garage and asks "Do you have a windshield wiper for my KrAZ???"
"Are you stoned? You must be in the wrong joke" replied the man in the garage.

What do you get if you fit a turbocharger to a KrAZ?
A Ural.
A Dream.

KrAZ trucks are super-reliable & super-awesome. They will hardly let you down. They are also the best in many areas such as: off-road capability, towing capacity, coolness, etc… In addition, the company KrAZ has been around for a long time, so their trucks are proven tough shit. So, the name of your heavy-duty truck should be KrAZ. If it’s not, then YOU SUCK !