How To Play the Skin Flute

The Skin Flute has greatly increased in popularity due to additives that can increase comfortable playing time by nearly four hours.
The skin flute is a musical instrument of the woodwind family. Unlike other woodwind instruments, a flute is a reedless wind instrument that produces its sound from the flow of air against an edge called "blowing". The size and shape of a skin flute is both wide spread and varied, from the 3 1/2" "Pee Wee" through to the related hybrid Pink Oboe some of which have been known to top 14 inches, with substantial girth.

The Skin Flute is traditionally not a difficult instrument to master, although some might argue that it is an acquired taste, egged on by a deep desire to play with it and lave attention on it...  (more...)

Music in the News

Lars Ulrich to join Alvin and the Chipmunks

At 11:43 last night, authorities were called to a home in California, where Theodore Seville, the drummer of Alvin and the Chipmunks, was found overdosed on a mixture of cocaine and sherbert. He was treated in hospital and discharged this morning, but his bandmates were furious and immediately fired him. In a statement, Simon said that "We have always been proud of having no drugs in this band, to the point where we refused to go on tour with The Jonas Brothers. For Theodore to undermine that is disgusting."  (more...) 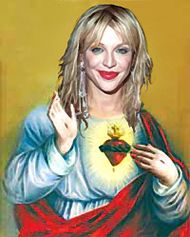 The Messiah, according to Courtnology. Unlike prophecies, this is based in fact.
Image Credit: Tenn
edit

David "give it here" Bowie (January 23 1889 - August 12 2016) is the pseudonym of former London second-hand car salesman David "Yeah, course it has an MOT" Jones. His chief claim to fame was his portrayal of a bi-sexual Alien in the early seventies.

He has largely continued an unsuccessful career to the present day though bit parts in mediocre films and jumping on the latest bandwagon in Music.

Jones landed on Earth in the late 1940s, a turbulent time for Britain and the world. His early years were characterised by being bored and indulging in whatever sexual endeavours he could find. Jones would later admit to being "Try-Sexual", much to the astonishment of '90s media...  (more...)

Lyric of the Week

“No, I'm not a stranger Look! I have an umbrella!”

— From the UnTunes song: You can stand under my umbrella (you can also feel my antenna)

Not to be confused with Piña Coladaburg, this song is sung to the tune of Jimmy Buffett's Margaritaville.

I know that it's dirty

But I'm over thirty

And I ain't got no woman to soil

Layin' around in Piña Coladatown