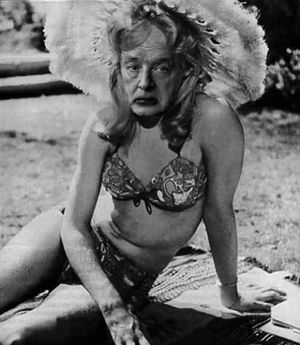 With weak-kneed ecstasy I came face à face with my Riviera love. It was the same child -- the same tender lips, the same fey smile, the same diaphanous downy wrists. Oh, Mnemosyne!

“Ladies and gentlemen of the jury...”

“‘Old man’? ’Book by Nabokov’? First of all, I wrote it. Second of all, has Sting looked in a mirror lately?”

– Humbert Humbert on not standing too close

Nabokov, instigator of irony, agent of alliteration. My sin, my soul. Na-bo-kov: The tip of the tongue touching, timidly, the teeth and resting as two rapid rushes of air adds, softly, their respective syllables. Na. Bo. Kov. He was Владимир, plain Владимир, in aristocratic Saint Petersburg. He was Sirin in Berlin. He was Vladimir Vladimirovich Nabokov on the dotted Line. But in my hands he was always Nabokov.

The second section of this arid article, this lyrical, lilting lemma, would as doctrine dictates, as forced by formality, be dedicated to biographic information. Ladies and Gentlemen of the jury, pay heed, focus your unsleeping minds, and do not miss a word, for in this squabbled skein of sentences lies the life of our knowledgeable Nabokov, our vivid Vladimir.

How, then, did it all begin? When was it that the nubile Nabokov first felt that disturbing light of life? When took he, protagonist of our petit histoire biographique, his first breaths in the opaque air of old Saint Petersburg, city of Surikov, burg of Brodskij, town of Tolstoj. It was the cold, unforgiving spring of 1899, the tenth day of avril on the Julian calendar (precision is key in our modest exercise in deceptive history) (Note: I notice the slip of my type in the preceding aside, but please do not correct it, O Ruthless Reader). The nubile Nabokov learned his languages early, indeed; someone more romantic than myself might say he had always been trilingual, from the very moment he exited that blessed bastion of solitude, that warmest of wombs.

What follow, inevitably, inescapably, are the travels of our young auteur. With that remarkable restlessness that will often grace the aspiring author, veracious Vladimir took to visiting the statliches Berlin, the clair Paris and various other majestic monuments of human history.

For those without comedic tastes, the self-proclaimed experts at Wikipedia have an article about Vladimir Nabokov.

I hope you will forgive me, at this point, my stringent, immovable fortress of a reader, the following exercise. I will embark on a very simple summation that will ask much of your resolve. It is, however, a necessity, if I am to convey the complexity of the case. It is a poem I know by heart:

A poem, a poem, forsooth! Such reads the vociferous Vladimir's Anglo-Saxon enterprises.

But no introduction to the then nascent Nabokov could be complete without at least some mention of his jeune passion for chess, which, in his native, nimble Zemblan tongue, he referred to as lepidoptery. Here is one of his most acclaimed compositions, an issue illustrating the devastating development of his signature opening, the Luzhin defence. Black to play and lose:

Oh, he has only the pieces to play with! If it were perhaps possible to simply will this article out of existence, and (as destroying an article about a Russian author is to enter the highest level of insanity) if no one could notice, would it be done? Perhaps in the 18th century, but in the 21st you must be a Scientist, a bird, a very bird, a bird! Repeat 'til page is full, printer. Oh, but we're getting off topic. Let us have a little fun, too.