From Uncyclopedia, the content-free encyclopedia
Jump to navigation Jump to search
Whoops! Maybe you were looking for Russian Roulette? 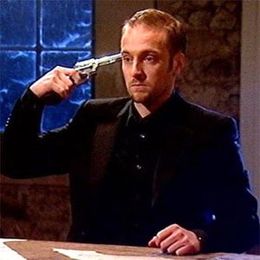 Life got you down? Got both a gambling and a risk-taking itch you need to scratch at the same time? Got nothing to do on a Friday night? Well then, just grab crazy Grandpa's old handgun for some Russian roulette, gather round a handful of your chums or family members around the fire, and get ready for the (last) night of your lives!

Before you start playing, it's important to realize that there are several other methods to play this game. The typical orthodox method involves a single working handgun with either a rotary set of chambers or a semi-automatic with a hideously defective magazine. However, depending on your tastes and testes, other variations are available. For the weak hearted, one can use a water gun in its stead (pump powered models are not advised). If you're more hardcore and/or live next to a major military arsenal, fully automatic weapons can also be used. These variations are almost universally shot down by one out of six purists, such as roulette enthusiast Sly Simmons. Mr. Simmons had been available to comment, but was sadly no longer available at the time his interview was published, so his comments will be thoughtfully restrained in his memory.

So you've finally got your friends and family all gathered up together around the table, grandpa's aforementioned six-shooter lying like a grim monolith in the center. Got less than six friends? Feel free to grab the gun and start playing! If not, this next step can be the hardest.

You must decide who, among your 6+ friends and family, will play and who won't, so choose wisely. It is recommended you don't cut any young and aspiring children you have, as they will be fascinated just to hold the gun and letting them down would probably make them cry. Any older children should also be allowed to play, especially the more promising and smarter ones, as a lesson in gun safety. 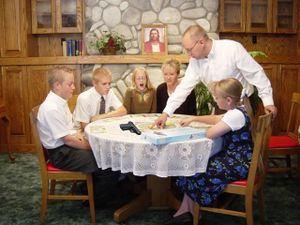 Dad ought to consider letting Billy and Joel play the next round, they can't get their eyes off the prize

Enough of that, let's start already!

The rest of the game is simple as pie. Just take Granddad's revolver, put in your lucky bullet, and spin the chamber. If the number of players in the game is on the larger side, it is recommended you start with the first person to your left so most of the chambers would be expended by the time it's your turn. If you're not playing with so many people, you should just grow some balls, because you'll have to go sooner or later.

To ease the mood in the room, you and your family/friends should just imagine that it's a joint they're passing around instead of a revolver, except this joint could actually ruin your life. It is not recommended that you actually pass around a joint during play, as it is bound to screw up the aim of the gun a little bit. Also important is that you make sure your younger opponents know to point the gun at their own head, as pointing at other people is very rude. There's always a lesson to be learned.

Don't start fussing about it, the show must go on. Just pry the gun from his cold, dead hands and continue playing. This is, after all, either an important betting game or a family exercise. In the prior case, the pot isn't taken until there's only one left able to take it, and in the latter it just wouldn't be fair to the rest of your family if they didn't get a chance to go yet.

As for the body, you can always clean it up later. Worst case scenario, the maid could do it on Monday. Just load another bullet into the chamber and take it from the top.

Here are some helpful tips and endgame strategies:

Don't have many friends, though? Then perhaps you should consider playing Russian roulette alone. This, however, is not recommended, as straight-up suicide would be a lot less tense and more economical. When played solo, the game is accomplished in, at most, six easy steps.

This is by far the easiest step in the game. Just put the gun to your head, pull the trigger, and the overwhelming majority of the time you'll hear the click of triumph. Good job! Don't get too comfortable though, there are still one to five more chambers to pump through before feeling the bloody rush of victory. 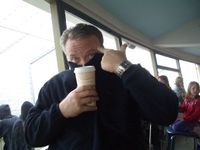 You're doing it wrong

Splendid job not getting too comfortable, because your alertness during this relatively safe point in the game has given you the second click so far. Not really, actually, since it was all luck, but at least you'll keep your wits long enough so you could blow your brains out later.

Did that last comment put you off? Because I can see your hands shaking now, and it looks just dreadful. An important part of the game is to keep your hands steady, not like it will affect your odds, but so that if you lose you won't have to go find a steak knife to finish off what an indirect hit started.

Anyway, prepare to steady those hands at least one more time, because there goes the click.

Damn, you're really looking terrible now. Maybe playing this game isn't exactly the best thing to do for someone in your condition. Seriously, don't bother with all this tension if you're going to play solo, just grab a semi-auto and put yourself to sleep the easy way. Suicide is painless, after all.

This game, on the other hand, also appears to be physically painless at the moment, as you just heard another click.

Satisfied you got up to here? You're not? Oh yeah, I forgot, you wanted to die. Well, it looks like you've finally met you're match: the infamous Round 5, also known as dead man's round, is the number one killer in the Russian roulette industry. Five out of six times it is always fatal, every time. Round six technically has a bigger percentage, but... let's at least wait to see if we get that far.

Are you ready for the end? Well guess what, add another click to your resume because that bullet just didn't follow through.

Well congratulations, you've exhausted 5/6 chambers in your gun, so the last one is bound to make you bite the bullet. If you're going to continue from this round and even just try to play round six, then you seriously have a death wish. You say you're going to do it? You're fucking crazy, man.

You really are fucking crazy! Well, you asked for it. But before you go, let it be known that not only are you incredibly stupid and crazy, but you're also really goddamn brave. If you weren't extremely suicidal and just doing this as an alternate way to kill yourself, then you'd be the bravest man to ever live. Cherish that title while it still lasts. But anyway... 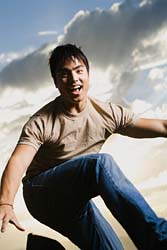 Whoop-dee-do, you're alive. You frickin' loser.

What the hell? Looks like you've loaded yourself up with a dud right there doc. Wow. Bravest man ever to walk the earth? Screw that, you've probably purposely loaded the dud in so you can catch the end of this tutorial alive, you chickenbellied yellowshit. The other five alternate yourselves put you to to shame, they went out like real men.

What's trying to be said is that the whole point of winning Russian roulette is living just to die another day. So go out there and enjoy the sport, because now you're the best trained man in the business. Bonne chance!

Featured Article  (read another featured article)
Featured version: 5 August 2007
This article has been featured on the front page. — You can nominate your favourite articles at Uncyclopedia:VFH.