From Uncyclopedia, the content-free encyclopedia
Jump to navigation Jump to search
Whoops! Maybe you were looking for Lighter? 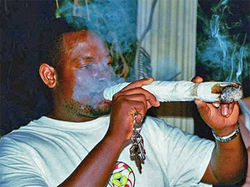 In the old days the Indians (both sorts) smoked their ganja using 'peace' pipes which were shared between friends, and at important occasions when everyone wanted to get off their tits. Unfortunately today with the invention of paper, and the things which can be done with it the world has now changed. All the Indians have now been shot, and the smokers who are left are moving away from the more peaceful pipes towards what we know to be the modern paper rolled joint.

How to make a joint[edit] 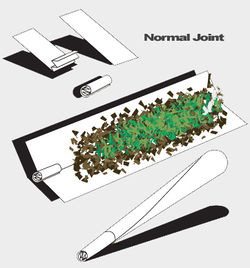 Ever since Shakespeare's Othello featured a black man on crack, many European artisans have developed the art of making a joint. The steps involved are:

Perfectly rolled joints are nearly impossible to obtain for the amateur as rolling technique skill is usually directly proportional to the level and number of years of addiction of the smoker. A rule which does not apply for Rastafarians who are able to roll perfectly at birth. People who have been smoking for many years may be able to roll several joints at the same time whilst performing other tasks such as reading, walking, driving or talking to a police officer. If you manage to find a really classy joint, keep it to yourself, and whatever you do don't smoke it! Well, maybe smoke it.

Virtually none whatsoever. Despite the recent (and very welcome) improvement in modern marijuana provided by the American military, smoking joints remains completely safe, and overdose is impossible. Knowing in advance that one day man would pick the marijuana plant and put it in his pipe and smoke it, nature programmed him that whenever he was getting too stoned he would automatically feel the need to lie down somewhere for a while, or at least stop smoking for a bit. This combined with the increased difficulty of rolling another joint when you get progressively more stoned ensures that smoking marijuana is almost completely safe with the exception of Ankylophobia.

Some experienced smokers may become a victim of Ankylophobia or Joint Phobia.

As has been shown, smoking Joints is virtually completely risk free, with the only possible exceptions being the schizophrenia, and lung cancer.

For those without comedic tastes, the self-proclaimed experts at Wikipedia have an article about Joints.
Retrieved from "http://en.uncyclopedia.co/w/index.php?title=Joint&oldid=5933971"
Categories: