Euphonium , (from Latin Euphonium, the God of Kinky Sex) also known as Eupwnium and God's instrument, is a chemical element with an atomic number of 115. It derives from the Geek word Euphonos, meaning "good in bed" or "ooh, shiny." The glowing metallic substance was originally discovered by Ferdinand Sommer of Weimar while on a mining expedition to Japetus (see pic to view as raw ore). (Japetus is also known as "Zeta Reticuli", which means "The Z-Shaped Net".) Euphonium exhibits many fantastic properties which can easily be applied to many lucrative industries, the most popular being interstellar transportation, transcendental sex trips, and musical instrument manufacture. Euphonium is quickly gaining popularity over the substance known as "Baritonium" which, for a long time, was actually thought to be a crude form of Euphonium.

Most Euphonium players are tromboners, trumpeteers, and clarinetologists who have come to the dark side under the knowledge that it has cookies of a delicious nature. Much like singing, anyone can play Euphonium, but only true greats, such as Darth Vader, Jeremy Martin, Karl L. King, and Batman can play with the glorious tone given the beast by the most holiest Creator, may bees be upon him for eternity. The tone of the instrument sounds like warm, velvety dark chocolate drizzled over a muffin sitting in Megan Fox's cleavage. What does it take to achieve such a glorious tone, you may ask? The answer is very simple, and best explained through song. Because of the tendency of all other instruments to sound like crap, many composers write many intricate and difficult passages for other instruments which are then doubled on Euphonium, knowing that the Euphonium will be able to play the part when other instruments can not. A notable example is Barnum and Bailey's Favorite by K.L. King, where the Euphonium is doubled on many parts. Eventually, King gives up and just hands the melody over to Euphonium. This is actually a very common occurrence in many marches, such as The Melody Shop (also by K.L. King), infamous for its prominent (but pretty easy) Euphonium part during the trio.

The True Purpose of Euphoniums[edit]

The true purpose of the Euphonium as an instrument, born in 1843, was to announce the coming of the devil, Adolphe Sax, who created such vile genetic experiments as the Saxophone and the Saxotromba. He then attempted to band together with the orchestra to give free donuts to the entire population of the earth. Oh, wait, no, he's going to rape them. The villain even tried to claim the Euphonium as one of his, but Gustav Holst proceeded to write epic solos in his First Suite in E-Flat, and Batman proceeded to produce these solos with warm, chocolatey, Megan Foxy tone. Adolphe Sax was overcome by the sheer sexual amazingness of this, and was destroyed forever, unless the director sees a chance to make a sequel. His mutant creations, however, live on, and mostly make a living playing jazz music on street corners.

For spacecraft applications an appropriate amount of euphonium is milled into the shape of a sphere. This sphere is then bombarded with a stream of positrons (a.k.a. positive energy) which causes it to emit euphorions. When manipulated by waveguides, these euphorions can be directed to form a cloud of euphoria around the spacecraft, causing a very powerful positive uplifting force. Control of this force is a simple matter of throttling the amount of positive energy being ejaculated onto the sphere of euphonium. Yaw, pitch, and roll control is achieved by simply spinning the sphere in the desired direction much like a track ball.

The drug known as Euphonium™ is not the pure metal but is actually the positively charged ion Euph3O+. Its scientific name is triphonium oxide. It is a product of the self-ionization of euphonium. It takes a formula structure not unlike that of hydronium, except the hydrogen is replaced by its counterpart, with three Euphonium atoms (Euph), one of which bears a transcendental charge, and one orgasm atom (O). As self-ionization is an equilibrium reaction, Euphonium™ can produce euphoria, and euphoria can produce Euphonium™. As a result, Euphonium™ is often said to feel very pleasant, harmonic and transcendental due to its close, intimate relationship with euphoria, as they both have orgasms.

WARNING: DO NOT ATTEMPT TO USE YOUR MOUTHPIECE IN ACHIEVING THESE EXPERIENCES. IT WON'T WORK, AND EVERYONE WILL LAUGH AT YOU.

However, the production of Euphonium™ in this self-ionization equilibrium reaction results in the production of euphoxide, which is the non-transcendental, decadent side of euphoria. It occurs when the euphonium atoms do not balance out the sheer overwhelming power of the orgasm atom and is further overwhelmed with too many electrons. Unlike its name suggests however, euphoxide isn't the same as euphocide (a killer of happiness), but it is too decadent to bring about true euphoria. Euphonium™ and euphoxide must combine with each other in order to form euphoria, while euphoria can break down into Euphonium™ and euphoxide, despite being opposites in some respects. This paradoxical nature is similar to yin-yang duality.

Users of the drug report a feeling of euphoria, intensified sexual appetite, loss of inhibition, weightlessness (figuratively and literally), and having sexual experiences with higher dimensional beings, spirit guides, woodwinds, and, in one case, an Oldsmobile. The utterances of these other-worldly beings are usually referred to by the addicts as "euphony", a "flowing and aesthetically pleasing speech", and is believed to contain subliminal messages. This subliminal messaging has led in part to the banning of whatever substance we're talking about in many countries for its psychedelic properties. 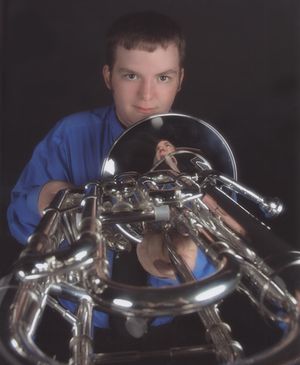 A euphonium player prepares to have transcendental sex. And not just any sex. A four-way with Megan Fox, Catwoman, and YOUR MOM.

Abused by many, Euphonium™ has become a staple of modern drug-awareness campaigns to attempt to help addicts (left). Although largely unsuccessful, these campaigns have resulted in some progress but mostly complete and utter failure due to the fact that the best reasoning people could come up with to stop is that "it isn't fair that you get to use it and we don't."

Note that due to the theory of quantum mechanics regarding charge-cloud models (named after castles on clouds, a category of shamelessly idealistic, wistful, fanciful models that verb euphoria), euphoria's boundaries are loosely defined. This has led to some dispute over what euphoria "truly" is. The theory regarding charge-cloud models has also impacted the definitions of many other atoms, including euthanasia. This is why philosophers can't seem to come to terms on definitions of anything that's shamelessly idealistic, wistful or fanciful.

Euphonium™, euphoxide, orgasms and euphogen, components of euphoria as a whole are force-carrier particles of eudaimonia (Aristotle's "good spirits" - gosh his liquor tasted good!) commonly found in Happy-land. This gives it many nicknames, such as Baritone (which is in fact its evil twin brother) and OH MY GOD IS THAT A SHOULDER CANNO-.